Well, a pretty bad one, anyway. In 1964, DC decided to team up their two biggest teenage characters, Robin and Jimmy Olsen. So in World's Finest #141 we got the origin of the "Olsen-Robin Team": 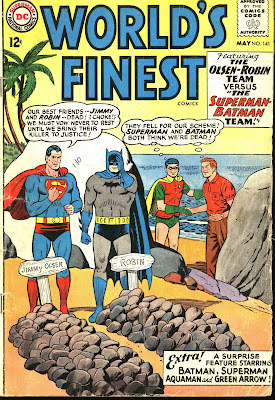 It's a classic DC puzzle cover. Why are Robin and Olsen faking their deaths? Well, it's a little complicated. Some crooks were planning to kidnap them so that Batman and Superman couldn't capture them when they robbed the bank. And they couldn't just hide out in the Batcave or the Fortress because: 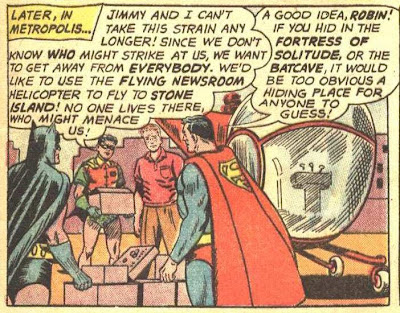 Yep, too obvious. The crooks would figure out that they're in the Fortress, go there, pick up the giant key and... okay, it doesn't make any sense. But at any rate, they go out to Stone Island, rig up the graves to convince Batman and Superman that they're dead, but the latter don't broadcast the news to the world, so the crooks go the Fortress, pick up the giant key... errr, we'll just ignore that plot hole for now.

While they're off on their own, Robin and Olsen set up their own little hideaway: 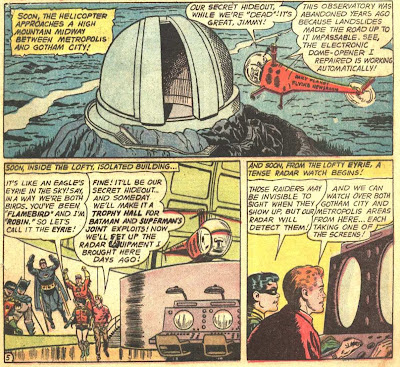 Eventually the crooks are caught and Robin and Olsen plan a surprise return to the living. But (as must always happen in such cases) Superman and Batman had figured out that the lads were still alive.

But that's not the worst mistake ever. No, the worst decision came a few issues later, in World's Finest #144. In that story, Jimmy is temporarily contaminated with Green Kryptonite, just when he's "needed" to help Superman battle Brainiac, heh. Supes gets the brilliant idea of switching junior partners with Batman, who needs a bow-tied cub reporter to help him handle Clayface. So Batman heads off with Jimmy, and a few panels later, it happens:

Oh, my! I suppose what happened is that Mort Weisinger (the editor) was planning on doing more with the Robin-Olsen team and thought things would go easier if Jimmy knew their secret identity, but it's an absurd moment. First, remember that Jimmy's big friends with Superman, not Batman & Robin, and yet he doesn't know that Clark Kent is actually the Man of Steel. If his best friend doesn't trust him with the secret, why in the world would Batman?

Second, it was a cliche of the comics that anytime anybody knew a superhero's secret identity, he would immediate find himself blabbing it accidentally, somehow. I would be very surprised if there wasn't a Jimmy Olsen story out there with that exact theme, but here's a bit from Batman #71 as a placeholder: 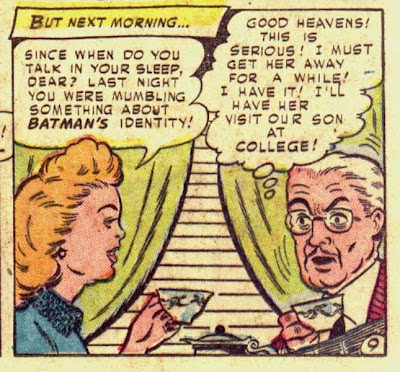 DC had sold us on the idea that the secret identity was sacred, that it had to be protected at all costs. Part of this is to give the hero an additional way to lose, since the ultimate loss (death) is basically out of the question. So to have Batman just casually tell Jimmy is completely out of character.

And as it happened, the Olsen-Robin team was basically through at this point: 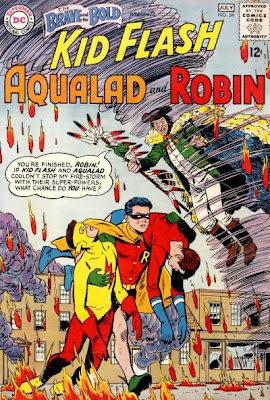 Update: I should add that there was actually at least one more major Robin/Olsen teamup in World's Finest #147 (February 1965). Jimmy and Robin withdraw from their respective partnerships with Superman and Batman and join forces with each other. However, they accept rewards and use the money to build a rocket ship. Eventually Superman figures out that it's because of some alien jewel lifeforms who have taken over the two boys.
Posted by Pat at 12:47 AM