It's well-established that prototypes for many Marvel characters appeared in the horror mags the company specialized in prior to the release of Fantastic Four #1. But it also appears that Stan Lee wasn't above lifting a hero or two from his competitors as well. I had always known there was a Batman story featuring the Mighty Thor out there, what I did not realize is that it so clearly presaged Marvel's later character.

Here's the cover of the issue in question: 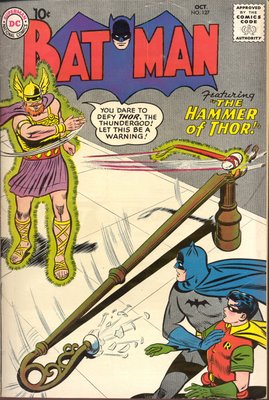 Let's trace the elements of similarity. Hammer flies back to him automatically? Check. Refers to his opponents as "mortals"? Check. Winged helmet? Check. 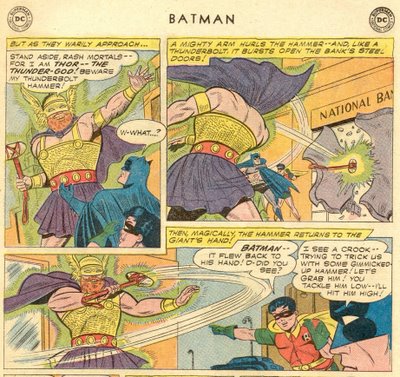 Secretly a meek, unassuming man? Changes back into Thor when he touches the hammer? Check, check. 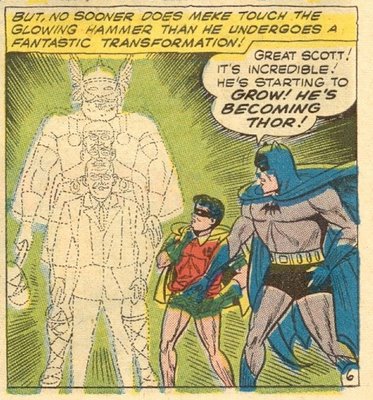 Obviously there are dissimilarities as well; this Thor has red hair and a beard, and the man who changes into him has no memory of his Thor persona when he changes back. But overall, it's pretty obvious where Stan got the inspiration for one of his major characters of the Silver Age.
Posted by Pat at 8:34 AM

Um, I'm pretty sure that most of those similarities are due to the fact that they are specific to "Thor" the legend himself, ie: Viking wings, mortal/godhood, even the "returning hammer" thing is lifted straight out of the ancient 'Prose Edda' as it would "never fly so far as not to return to his(Thor's) hand)", and not to Stan or anyone else "copying" another comic's work, consciously or not :D