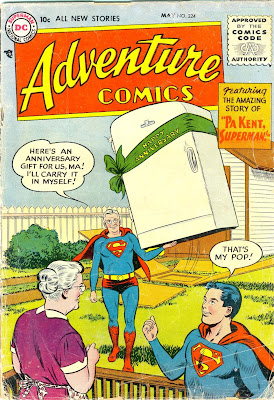 For some reason, these stories appeared to be popular with readers in the Silver Age, because there were several. In this particular tale, Pa Kent doesn't really gain super-powers. He is struck by a bolt of lightning while wearing a Superman outfit that a tailor had designed as a gimmick, and becomes convinced that he is a Man of Steel. The story features one of the more convenient comic cliches of the Silver Age: 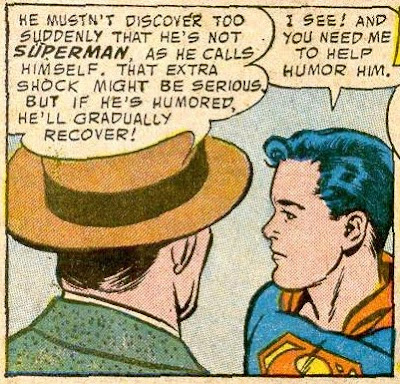 Thus the tale revolves around Superboy helping his dad perform super-feats until he can recover. In the course of the plot, Pa Kent becomes something of a laughingstock of the town. But everybody is surprised when: 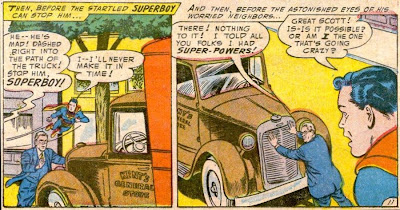 However, it turns out that Pa Kent had eventually realized he wasn't really super-powered and pulled a fast one on the townspeople and his son: 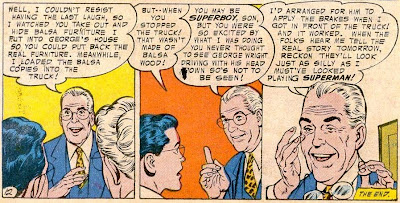 Comments: I particularly like the twist ending to this story; Pa Kent seldom got the last laugh in the Silver Age.

The next example of this type of story came exactly a year later, in Adventure #236: 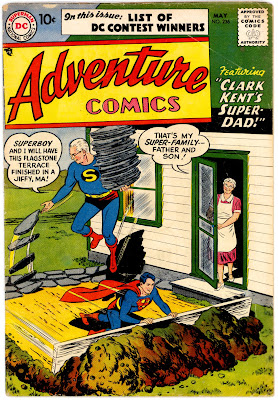 This story starts with Jonathan Kent questioning his usefulness as a parent: 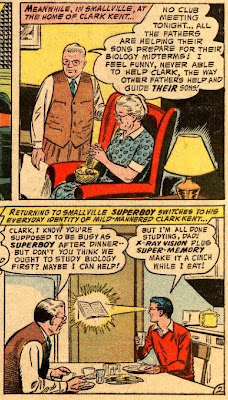 Of course, if he really wanted to help his son, he would have suggested that the lad stop bringing back strange objects from alien worlds, a frequently disastrous practice that Superboy continued as an adult. And so it is with this story, as the Lad of Steel brings back a rod from outer space that has an unexpected effect: 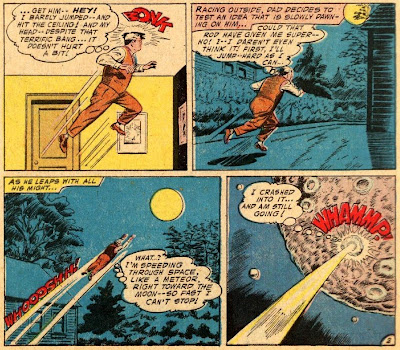 So Pa Kent becomes Strongman, and "helps and guides" Superboy in his patrols of Smallville. Of course, not being used to super-powers he frequently makes mistakes, and indeed is more of a hindrance to his son.

An amusing subplot involves Lana Lang's mother, who becomes Pa Kent's secret identity snoop just as her daughter had been for years to Superboy: 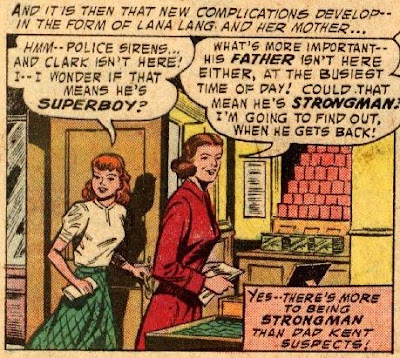 I don't think Lana's mom made many appearances in the Silver Age; I can't recall another story featuring her prominently.

Anyway, Pa Kent soon finds out that super-powers and a secret identity are a mixed blessing, and when his abilities wear out eventually he decides to leave the heroics to his son. There is a touching moment at the end: 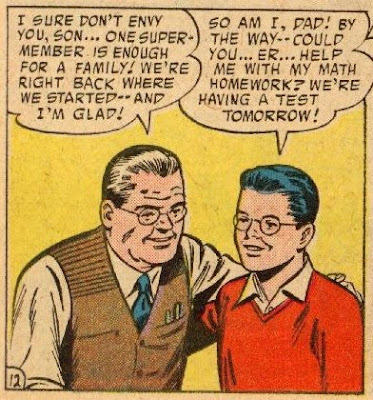 Comments: The sweet ending redeems this tale. The Kents didn't get enough credit in the Silver Age. Sure, Superboy got his super-powers from his Kryptonian parents, but he got his moral upbringing from Jonathan and Martha, and that was easily more important in making him a superhero.

But Super-Dad was far from finished: 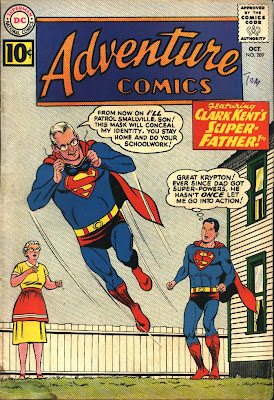 No surprise, it's our old friend the alien object that gives Pa Kent his powers: 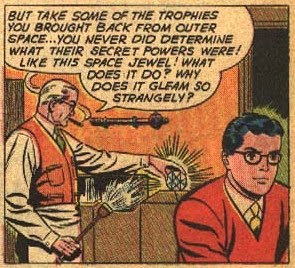 This time Jonathan has no intentions of allowing his son to even share the glory: 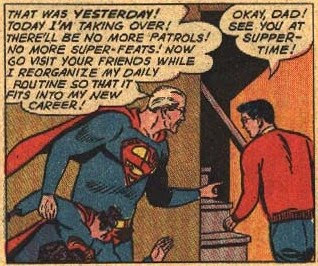 And indeed it seems like Pa has been jealous of his son's abilities all along. But then Superboy discovers the truth when his "dad" meets one of his robots: 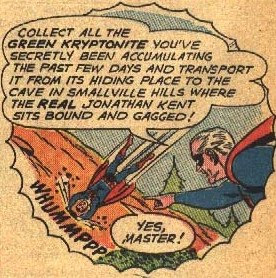 It turns out that the Super-Dad in this case is actually Jax-Ur, an escaped Phantom Zone prisoner, making his first, but by no means last, appearance in the Silver Age.

I suspect that there were more Super-Dad appearances in the Silver Age, but those are the three I know. I don't know of any cases where Martha Kent became Super-Mom. Anybody?
Posted by Pat at 3:01 PM

Aaron said...
This comment has been removed by the author.
5:45 AM

It really is weird to see Lana's mom, it seems like she was usually one of those invisible moms like Veronica Lodge or Li'l Jinx had - they would appear occasionally, but it was weird when they did. Fun fun stuff. Pa Kent really is the unsung hero of the Superman saga.

"The Kents didn't get enough credit in the Silver Age. Sure, Superboy got his super-powers from his Kryptonian parents, but he got his moral upbringing from Jonathan and Martha, and that was easily more important in making him a superhero."


I couldn't agree more heartily, Pat, and I'm glad to see you mention it.

Even if one filters out the sillier Superbaby tales of the Silver Age, it staggers to think of the trials and tribulations of a middle-aged couple trying to raise a super-powered toddler and prepare him for a career of service to mankind. They didn't know where he came from, other than from "out there". They didn't know what might hurt him or how his alien physiology would be different from ours. For that matter, they would have had to consider the possibility that little Clark's real parents might come looking for him someday, arriving from outer space.

There was no way to control their super-youngster, except to rely on his conscience and on his love for his foster-parents to make him submit to their direction. They had to train him to restrain his natural youthful exuberance and hold his super-powers in check; and cover up for him, when he didn't.

And, in the middle of the night, when young Clark's dreams and nightmares would take him back to a world which he could barely remember, it was the Kents who comforted him and eased those unknown fears and feelings of loss.

Most important, the Kents gave Clark a moral compass. They instilled in him compassion, a belief in decency and fairness, and a sense of duty to humanity. If Clark Kent had been a normal Earth boy, he would have turned out remarkably. But with an immensely super-powered son, the Kents' lessons literally directed the course of the world.

I've said this before: Superman was the most powerful being on the planet, a man who could have had anything he wanted by simply taking it. He could have lied, cheated, or swindled without detection.

But he didn't do any of this. And in such restraint, he demonstrated to the population of Earth-One---and to the readers---that such things as honesty and a moral code were even stronger than an abundance of super-powers. That is the lesson of Superman.

And it was taught to him by Jonathan and Martha Kent, "two fine people, who gave a loving home to an orphan from space."