Adventure #244 (Jan 1958) is not a famous issue, but it does have some historical significance. One of the backup features in Adventure at the time was Green Arrow, and the story in that issue was “A Medal for Roy”. It’s kind of a puzzle story; how can Green Arrow and Speedy overcome an obstacle?

Speedy is chased by some crooks into Oliver Queen’s apartment. Quickly changing into Roy Harper, he diverts and then subdues them. Because he had “rescued” Speedy from those crooks, the President (Eisenhower at the time) wanted to bestow a medal on him. Unfortunately Roy also has to be present as Speedy at the same time for a police lineup. How can he possibly skip either event?

In the end, Speedy hits on an ingenious solution. He tells the President of the United States about his predicament and the President’s grandson (David) agrees to impersonate Speedy while Roy accepts the award. Roy explains it to Ollie here: 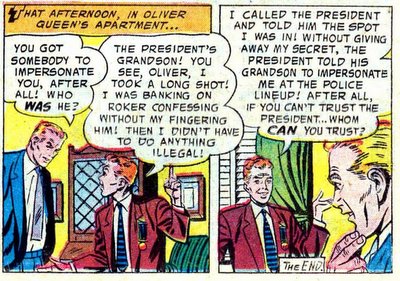 Cute little idea for a story, and six years later DC decided to dust off the plot for another story, with disastrous results.

Setting: Action #309, February 1964. Superman is faced with the same dilemma as Roy Harper was; he must appear as both Supes and Clark at the same time. His robots are kayoed by solar flares, Batman has to appear himself at the function. So, after casting about for a solution, he comes up with the answer: 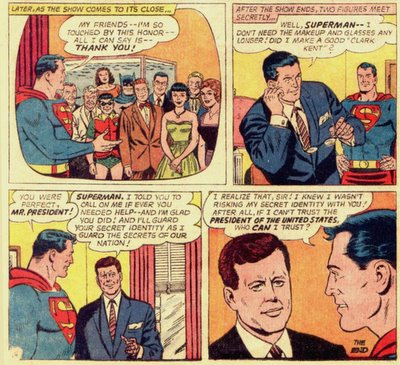 But there was one horrific problem for DC: the comic came out a little over a month after the assassination of President Kennedy. Of course, it had been written and drawn and sent to the printer well before the events of November 22, 1963, but inevitably DC took some flack: 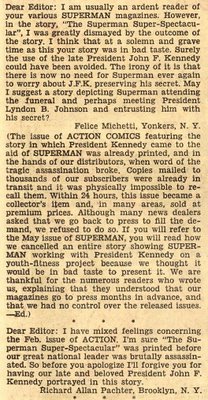 Incidentally, the story that was canceled was later uncancelled and printed as a tribute to JFK in Superman #170: 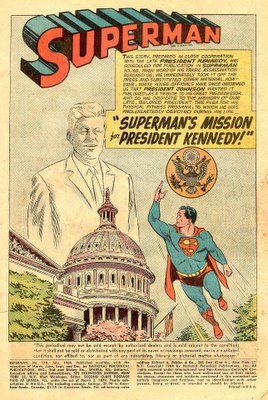 Update: Note that Roy gets it grammatically correct, while Superman errs; it's "Whom can you trust?" As an aside to make this story even a little more bizarre, back around 1970 my parents went down to Mexico for a business trip. When they returned they brought us kids small gifts; mine were two Mexican comic books. One was labeled SuperComic, and apparently consisted of reprints of older DC comics. As it happened, this particular issue reprinted Action #309, which gave me quite a start, as they had not redrawn the face of the president. I couldn't help but ponder the thought of Mexican kids coming to those last few panels, seven years after the events in Dallas and what they must have thought. Caramba!
Posted by Pat at 2:14 PM