Ahab and the White Submarine

DC typically did not launch new comic books without some sort of trial run first in Showcase or Brave & Bold. But in May 1964, DC broke with that tradition for Captain Storm, allowing him to debut in his own book. Captain Bill Storm skippered a PT boat in the South Pacific during World War II. During a battle with a Japanese sub, his boat was cut in two and he lost his left leg below the knee. The enemy sub commander guns down all of his crew, then leaves Captain Storm alive.

He is determined to return to active duty, but his commanding officer is skeptical he can handle the job with a wooden leg. With the help of a no-nonsense nurse, Storm begins his rehabilitation, eventually proving to his superiors that he is worthy of another command.

Now it is the men under him who question his ability. He's already lost one crew; will his second tour be another disaster? This suspicion is highlighted in the first issue in the men being unwilling to call him "Skipper"; it's always "Sir" or "Lieutenant".

Eventually he proves his worth by showing his ability to use his wits, and his fearless fighting when wits won't get the job done.

There are some obvious parallels with Captain Storm and the real world at the time. First, obviously, the incident with the ship cut in half by an enemy vessel is inspired by PT-109 with Storm as John F. Kennedy. In addition, there were many popular movies and TV shows with World War II themes at the time, including McHale's Navy, which also featured a PT boat captain.

The comic itself makes reference to Ahab and Moby Dick; of course the equivalent for Captain Storm is the Japanese submarine which killed his first crew. In issue #1, it appears that PT-47 has destroyed that sub, but this appears to have been conveniently forgotten in later issues to keep Storm's revenge motive alive.

Also apparently forgotten was the name of the nurse who helped Storm get back on his feet again. In #1: 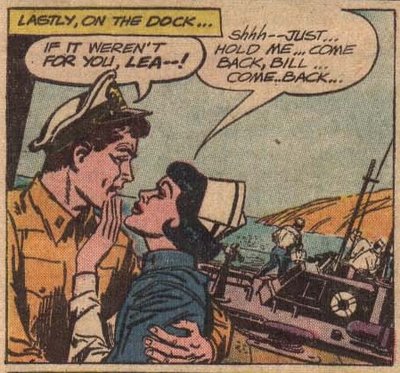 But in the second issue: 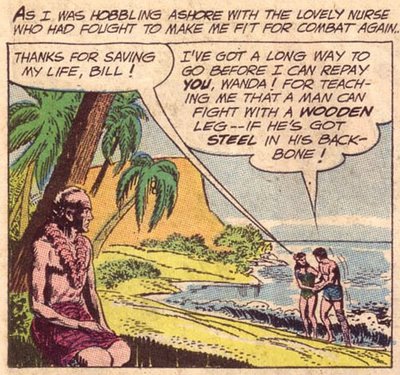