The Bizarros, Part I

The first Bizarro appeared in Superboy #68, October 1958. Superboy is on hand to watch Professor Dalton try out his new duplicator ray. Unfortunate, the duplication process is imperfect; when Dalton tries to duplicate radium the resulting material does not have any radiation. As Superboy leaves, Dalton accidentally trips on the machine, beaming it on Superboy. It creates an inexact duplicate of the Lad of Steel. 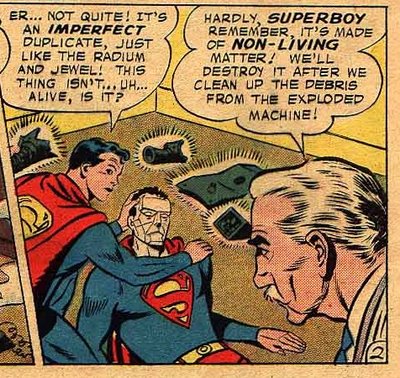 At first they assume the creature is dead, but then it gets up and starts moving around. Frightened by his own appearance in a storefront window, Bizarro throws a car through it, convincing everybody that he's a menace. 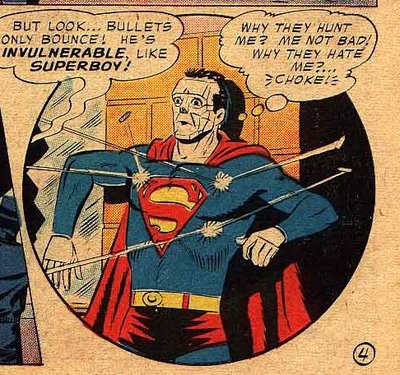 At this point the story becomes something of a cross between Frankenstein the book and Frankenstein the movie. Bizarro finds a friend, but it's only because the girl is blind. Eventually Superboy realizes that the glowing fragments of the machine that created Bizarro would have the same effect on the creature that Kryptonite does on him. Since Bizarro isn't really alive, it's not the same thing as killing him. In the end, Bizarro charges at Superboy and is destroyed in a sudden explosion, that conveniently restores the eyesight of the young girl who befriended him.

Some points: Is this the first "three-part book-length novel" in a Superman title? Although Bizarro died in this issue, Lex Luthor created another Bizarro in a two-part story in Action Comics the next year and the Bizarros (since there were soon lots more of them) created their own wacky world, which was the subject of a series of stories in Adventure Comics immediately prior to the Legion of Superheroes.
Posted by Pat at 7:32 PM