Mark Engblom did a terrific series back in 2008 on Superman's Fortress of Solitude, concluding with a look at 12 different Fortresses he'd had (in comics and in film), including two that didn't belong to Superman. One belonged to Bizarro, and the other to Krypto. I found a few months later that Supergirl briefly had her own Fortress, but she destroyed it after it was accidentally discovered by an unscrupulous archaeologist.

Here are two more that I've come across recently. Superboy's "Secret Cache 3" is somewhat similar to the Outer Space Fortress over there, but note that that's described as being disguised as a meteor, while this is inside a crater on a barren world: 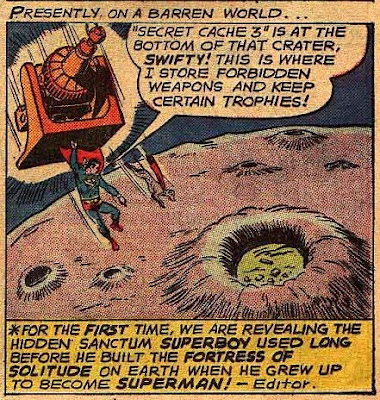 In World's Finest #156, Bizarro visits Earth and creates the Fortress of Crowds as an answer to Superman: 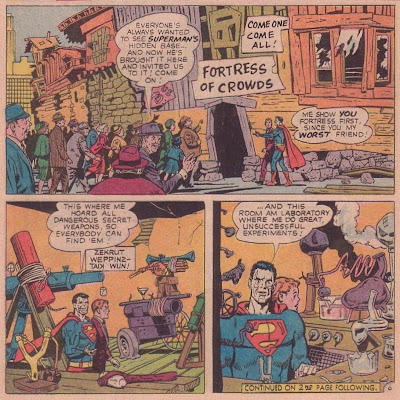 Update: I should have given Blog Into Mystery a hat-tip on the Secret Cache 3 part of the post; while reading his blog, I noticed a post about the cover to Superboy #109 which encouraged me to read the issue.
Posted by Pat at 6:58 AM

I'd like to toss two more Fortresses into the collection.

Since Mark Engblom "went across the hallway" to the movies, I feel a mention should be made of the Fortress in the Dini-Timm animated Superman. I rather liked how it grew in the background without any overt mention in a plot. Buried in the Arctic ice and accessible only if one can survive immersion in hyper-chilled water. I always thought this an elegant and effective placement. No golden arrows or other obvious access points.

It came into existence primarily to house the alien zoo of the sinister Preserver. Each time we visited the place, it had more development. A visiting Dr. Emil Hamilton coined the name "Fortress of Solitude", which quite flummoxed Superman. One of the Fortress' last appearances (in the JLU series) featured everything, from a "Hall of Weapons" to giant statues of Jor-El and Lara.

The second Fortress I can offer is that of "Superman of 2965" and his orbiting, invisible sanctuary. Considering how our 21st century orbital paths are getting crowded, one can only surmise how heavily trafficked near-Earth space is in that 30th century. An invisible fortress would be like Bizarro's "Fortress of Crowds", only a navigation hazard as well!

I'm wondering what constitutes the key icons of the Fortress. The Batcave has the Penny, the Dinosaur and sometimes the Joker Head. Also, it should be a stalactite-filled cave with some bats. A Batmobile in the background somewhere.

In the Fortress? It always lacked a layout, always featuring rooms wherever and whatever. But, I'd suggest the statues of Jor-El and Lara with Krypton are reasonably iconic. Kandor on a table somewhere. What else?

I was thinking the same as the second thought. Who's Swifty?

Swifty's another super-pooch - I had a post on my blog featuring one of his Superboy covers a few days ago. And I'm digging the Fortress of Crowds - it's stupid, but it makes such perfect sense in Bizarro logic. Love the "great, unsuccessful experiments" line.

Yep, Swifty's another dog from Smallville who occasionally got super-powers, riling Krypto greatly.