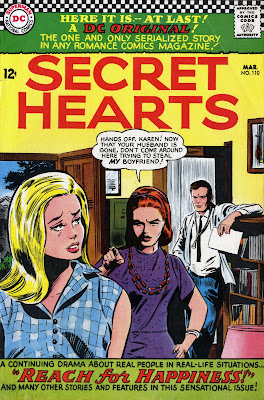 In March 1966, DC started a serialized story in their Secret Hearts romance comic. The story is set in Danville Corners, a small town somewhere in the US, with plenty of intertwined lives and romances. We initially see the town through the eyes of Karen Wilder, who is returning after a tragic end to a two-year marriage to a Hollywood movie star: 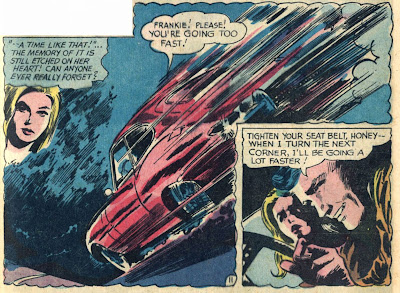 As you can probably guess, the curve was "deadman's curve" and Frankie bought the farm.

We get occasional glimpses in that first episode of how complicated the various relationships are. Karen's sister, Peggy, is bitter over something to do with their mother. A friendly older couple (Lila and Roger), blame Lila's rich but irresponsible father for their son's youthful wildness. Karen had formerly been engaged to the young local doctor (Greg Marsh), but now he's involved with Rita, who'd previously been engaged to Ray Silva, a ne'er-do-well nightclub operator.

The story ran for an amazing 29 issues. When you consider that each installment was probably 15 pages or so, the story becomes easily DC's longest in the 1960s. The earliest issues were illustrated by Gene Colan, so the art is definitely a treat. And the characters are complex. For example, Rita comes off as a bitch in the first issue: 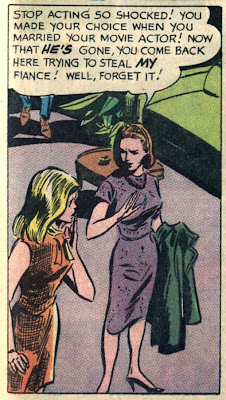 But in the second issue we get a deeper feel for her character: 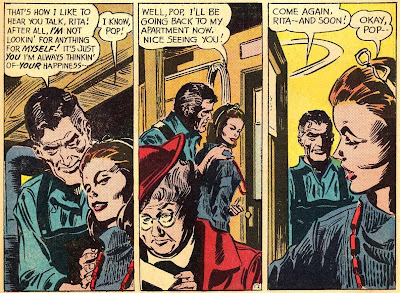 She grew up on "the wrong side of the tracks" and so she's always felt inferior. She may not be a "good" girl, but she's not a cardboard cutout villainess, either.

Over the course of the first five issues (the only ones I've been able to read so far) we see just how interconnected everybody is in the story. Ray Silva owes his success to Lila's wealthy father, who does indeed seem to be spoiling his grandson. Rita's success is as a singer, and it only came about because Ray gave her a chance to sing at his club. As the five issues come to a close, Rita demands that Greg marry her or lose her forever, and he makes his decision: 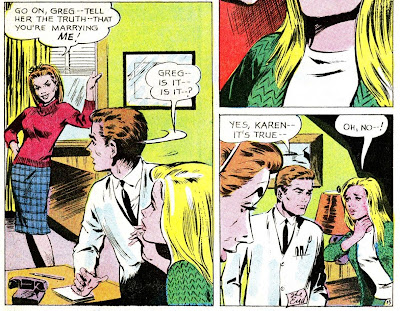 Comments: Excellent opening to this series, with complex characters and terrific art (although Colan apparently left for Marvel by Secret Hearts #114, as he did only the cover and splash for that issue). Yes, the story follows all the soap opera tropes, with tears coming more often than kisses. But that's the nature of the genre, and I heartily recommend the early issues of this series as worth the read.
Posted by Pat at 5:29 PM

Wow, Colan romance art. God, is he good. Never seen it before--it's absolutely terrific. Many thanks for postng it!

The first issue I have of the "Reach for Happiness" series is one of the later issues, #128 -- so it is great to see interiors from the first one! I am going to link up to this on Sequential Crush!

Anonymous, I agree. One thing I should have mentioned is his obvious love for cars; in the first few issues we see two Rolls Royces, a Jaguar, and Frankie's car looks like a Porsche to me.

Jacque, email me if you'd like to see scans of those five issues.

Anonymous said...
This comment has been removed by a blog administrator.
5:40 AM

Hey Pat! I gave you an award. Congrats!