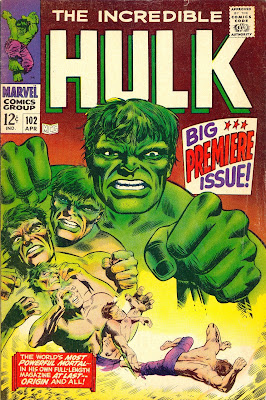 Rather than go into detail about the plots of these issues, I'd prefer to take a broad-brush approach. Hulk #102 was the first issue of the Hulk's own title, following the splitting of Tales to Astonish into separate mags for Greenskin and the Sub-Mariner. As you can see from the cover, it contains a retelling of the Hulk's origin, rather oddly and in rhyme by an Asgard Oracle: 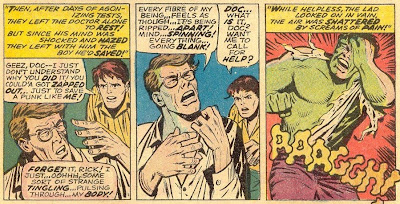 In that first issue, the Hulk helps defeat an invasion of Asgard by forces led by the Enchantress and the Executioner, then is returned to Earth by Odin. In #103, he faces the Space Parasite (which seems pretty much like a knock-off of the Parasite, a Superman villain of a year or so earlier). He's a former king of an alien world who subjected himself to an experimental treatment in order to defeat an invasion force, but who found himself transformed into a being that needs constant battle in order to stay alive. Needless to say, the Hulk provides plenty of that; indeed, the Space Parasite is defeated.

In #104, some crooks bring back the Rhino, an old Spiderman villain. Like all super-criminals, he is new and improved: 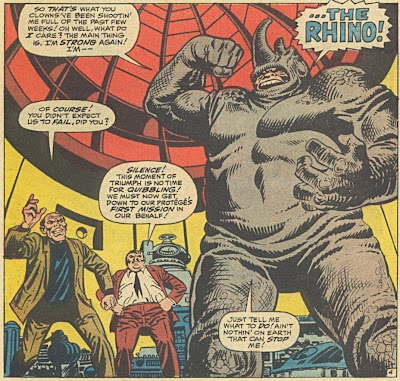 His assignment is to kidnap Bruce Banner, who is currently being held by the authorities and subdued by drugs to prevent him transforming into the Hulk. But of course the process of kidnapping him elevates his blood pressure and he battles the Rhino, apparently killing the villain (hah!).

In #105 and #106, the Hulk fights the Missing Link, a caveman who had come to light in Red China following a nuclear explosion. At the end of #105, Rick Jones, using a ray gun constructed by Reed Richards from plans created by Bruce Banner, turns the Hulk back into BB, just as the Missing Link is getting free of a bunch of debris that the Hulkster had dumped on him. Is this the end?

Well, no, it's just a cliffhanger, for when the Missing Link attacks Banner in the next issue, he turns back into the Green Giant. Meanwhile, a Russian counterpart to Nick Fury named Alexi Brevlov kidnaps the two behemoths onto his flying ship (which looks very much like SHIELD's helicarrier). But as he tries to transport them back to the USSR, they break free. The Missing Link dies and Brevlov is ordered to kill the Hulk (although he does not want to do so, as the Hulk had saved him in the crash of the flying ship).

In the final issue of this run, the Hulk finds himself transported to a remote section of Communist China. The Mandarin wants to control him; you can imagine how that works out.

The series sees several changes in the creative team during this run. The first few issues are scripted by Gary Friedrich, then Bill Everett and Roy Thomas for one issue, then Archie Goodwin and Roy, then back to Gary Friedrich. Initially it's Marie Severin on the pencils with Tuska inks. Then in #106, Herb Trimpe's long association with the Hulk begins. He's inked in that first issue by Tuska, but that pairing didn't seem to be working well: 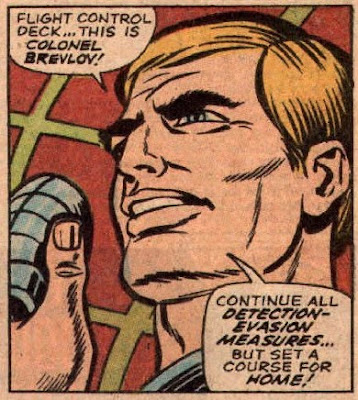 A little too cartoon-like for Marvel, I'd say. The following issue featured Syd Shores on inks, a much better combination, although that didn't last either, as Johnny Severin took over with #108.

Friedrich's scripts emphasized that the Hulk was a man of peace, hounded by society until he lashed out: 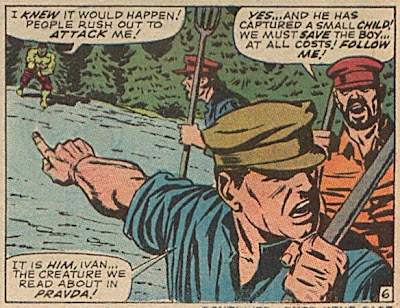 It seems a bit of a stretch but then peace was a big part of the zeitgeist of 1968, when these issues appeared.
Posted by Pat at 4:17 PM

My favorite issue of The Incredible Hulk is #104 where he battles the Rhino. I loved that part when the Hulk, in a rare show of mercy, decides to spare the Rhino, but the Rhino's sense of pride and pure toughness won't allow him to quit, even though he knows he's doomed. Man, what a comic!

I didn't know Rhino appeared much in Hulk's comics. That's a great matchup between those two.