Commander Benson has a post up on the "New" Metal Men, the era in the late 1960s where the MM became more of a secret agent group than a collection of robots with amazing powers. As CB notes, DC made an oddball decision to change what had been a pretty successful series, and to eliminate the basic premise for the series.

This development, and the notion of giving the Metal Men human appearances, destroyed the most inviting aspect of the series. One of its strengths had always been that, in action, the Metal Men provided remarkable visuals for the reader---Gold stretching into lengths of micrometre-thin wire; Mercury turning into globs of fluid; Iron and Lead changing into massive walls or constructions. Even at repose, they had been striking in terms of colour---gold, red, blue, grey, silver, white.

Indeed. Although I covered the initial Metal Men Showcase tryout issue earlier, I thought it might be interesting to take a longer look at the team.

As mentioned in CB's post, one of the interesting facets of the Metal Men was the way the stories contained a relatively painless introduction to chemistry. It was a rare issue that didn't contain something like this: 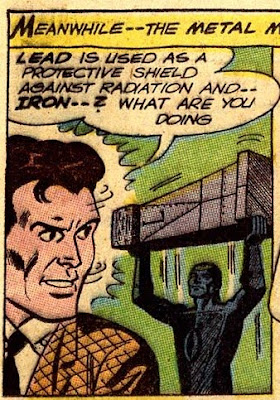 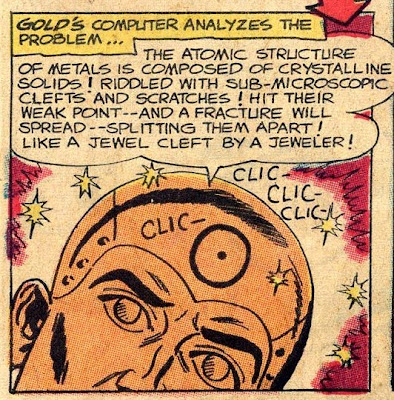 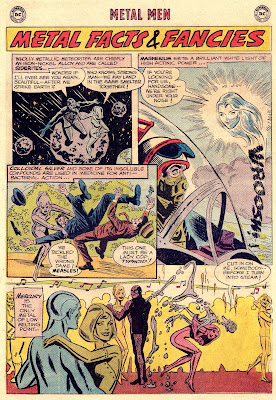 Another interesting thing about the series was that the robots were all given different personalities. This was blamed on Doc Magnus' (the creator) "faulty responsometers". Mercury was a hot-tempered martinet, while Gold was noble and intelligent. Lead and Iron were lunkhead strongmen. Tin was perhaps the most interesting character, with his oddball combination of timidity and courage, as I discussed years ago. The final member of the initial team was Tina, a platinum beauty who was madly in love with her inventor:

I classify the series as "superhero" in nature, mainly because the robots do things that shouldn't ordinarily be possible. For example, while we accept that platinum could be stretched out into an extremely fine wire, is it reasonable that a platinum robot could do so? There are presumably gears and pulleys inside that would be damaged, right? In addition, Iron and Lead are often shown making themselves much bigger than normal; how exactly do they add that mass to their forms?

As mentioned above the series was pretty successful. Here are the circulation figures for 1964: 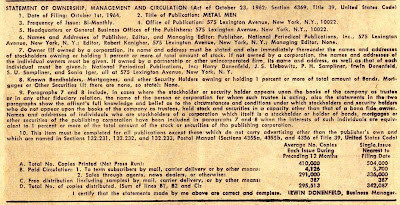 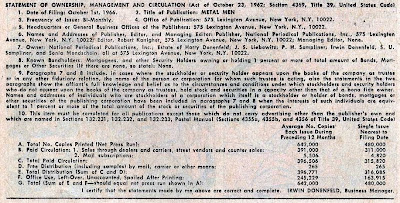 Metal Men was moving 396,000 copies an issue! But in the next two years, sales just plain collapsed, probably due to Batmania and the superhero craze that accompanied it. Sales were down to 240,000 per issue in 1967 and 207,000 in 1968, putting the series dangerously close to the 200,000 mark where DC in that era typically cancelled titles.

I agree with CB that the change was a mistake. The problem with dramatic shakeups is that they are almost certain to annoy a large percentage of your existing audience, with no guarantee that it will capture new readers.
Posted by Pat at 1:45 PM

Well, to be the Devil's Advocate here, if sales declined that sharply, of course the decision makers are going to try something different. DC did that with several of their comics in that period, combining Atom and Hawkman's books, for instance, or the whole Diana Prince: Wonder Woman era.

Sure, it was a mistake in hindsight, but hindsight is 20/20 as we all know.

Hasn't some genius ret-conned it so the "responsometers" actually contain the "souls" of human scientists killed in a lab experiment? And didn't Jurgens or someone turn Doc Magnus into a robot, too? This seems to be one of those strips DC never tires of screwing up.

My 8-year-old is a huge (vintage) comic fan and science nerd whose copy of "Showcase Presents Adam Strange" has probably been read 50 times already. I'm thinking the Metal Men volume might appeal to his sensibilities, but I'm wondering if the lack of color would destroy the whole strip. Any thoughts?

Johnny, I understand where you're coming from, but I still think those kinds of radical changes were doomed to failure, especially since DC stuck with none of them for very long. And I do think that in the case of the Metal Men, their problem was not internal; they just lost sales (like most DC titles) to Batman.

Dave, none of that would surprise me. I do know that Doc was turned into a robot for a couple of issues in the main series. Tina thought that at last they'd be compatible, but in a rather humorous bit, Doc's responsometer worked the way it should and he was coldly unemotional.

Not sure how the series would work in black and white. The characters are generally distinctive enough looking, especially the three featured ones (Tin, Tina and Mercury).

It would also depend on whether he goes for a more whimsical series. Adam Strange is pretty straightforward, while MM definitely has some goofy moments. I do remember that there was an Atomic Knights trade back in the 1980s that would probably be right up your kid's alley.

The complete run of Atomic Knights was collected again recently in a rather lovely, not too expensive hard cover.

While I can understand people not caring for the experimental new directions, I tend to like them. I enjoy seeing the old guard creators striving for something a little more modern. Mind you, not even I can pour anything but scorn on the New Blackhawk Era -- Error, more like!

Metal Men was one of my favorite comics when I was a kid and I can say definitively that I stopped buying it when they changed the comic. I also stopped buying Wonder Woman when they changed her to a spy. Now that I think about it one of the things these changes had in common was art by Mike Sekowsky. I know a lot of people like him, but other than his work on JLA I never found him appealing.

Both WW and MM's new direction were also written by Sekowsky. Why? No idea.
I have the B&W to fill out gaps in my set and it works pretty well. The art is still cool and rereading them all, it's obvious Doc had more feelings for Tina than he acknowledged.
I don't think the MM had any gears or parts, they were solid metal controlled and moved by the responsometer.
The idea they were really human got dismissed in 52 (I think) as a weird hallucination of Doc's