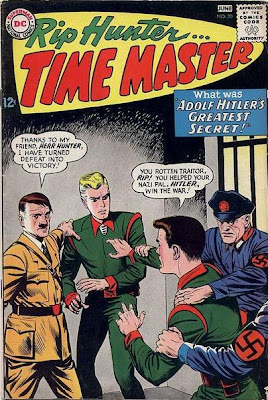 As I have discussed in the past, time travel was a frequent topic in the Silver Age. Almost all of DC's superheroes had some method or another of going backward or forward in time, whether it was the Flash with his cosmic treadmill or the Atom with his time pool. But Rip Hunter was solely a time traveler; that was his entire schtick.

It should have been enough; time travel is an inherently fascinating concept, and the ability to travel to famed historical events would seem to offer endless possibilities for stories. But DC was in the middle of its gorillas and monsters and dinosaurs phase and thus the actual historical content of most issues was somewhat lacking.

Fortunately this was one of the issues that concerned itself with real-life monsters, in the form of Adolf Hitler and his Third Reich. Rip and his pals, Jeff, Bonnie and Corky are filming action on the Eastern front of World War II when they are shot down (Rip's time machine was able to fly as well). The machine is recognized by the Nazis, and Rip explains: 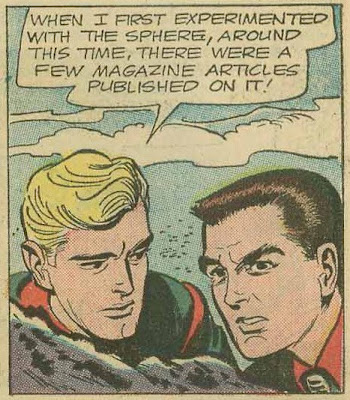 Now of course that doesn't make a whole lot of sense. Rip appears to be late-20s, early 30s at most, and so unless he was inventing his time machine in grade school it seems unlikely that 20 years earlier (the comic was published in 1964) he was being featured in news magazines during WWII.

At any rate, Rip is brought to meet Hitler: 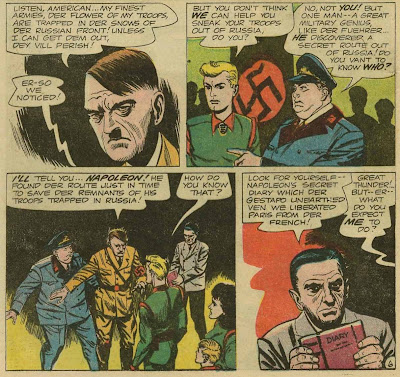 Rip is assigned the task of bringing Napoleon back from the 1800s so the Nazis can learn his secret escape route from Russia. To ensure he returns, Hitler orders Jeff held as a hostage.

Comments: Excellent premise for a story, putting incredible pressure on Rip. If he succeeds, Hitler manages to get his crack troops out of Russia, meaning they will be available to repel the D-Day invasion later that year. And if he fails, Jeff gets the firing squad.

Part II brings us back to July 14, 1815. Unfortunately, the history starts to go a little off the rails in this section. This was after Napoleon's defeat at Waterloo. The story emphasizes that the Prussians (i.e., Germans) are in command, which is reasonably true, but only as part of a coalition force that included the English. Indeed, there's this comical scene: 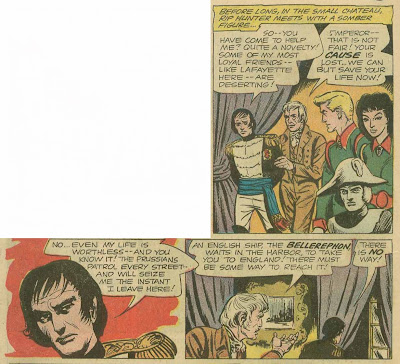 Lafayette wasn't a particularly good friend of Napoleon's, and while Napoleon did surrender aboard the Bellerephon the next day, it wasn't as if he was "escaping". What's going on here?

I suspect that the writer and editor decided that explaining to the readers that the Germans and English had been allies against the French back then was too complicated, so they make it appear as if Napoleon was a good guy. After all, his old buddy is Lafayette, a hero of the American Revolution.

The Prussians are closing in, but Rip manages to decoy them while Corky makes last-minute repairs to the time machine. Rip asks one favor of Napoleon before escorting him to the Bellerephon, and thus the historic meeting takes place:

Rip then takes Napoleon to the Eastern Front, where the Germans are desperate to escape. Napoleon shows the secret exit, through a mountain pass, and the Germans take it. But: 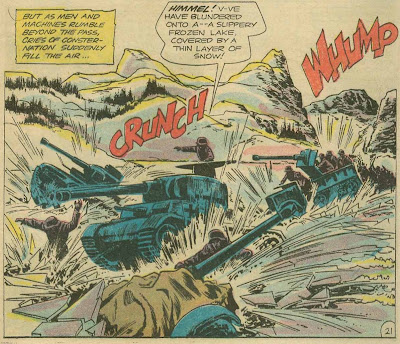 The German general sends a radio message to Hitler advising him of Rip's betrayal. Can he get back in time to prevent the Nazi from killing Jeff? 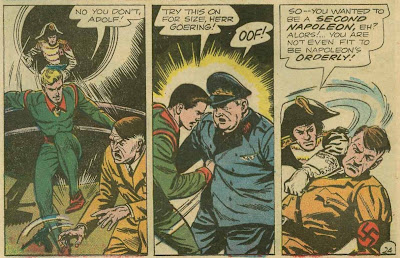 Comments: A very entertaining story overall. I enjoyed the artwork more as I read on, but Bill Ely (credited at GCD) did not do a very good job on the faces. Everybody has that mannequin look as you can see in the panel where Hitler meets Napoleon.

One very oddball feature about the comic is that each chapter ends with a house ad for the very next issue of Rip Hunter. Here they are: 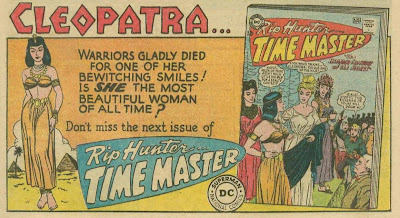 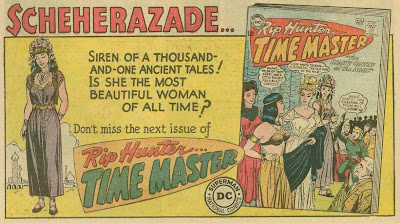 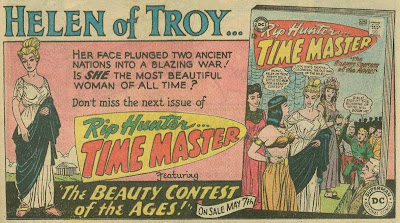 It's an interesting teaser.

An aside: Don Markstein notes that the Rip Hunter "team" was comprised of four people: Smart guy, strong guy, woman, kid, which was the template for another fantastic foursome that debuted two years after Rip Hunter's first appearance.
Posted by Pat at 6:49 AM