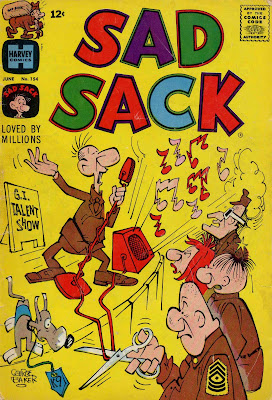 Sad Sack was a long-running comic character. Originally a cartoon strip put together during World War II by George Baker for an army weekly, the series was popular enough to get its own comic book starting in 1949. It lasted through to the 1990s.

The Sack (as he was referred to) was an unlikely candidate for stardom. He was a lowly private in the army who had zero success at anything he did. Almost every story ended with Sad Sack getting the short end of the stick.

And yet kids of all ages loved the comic. During the 1950s and 1960s the series kept expanding, adding titles like Sad Sack and the Sarge (155 issues), Sad Sack's Funny Friends (75 issues), Sad Sack Laugh Special (93 issues), Sad Sack Army Life Parade (61 issues). There was even a Little Sad Sack (19 issues). Indeed, it is obvious that Sad Sack was Harvey's biggest hit before Richie Rich.

Why the appeal? Well, for starters, army life was a rich source of comic material, as other cartoonists like Bill Mauldin and Mort Walker had already discovered. Sad Sack had a rich supporting cast, including the Sarge, General Rockjaw, Sadie Sack and Muttsy. And third, reading Sad Sack didn't require much reading. 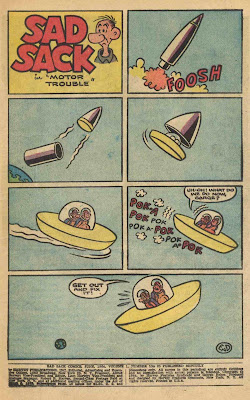 Although it says "The End" in the final panel, the story actually continues. Sad Sack has trouble controlling his jet pack when he gets out to fix the flying saucer and flies straight into the hands of alien robots, who clone him many times over. Meanwhile, thinking that the Sack is dead, the Captain wishes: 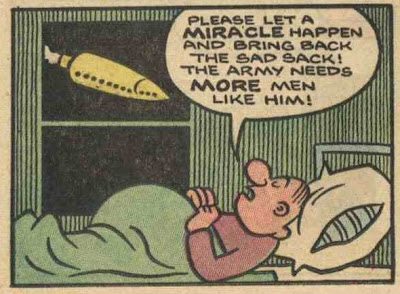 Well, before you know it, the base is overrun with Sad Sacks working for the aliens. And unlike the original, some of them are quite intelligent and start rising through the ranks. And not just in the army:

Meanwhile, the Sarge has discovered the alien robots and is trying to figure out which is the real Sad Sack: 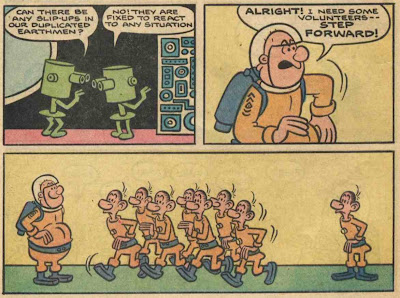 Clever little gag there. When the Sarge and Sack get back to Earth, they discover that the fake Sacks can't take a punch to the stomach, so the men go around punching every Sad Sack they see, much to the annoyance and pain of the real one.

The story continues with one of the alien robots coming to Earth and having Sad Sack show him around. The story turns into a series of gags on how crowded and polluted everything is, including this scene at a nightclub: 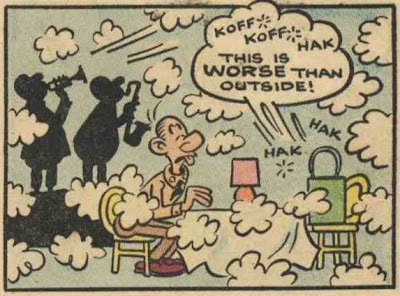 And in the end, the aliens decide not to invade Earth because it's so undesirable.

In the final story, after digging a ditch, Sad Sack is sent to the dry cleaners to pick up Colonel Bagby's suit. There's a tiny tear in the coat, so the tailor has Sad Sack wear it while he sews. But an air raid alert causes him to run outside, where everybody's asking him for orders. Sack says, "Aw, shoot!" and the soldiers treat this as an order. The colonel becomes a hero for brilliantly anticipating the surprise attack, and of course, the Sack goes back to digging ditches.

Comments: The Sad Sack stories are light and pleasant reading. The artwork is simplistic, but consistent.
Posted by Pat at 11:06 AM