So after replacing Schiff as editor of the two titles with Julius Schwartz, DC eliminated almost all of the supporting cast. Robin was allowed to remain, but Batwoman, Bat-Mite, Bat-Girl and Ace were all banished to the dustbin of history, with no goodbyes or explanations. Much like discredited former Soviet leaders, they were airbrushed out of the picture. Alfred got a hero's send-off as he was crushed by a boulder while saving Batman and Robin.

There were several more major changes. First, there were no more aliens or monsters (mostly) or weird transformations. And DC continued to bring back Batman's villains from the Golden Age. In 1963 they brought back the Penguin; in 1965 the Riddler made his first appearance since 1948.

The death of Alfred in Detective #328 resulted in one addition to the Wayne household. Dick Grayson's Aunt Harriet joined the lads, reportedly added by DC in order to quash once and for all the rumors that Batman and Robin were gay (a theory originally proposed by a quack psychiatrist in Seduction of the Innocent, an early 1950s expose on the comics' sometimes seamier side). Although remembered by many comic fans as being inspired by the TV show, Aunt Harriet actually predated the debut of the ABC series. If anything, it was the show that resulted in the return of Alfred, the faithful butler, who was resurrected in Detective #356.
Posted by Pat at 6:47 PM No comments:

I got the notion this weekend to read all the Martian Manhunter stories in Detective, starting with #225, the comic some feel marks the beginning of the Silver Age. J'onn J'onzz, the Manhunter from Mars first appeared there in the story, "The Strange Experiment of Doctor Erdel!"

Doctor Erdel had been fooling with a "robot brain" (i.e., computer) and had somehow plucked a Martian from the Red planet and deposited him on earth. When the Martian demands to be sent back, the doctor explains that his machine is one way only and that it will take him time to make a sending machine. Then Erdel conveniently drops dead of a heart attack to settle matters.

J'onzz, who mercifully converts to human form and calls himself John Jones scopes out the situation on Earth. The next few panels are full of the perhaps excessive and certainly amusing belief in science that was to typify DC comics for the entire Silver Age.

Looking at a skyscraper, Jones observes: "Unlike on Mars, so many of the denizens here live in a small area that they build their structures into the skies." In Paris, he notes the "Arch of Triumph" and denounces it as, "A monument to victory in war. Mars saw its last war a thousand years ago." "Look at their ancient-wheeled vehicles! Hundreds of them, crawling along the same streets where people walk. In another century or two, this will all be changed..." And later comes this bizarre, scientofascistic comment: 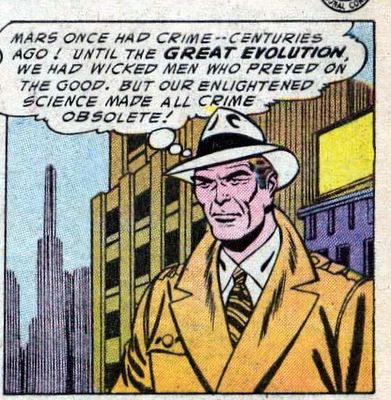 It would be nice to say that future stories developed the Great Evolution concept, but in fact this was the sole mention during the long run (102 issues). And many future stories cast doubt on the notion of crime having been eradicated on Mars.

The writing and coloring were pretty haphazard in the first few stories. Although J'onzz's costume was colored in #225 pretty much standard for the character, with red belt and straps, blue cape and boots and black (not blue as later) trunks. 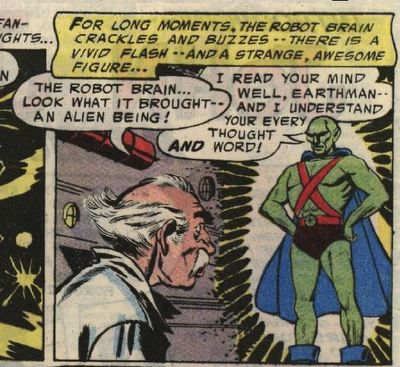 Regardless, the next few issues show some carelessness. In #226 he is shown in the first panel in his costume looking up at Mars in the night sky, wearing a completely green uniform. In #227 his trunks are white (indeed, they look like Fruit of the Loom). Dr Erdel in #225 becomes Dr Urdle in #228. In #232, a dog which saves the Martian Manhunter is introduced. "Jupiter" becomes his pet, and Jones remarks, "We're going to be real pals for a long time." Except that is the last time Jupiter appears. 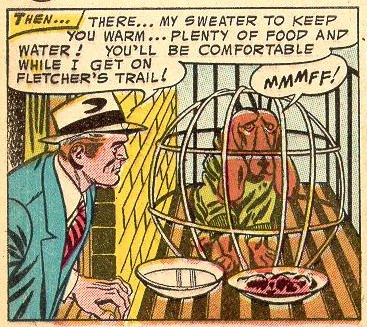 And apparently there was a Minor Devolution following the Great Evolution, for Martian criminals popped up fairly often: in #231, #236, #273 and others.

Early on, the tendency was to expand the MM's powers to meet each new situation (more on this later). He seemed to have a lot of powers involving his eyes: X-Ray Vision, Telescopic Vision, Space Lightning Vision, Microscopic Vision, and even "Martian Angle" (See-Around-The-Corner) Vision, although I don't quite understand why somebody with X-Ray Vision would need that.

The comic was also extremely repetitious. The Martian Manhunter's principal weakness is fire. In almost every story Jones cringes as somebody lights a cigarette, pipe or cigar. I couldn't help thinking that he would have a much easier time of it in today's virtually smoking-free environment. Another area with repetition was in the use of his powers. For some reason, J'onnz like to race people by burrowing through the ground underneath them--he did this in #260, #274, #278 and elsewhere.

To Be Continued!
Posted by Pat at 7:32 AM No comments:

This site is mostly dedicated to the comics published from 1955-1970, although it may stray a bit at times.
Posted by Pat at 6:06 PM No comments:

Email ThisBlogThis!Share to TwitterShare to FacebookShare to Pinterest
Newer Posts Home
Subscribe to: Posts (Atom)
Contact me: pcurley49+6 at gmail dot com (do the arithmetic to get a usable email addy).