I wrote many years ago about the famed Action #309 issue, where Superman divulges his secret identity to President Kennedy so the later can impersonate him (as Clark Kent) at an event where both Supes and Clark are both expected to appear.  Horrifically for DC, the issue appeared on the newsstands a full month after JFK was assassinated, although (obviously) it had been scripted, drawn and sent to the printers before the events in Dallas.

I also noted that DC had another story featuring JFK in the works at the time, which they had pulled from publication, but after urging from his successor Lyndon Johnson, they published in Superman #170, with this note at the end: 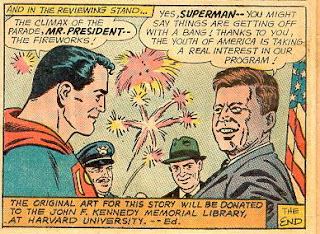 Well, turns out that Al Plastino died on Monday, and there was an additional story:

Controversy arose when the original artwork was found up for auction 50 years later -- not in the library as originally planned. Plastino asked a New York state court to release the name of the person who sent the artwork to auction in an attempt to retrieve the piece and ensure its public display. "I do not want anyone to feel sorry for me. I just want the right thing done here and to be treated fairly," he wrote in a Facebook post to fans. The auction has been removed from the schedule, but the fate of the famous Kennedy comic remains up in the air.


Plastino believed the artwork was supposed to have been donated to the planned Kennedy Library in Boston 50 years ago, the same year Kennedy was assassinated, according to court documents.

Plastino was surprised to learn recently that it was scheduled for auction on Friday in Beverly Hills, California. Heritage Auctions has since pulled the artwork from this week's sale, said Heritage spokesman Noah Fleisher.

Given that original art comic pages commonly go for hundreds of dollars, and that this particular issue would be regarded as particularly historic (especially with the auction coming near the 50th anniversary of Kennedy's assassination), it would certainly appear that Plastino had a legitimate issue (as might the JFK Memorial Library).  However, the current owner has a defense:

"Heritage policy is not to publicly discuss pending litigation," Fleisher said in a prepared statement. "I can tell you, though, that our consignor bought the artwork at a Sotheby's auction and we withdrew the artwork weeks ago as soon as we learned of the dispute and have returned the item to the consignor." (bolding added for emphasis)

Kudos to longtime commenter and emailer M Hamilton for finding this.
Posted by Pat at 1:11 AM 2 comments:

Unforgettable Sights of a Paper World, a blog about comics from Antonio Gatti, an Italian comics blogger (don't worry, it's written in English).  It's interesting to get a foreigner's perspective on the Man of Steel.

Here's a review of the terrific story from Superman #137, featuring Superman's evil duplicate, Super-Menace. I reviewed the same issue many moons ago.