Wheaties Wishes They Had This One Back 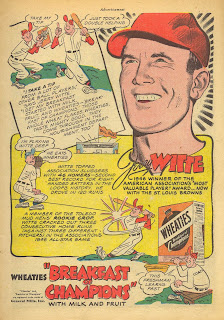 Take a tip from me, Wheaties, and don't fall in love with 30-year-old ballplayers who have a big season in AAA.  I'm a big baseball fan, have been ever since I was 8 years old, and I never heard of Jerry Witte.  Probably because he had only 172 at-bats in the majors (in 1946 and 1947) and batted .163.  While playing first base.  Even on the old Browns, that was not enough to cut it, and one hopes he went into insurance or real estate in Toledo on the basis of his admittedly great season there.

Every now and then some guy will come up and the announcers will be yammering about what a terrific prospect he is, and I look him up and he's like 27 or 28.  No real prospect, just a guy who plugged and plugged and finally made it to the top, but don't expect him to be a star or to stick around long.  If you want to know how long a major-league career to expect, just subtract the guy's age as a rookie from 30 and multiply by two.  Somebody like Witte should have almost no major league career (as he did); guys like Mike Trout and Manny Machado should have very long careers in the majors, as should Bryce Harper (if he stops running into fences).  About the only exceptions to this rule are the former Negro League players like Minnie Minoso, who were banned from the game until they were in their mid-twenties, and pitchers, who can flame out young or suddenly develop a pitch (like Phil Niekro).
Posted by Pat at 6:53 PM No comments:

One of My Favorite Covers

I may have pointed this one out before but I came across it again, and just was awed: 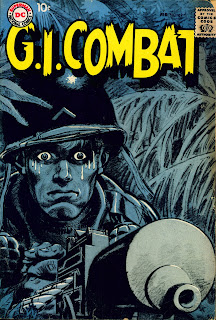 There's a lot there.  From the tropical plants, we can tell it's in the South Pacific, so he's facing the Japanese.  He's hot and he's very nervous, but check out the lips--grimly determined as well.  Jerry Grandinetti, an artist who doesn't get mentioned a lot, put this gem together.