Silver Age Aspects of the Man of Steel

I went to see the Man of Steel movie yesterday.  I enjoyed it a lot, although I will confess that I started out a little suspicious, especially given the build-up during the scenes on Krypton.  I did like the high-tech stuff there, but what the heck was that flying butterfly that Jor-El was dashing around on?  Struck me as a bit of a rip-off from Avatar.

But the rest of the movie was much better; about the only complaints I had with the Earth scenes were that they did a bit too many back and forth in time cuts and the fight sequences lasted way too long, especially that last one, where Metropolis made New York look like it had a picnic on 9-11.

But there were a lot of nods to the comic geeks like me.  For example, Pete Ross.  Now granted, in the books Pete is blond-haired and a popular kid who blows Clark away by liking him, while in the movie he has red hair and is dumpy and dorky and initially a bully.  But still... it's so cool that Pete Ross turns up in a Superman movie that I'll cut them a little slack.

My take on General Zod was pretty much the same; different from the comics but close enough that I'm not going to gripe.  He did try to take over Krypton, albeit with an army of Bizarro Zods:

By the way, in these movies, it always seems that there is one person of hench who almost always has some visible physical flaw--some deformity intended to cue us in that they are really, really evil.  And yet while Zod's main underling was pretty obvious, I didn't catch any flaws in her other than that she was a mean-ass beeyatch.

One cute bit was where Superman learns to fly; I really liked that, because they started him out jumping (in the earliest stories he could jump but not fly), then showed him flying, but having a bit of a problem keeping himself under control.  Remember this story? 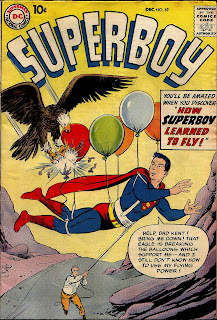 It's one of the tales in the series where Mort Weisinger and his writers started to fill in the legend of Superboy.  BTW, since that cover shows Pa Kent, I will mention that I thought the characterization of Jonathan and Martha Kent was terrific in the movie.  Commander Benson has often mentioned that they were the unsung heroes of DC comics, taking the most powerful being on Earth and molding him into a responsible, heroic young man.  We got some of that in the movie, but more about what a challenge it was to help Clark deal with the way he was different from everybody else, and the urgency of him keeping it a secret.

And yes, I loved the scene at the very end where Lois meets Clark the reporter; that's clearly something of a nod to this: 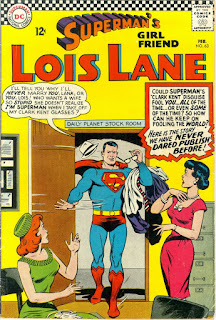 Yes, they pulled pretty much the same gag with Green Lantern and Carol Ferris.

Loved the bits with Jor-El later in the film, after Krypton exploded.  Again, something of a nod and a wink to the Silver Age, where Jor-El appeared almost constantly despite being, well, you know, dead.  I do have to assume it was just some sort of AI computer saying the things its program tells it Jor would be likely to say in those situations.

Steve Lombard gets a bit at the very end; although he did not appear in the Silver Age, I do remember him coming on the scene shortly thereafter.

Did you catch the Lexcorp gas trucks in the final battle?  The story in this Superman movie does an excellent job of setting us up for a Luthor sequel based on the modern interpretation of Luthor as obsessed with Superman precisely because he is an alien.

Yes, I did get a little disappointed at the resolution of the battle with Zod; it doesn't fit the character circa the Silver Age.
Posted by Pat at 12:01 AM 11 comments:

Everything You Always Wanted to Know About Superman

On one tidy page.  Couple of errors there that I have alerted them to in the artists' names.
Posted by Pat at 12:18 PM 6 comments: