May I See Your License, Please?

Licensed comics were pretty common in the Silver Age.  It's not hard to see the appeal to the publishers; you can argue that every episode of the TV show you're covering is an advertisement for the comic as well. As a reader, though, I never particularly liked them. There's a quote from Reading Comics by Douglas Wolk that summarizes rather well the problem:

Comics adaptations of movies are pointless cash-ins at best--movies that don't move with inaccurate drawings of the actors and scenery.

Wolk talks about movies, but the same applies to TV shows, but even more so because we could see that the drawings didn't really capture the characters all that well on a weekly basis.

DC had a lot of licensed properties at the beginning of the Silver Age: 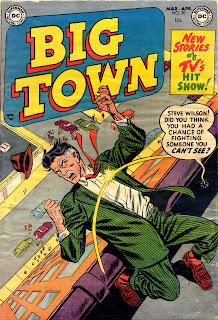 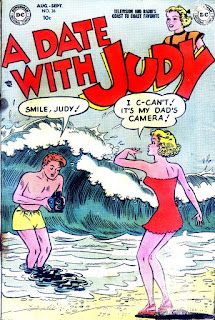 But the negative of comics based on TV shows (in addition to that mentioned above) is that the shows themselves get cancelled eventually, and so the tie-in becomes quite a bit less valuable (unless, of course, the show does well in syndication).  Still, there's always a new show: 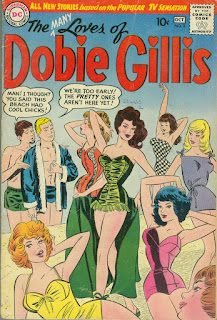 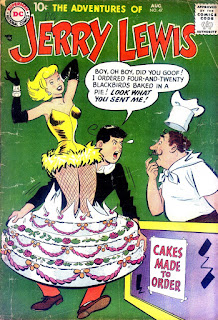 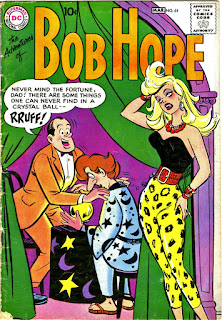 The advantage here is obvious: these guys had much more staying power than your average TV show; Lewis' career in film was over 20 years long and Hope managed to stay atop theater marquees for even longer.

Some other DC licensed titles in the Silver Age included Sgt Bilko, Sgt Bilko's Private Doberman, Mr District Attorney and Jackie Gleason's the Honeymooners.  They even licensed the right to publish a comic based on the first James Bond movie, Dr No: 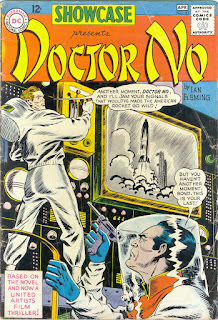 Although oddly the book was actually originally published by Classics Illustrated in England and DC's sales were disappointing, probably because the comic was released several months before the movie hit the big screen in the USA.

For whatever reason, Marvel had almost no licensed properties during the Silver Age; I believe the lone exception is the Conan the Barbarian title which first appeared in 1970.

Of course, the kings of licensed properties in the Silver Age were Dell and Gold Key.  The Four-Color line of comics, which I talked about awhile ago, consisted almost entirely of TV, movie and animation show tryouts.  Here are the covers to fifteen issues of Four Color from late 1961 to early 1962: 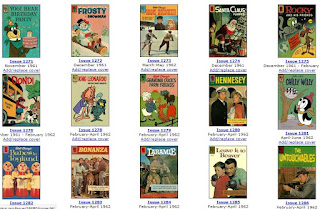 Dell and Gold Key had a very long and profitable relationship with Walt Disney.  Western Publishing licensed the Disney properties for comics and other publication, put together the comics, and then had Dell distribute them until 1962, when the two companies had a falling-out.  Dell published hundreds of Disney comics during the 1940s and 1950s, including the famed Donald Duck series, which is one of the few examples of a licensed character being more successful and popular in the comics than he had been in his original medium.

After the split with Dell, Western published its own comics under the Gold Key imprint and continued its practice of licensing TV and movie properties, as well as developing a few of its own characters, like the excellent Magnus, Robot Fighter series I have covered extensively in the past.  Some of the licensed projects have been pretty good; I covered Gold Key's adaptation of Secret Agent three years ago.  On the other hand, there's this: 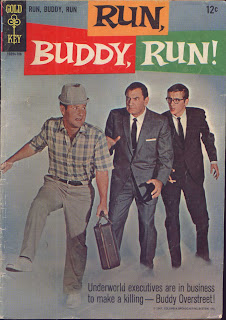 Run, Buddy, Run was a short-lived comedy about a guy on the run from the mob.

It is well-known that when Jack Kirby came over to DC in the early 1970s and started working on Jimmy Olsen as well as other titles, that Superman and Jimmy Olsen's faces were redrawn by DC staff artists like Al Plastino and Murphy Anderson. But it appears that this practice actually started at Marvel.

I've already talked about the bizarre one-off Amazing Spiderman story that appeared in Marvel Super-Heroes #14. At least according to a note Stan appended to that story, Johnny Romita was ill and so Ross Andru was pressed into service to fill in for the Jazzy one for a single issue. But Romita apparently recovered and met the deadline, so the story was shelved.

There were a couple of oddities about this story. First, although Andre's longtime inking partner, Mike Esposito, was already inking ASM under the nom de plume of Mickey Demeo, he was not given this assignment; instead the tale was inked by Bill Everett. And second, it looks very much like Romita redrew the faces of Gwen and Mary Jane here: 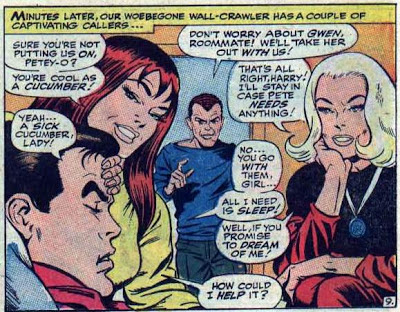 A friend of mine named Jeff pointed this out to me in an email. As I noted in response to him, what clinches it for me is that while MJ and Gwen both look reasonably normal, Harry doesn't look like himself at all; he looks more like the Sandman. This also gives us a clue that the story must have been drawn well before the publication date of May 1968, as Romita had changed Gwen's hairstyle by then to make it longer. She looks more like she did in 1967: By 1968 her hair was much longer and straighter: 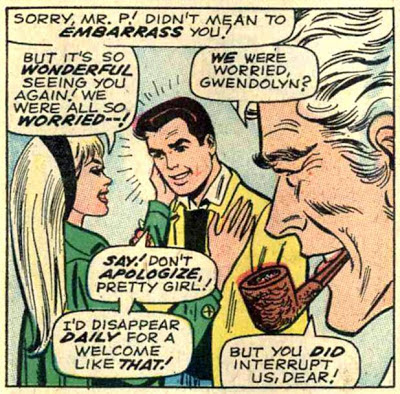 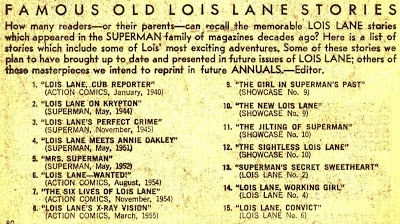 Why the scare quotes? Well, it turns out that a few of these stories never existed. Action Comics #20 is the January 1940 issue, and the (untitled) Superman story in that issue has Superman dealing with a headstrong actress; Lois doesn't even appear in there.  The May 1944 issue of Superman is #28, and it doesn't include any story with Lois on Krypton; at that point Superman didn't even know the name of his home planet.

Lois did not commit any crimes, perfect or flawed in the November 1945 issue of Superman, although she did meet a modern Annie Oakley in May 1951 (Superman #70).  She was featured in Mrs Superman (Superman #76) and wanted in Action #195, and had six lives in Action #198 and X-ray vision in Action #202.  The stories listed in the Showcase tryouts and Lois's own magazine are real, so overall, there were three stories (the first three) that never existed, out of the fifteen.

And, oddly enough, that turns out to be pretty good as the next Lois Lane Annual had seven phony baloney stories:

Well, my guess is that Weisinger just didn't care if he got that list right; back then the assumption was that nobody would ever check this stuff.  There are some pretty obvious problems with the above list: Superboy didn't have his own magazine until 1949, and Showcase #8 was a Flash issue, not a Lois Lane tryout.
Posted by Pat at 7:01 PM 3 comments: 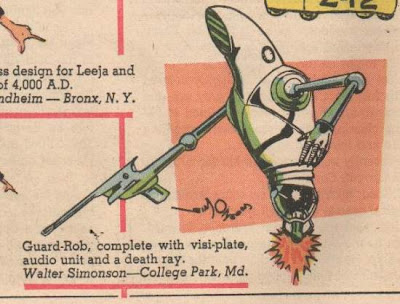 From Magnus, Robot Fighter #10, May 1965, about 8 years before his first official work for DC (Weird War Tales) and about the same amount of time before his famed work on Manhunter, one of my favorite series of all time.
Posted by Pat at 12:08 AM No comments:

In Search of... Aliens


When I was young, before I started collecting comics (I collected and traded them between 1960 and 1966) I used to read my uncle's. This would have been in the very early sixties, 1961 to 63 probably (he was about 16).
I remember him having many comics that had a serial for a few pages in the back of (main) comic book I’m not sure who the publisher was, could have been Charlton, DC, I don’t remember, although it was before Marvel and Gold Key.
In any case, in the serial I’m hoping to chase down, the main character(s) for what i can remember were in contact with another race of advanced men who had tall heads, sort of like an Egyptian pharaohs’ crown and I think their bodies were colored, like light blue or green or? I can’t remember too much. I remember these people were found behind a wall or partition, almost like another dimension and our main characters were interacting with them somehow when they came in contact with them. Sorry it’s not much, but does it ring any bells?
My uncle only had comics like war comics, Magnus Robot Fighter, DC, Charlton, was there an AC?

Comments by Pat: I suggested The Aliens from Magnus, Robot Fighter, but after reading my post on them, Darell responded that while he remembered that series, it was not the one he had in mind.  Any ideas, fellow Silver Age fans?  I don't think it could be Marvel, because it doesn't fit the serial requirement.  Despite what Darell says, I would not rule out Gold Key; they started publishing in 1962, so they would not be entirely outside of the 1961-63 timeframe he mentions.  I don't think it could be ACG; they didn't have any serials that I can remember in any of their science-fiction books.  Charlton, or Dell, maybe?
Posted by Pat at 7:37 AM No comments:

Superman gets emphatic at the UN: 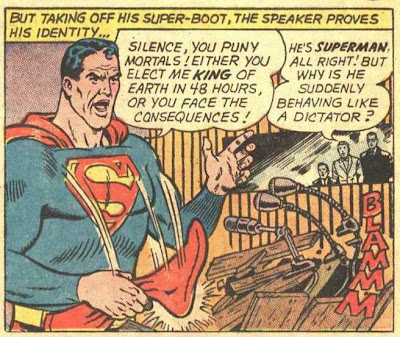 This refers to a famous supposed incident when Nikita Kruschev, then ruler of the Soviet Union, supposedly banged his shoe on the desk in anger during a debate at the United Nations. This was, as several sources note, an iconic and comic moment, one that was commonly satirized during the 1960s. But according to the NY Times, it may have never (quite) happened:


Did he or didn't he? A KGB general remembered that Khrushchev banged the shoe rhythmically, "like a metronome." A UN staffer claimed Khrushchev didn't remove his shoe ("he couldn't have," she recalled, because the size of his stomach prevented him from reaching under the table), but it fell off when a journalist stepped on his heel. The staffer said she passed the shoe wrapped in a napkin to Khrushchev, after which he did indeed bang it. Viktor Sukhodrev, Khrushchev's brilliant interpreter, remembers that his boss pounded the UN desk so hard with his fists that his watch stopped, at which point, irritated by the fact that some "capitalist lackey" had in effect broken a good watch, Khrushchev took off his shoe and began banging. When I talked about Khrushchev to veterans of his era in Washington, one eyewitness confirmed the banging. But another eyewitness confirmed the nonbanging. A third, who said he'd been standing several feet behind the premier, insisted that the heel of the hand that held the shoe slammed the desk but that shoe never actually touched it.

So we may never know if Kruschev actually banged his shoe or not. Superman? Hey, it's there in living color.
Posted by Pat at 12:29 AM 3 comments: