Now that is creepy. As a kid you could buy the notion that scientists were gods and that they never screwed up, but as an adult, the idea of "electro-re-education" makes me want to scream and run for a cave.
Posted by Pat at 9:19 PM No comments:

In Flash #106-108 we were introduced to a complete different civilization, not living on another planet, but here on Earth.

Gorilla City is located in Africa. It occupies the same space as the jungle, but vibrates on a slightly different plane. In Flash #106, Barry Allen discovers its existence from the greatest mind on earth, a gorilla named Solovar who has figured out how to control the minds of others.

An evil gorilla named Grodd steals the secret from Solovar during a crime spree in Central City. Grodd returns to Gorilla City with the intention of becoming first its dictator, and then the leader of the world. However, Solovar contacts the Flash and the Scarlet Speedster manages to capture the super-gorilla and drive the knowledge of mind control from him.

In the following issue it is discovered that Grodd has not lost his mind control powers. We also learn of the lax nature of Gorilla City's prison security: 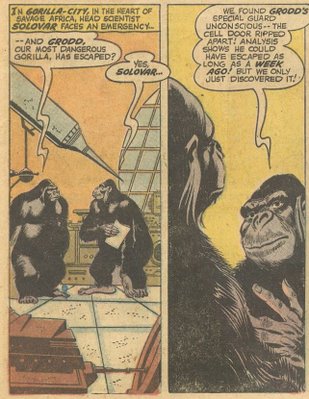 Gee, good thing we thought to check on Grodd's prison guard... after a week! He's escaped to a world just beneath the Earth's crust, inhabited by winged people. I can't be positive but I don't think this civilization ever appeared again in another DC story. Anyway, Grodd has used his mind control powers to take over this subterranean world and is preparing another onslaught on the rest of the world. He plans to use a "devolutionizer" ray to reduce the brainpower of the Gorilla City residents, while the strange air underground causes the air around Flash to crystalize when he tries to run too fast. Flash is briefly trapped, but manages to escape and once again find a way to subdue the Super-Gorilla.

In the final story, Barry Allen is startled to hear from his girlfriend Iris West that the Flash has a strong competitor for Central City Man of the Year. A brilliant man named Drew Dowden has made millions in the stock market and has hired workers for a factory that produces a product that nobody knows about.

But when Flash checks out Dowden, he is surprised to be attacked. It turns out that Dowden is secretly Grodd after bathing in an evolutionary ray that advances him beyond the mere humans. But Grodd reverts to his natural form and Flash defeats him yet again.

After this Grodd dramatically decreased his appearances, popping up only in Flash #115, then #127 and making his last appearance of the Silver Age in Flash #172.
Posted by Pat at 7:46 PM No comments: 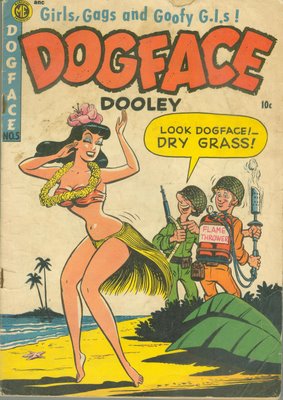 Of all the comic characters to make it through the Silver Age, Wonder Woman seems the least likely. Her comic was embarrassingly bad during the late 1950s and early 1960s, and in the late 1960s DC hopped her aboard the secret agent bandwagon just as the bloom was leaving that genre.

It is not that the character was intrinsically mediocre; indeed the Golden Age Wonder Woman was quite entertaining. Perhaps the Comics Code Authority meant that WW's adventures had to be toned down to eliminate the bondage and feminism that marked the earlier era?

Take for example this horrific issue from 1955, the very beginning of the Silver Age: 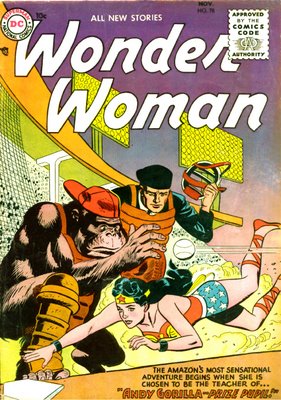 It's a gorilla! Playing baseball! With Wonder Woman!

The premise for the story is that Wonder Woman is helping out a little old lady that runs a private school. The terms of the will that endowed the school require that their baseball team meet another school's baseball team every year. Unfortunately, the little old lady's school has been quarantined for measels and thus will be unable to meet its obligations. So they enroll a gorilla... please stop laughing... and ask Wonder Woman to teach it.

So now it's down to the ballgame, featuring Wonder Woman and the Gorilla against the nine from the other school. And somehow now the loser of the game will have to merge with the other school. That's a funny kind of annual game--wouldn't it end after the first year? And since the mean old man who's the principal of the other school gets to set the rules of the game....

Of course, it's not hard to guess that Wonder Woman hits a homer.

Curiously, the "every year" phenomenon comes up again in the second story: 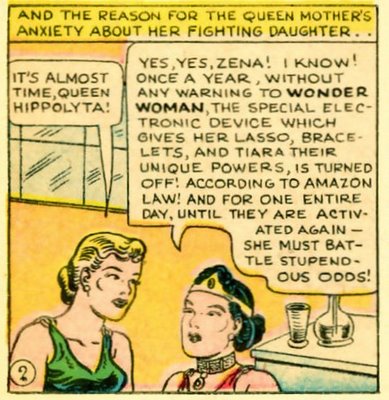 Somebody appears to have forgotten to tell Wonder Woman about this law, as every time one of her weapons fails, she remarks on how fortunate she is to have the others. Fortunately, with her ingenuity, she is able to overcome the weaknesses of her weapons for that one day.

The third story is actually an interesting one. In Wonder Woman's day job as Romance Editor of the Daily Globe (this appears to be the first time this is mentioned), she is offered $1,000,000 for charity if she will act out a three-act film. She discovers the role is quite dangerous (requiring her to fight a robot octopus for example), but continues to do her part because it's for charity. In the end, it turns out to be Wonder Woman's old nemesis, Angle Man, trying to get rid of her, but she catches him so the million plus the proceeds from the film are put to good use.
Posted by Pat at 3:54 PM 1 comment:

Clark and Lois Compete on "Survivor"?

This is slightly outside the range for the Silver Age, as it appeared in the March 1951 issue of Action Comics, but it's such a surprising story that I couldn't resist commenting. The story is entitled, Miss Robinson Crusoe, and the premise is summed up rather well here: 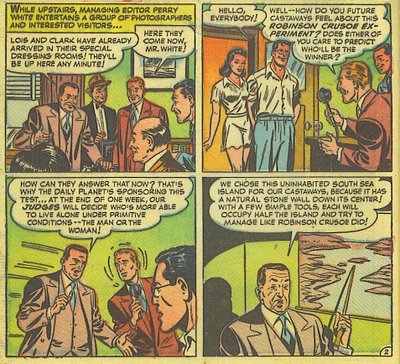 Of course, Clark looks a little startled there because he realizes it's unfair for him to compete against Lois in a Survivor-type contest because he doesn't need to eat. So he decides to secretly even things up as Superman. Lois spots him changing identities, but because she's getting ill she becomes convinced (with a little trickery from Clark) that she was hallucinating.
Posted by Pat at 6:36 PM No comments: