Yeah, Why is Lois Such a Secret Identity Pest?

Maybe it has something to do with sequences like this: 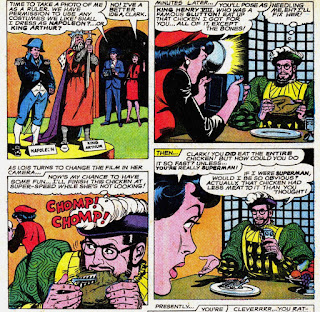 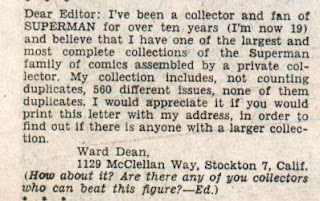 560 different Superman family comics may not sound like a lot these days, but back then this was very impressive.  First, I estimate that there were about 960 comics featuring Superman/Superboy or his friends, so it's almost 60% of the total.  Second, this was before there were comics shops, before there were the yellow-colored ads offering back issues for sale.  I'm sure that Ward had to scrounge everywhere to find that many comics featuring the Man of Steel.

I checked ahead in the next few issues and didn't see anybody writing in to claim they had topped his total.
Posted by Pat at 8:53 PM 2 comments:

I Finally Figured It Out!

Years ago, I wrote a post noting all the female characters that were introduced in DC comics starting in the late 1950s, and wondering why it all happened so suddenly:

I was focused on what was happening in the culture that would cause this sudden interest in female characters and I missed what was right in front of me all the time:


We don't have circulation numbers for any comics before 1960, but I suspect Lois Lane sold like hotcakes right from her first Showcase appearance.  By 1960 her mag was the #11 selling title in all of comics, moving 458,000 copies per issue. So of course the DC editors realized that there was a market to be tapped, and they rushed to try to fill it.
Posted by Pat at 11:22 PM No comments: