Marvel came out with the Ultimates series around 2000.  The idea was to create new series about their most popular characters, without requiring the reader to know all the continuity jazz that clutters up the regular comics.  Kind of like what DC did last year with the reboot of the entire universe.

Obviously in one sense these are startlingly modern comics.  People call each other on cellphones and the slang appears (granted, I am not up on teen trends even 13 years ago) more relevant.  Uncle Ben is an aging dude with a ponytail who reminisces at one point about his experiences in a commune.  It's kind of odd, but it makes sense; if the guy is roughly 55 in 2000, then he could easily have been a hippie in the late 1960s.

And the comics are largely interested in establishing the current continuity.  Peter always knew Mary Jane, she was his boyhood crush, Norman Osborne is a billionaire biochemist at whose plant Peter is bit by the spider, etc.  Indeed, if we look at these comics and the first Spiderman movie featuring Tobey Maguire a couple of years later, it looks like Sam Raimi borrowed more from USM than from ASM.

But at the same time, these are basically Silver Age comics in that they re-imagine those early stories in an updated fashion.  The opening sequence (as in Lee & Ditko's intro years ago) shows us that Peter Parker is a much put-upon young lad: 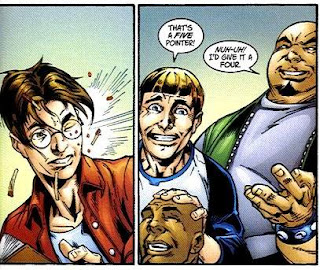 But despite much more hazing, we also see that Peter isn't a tattletale.  He suffers the slings and arrows and french fries of outrageous fortune stoically.

As is typical of modern comics, the story takes much longer to develop.  In Amazing Fantasy #15, Peter gets bitten, discovers his new powers, becomes a wrestler, fails to stop the crook, discovers Uncle Ben's death and catches the Burglar all in a startlingly compact 11 pages.  This first issue has 42 pages of story and art and we only get to the point where Peter is starting to understand the transformation that has hit him.

And yet, it does not seem padded.  Part of that is because there is a fair amount of groundwork being laid for future stories. We see that Norman Osborne is aware that Peter was bitten by the spider.  Initially, it appears that Peter will eventually die from the bite, and so Norman orders him killed. (Not terribly likely, by the way; what billionaire would care if a teen's guardians sued him for a million or so?)  But when Peter displays his extraordinary talents in avoiding getting run down by a car, Osborne calls off the hitman.  It is obvious that he is going to pay close attention to Mr Parker.  We also learn that Otto Octavius (aka Doc Ock) is one of Osborne's employees.

And some events are shifted around in time.  For example, Peter's big fight with Flash Thompson, which didn't come until ASM #8, is a highlight of the second issue: 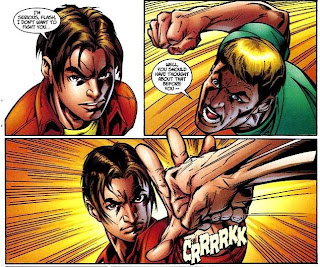 One oddball note: In this series, Mary Jane is not the airhead party girl that we knew and loved in the 1960s.  Instead, she's Brainy Janey.  Initially this bothered me, but it does make more sense. Would Peter really settle down with a gal who was so obviously his intellectual inferior?  Granted, she was gorgeous, but at some point you have to talk to each other, and Peter would not find her vapid responses terribly satisfying.

Overall, I very much enjoyed these first two issues and intend on reading more, although I doubt I will continue to post on them.
Posted by Pat at 10:25 PM 5 comments:

In early 1959, Whitney Ellsworth's name finally disappeared as editor from the indicia of every DC comic. It is well-established that he had actually ceased working in New York by the early 1950s, instead pitching DC's properties to Hollywood and the TV studios.

When the real editors were revealed, Julius Schwartz had a rather modest portfolio.  He was responsible for DC's two science-fiction series, Strange Adventures and Mystery in Space, giving him responsibility for 20 comic books a year, as SA was a monthly and MiS appeared eight times a year.

But when the Flash was added to his titles early that year, he boosted his production to 26 books (Flash started out as a bi-monthly).  Green Lantern started appearing every other month in mid-1960, and the Flash was promoted to eight times a year, so now Schwartz was editing 34 books per annum.  Briefly, because in late 1960 the Justice League of America began appearing, giving him the reins over 40 issues annually.

By the beginning of 1962, Green Lantern and JLA had been bumped up to eight issues a year, giving Schwartz responsibility for 44 comics per year.  But that didn't last long, as the Atom got his own title midway through that year, putting Schwartz at 50 issues per solar orbit.  The Flash got an annual in 1963 putting the number of Schwartz comics at 51.

Hawkman took awhile to win his wings as I have discussed in the past, but that gave Schwartz briefly 57 comics per annum. In May of 1964, Schwartz was handed responsibility for Detective and Batman, although in return he was relieved of Strange Adventures and Mystery in Space, the two titles he had at the beginning of his empire-building.  Although the swap seemed even up with Detective having as many issues as SA, and Batman an equal amount as MiS, Batman did have the Summer and Winter Annuals, ticking Schwartz up to 59 books annually.  Correction: As noted in the comments by Christoph Melchert, Jack Schiff continued editing the Batman Annuals for awhile; he is credited in those issues up until Batman #198 when Nelson Bridwell took over.  Schwartz did get credit for editing Batman #176; I am not sure if that is just a mistake or what.

That's a pretty hefty workload, especially when you consider that in addition to editing, Schwartz also wrote the filler for his books (unlike many of the other editors, who used Henry Boltinoff's gag strips).  Flash had Flash Facts and Amazing Speeds, while for Green Lantern Schwartz gave vocabulary lessons with "What's the Difference" and imitated Ripley with "It's Hard to Believe, But..."

Update: Martin O'Hearn points out in the comments that Schwartz did have a few other titles in his stable as of 1959.  Western Comics and All-Star Western were both published until 1961, and the last few issues of Rex the Wonder Dog and Hopalong Cassidy (both cancelled in mid-1959) bear his name on the indicia.  Good catch, Martin!

This also brings up another interesting point.  Who worked on those last couple of issues of Rex?  John Broome did the writing chores; guess who became the main writer on the Flash?  And Carmine Infantino did the Detective Chimp backup series in those comics; he became the penciller on the Flash.  Gil Kane did the pencils on Rex and Hopalong; he did the same for Green Lantern and (eventually) the Atom.  I haven't taken a hard look at it, but I suspect that when Rex and Hoppy were cancelled, Kane suddenly started doing a lot more stories in Strange Adventures and Mystery In Space until GL and the Atom filled up his schedule.

In other words, what in isolation may appear like x comic was cancelled and (completely unrelated) y comic was started may simply have been a reallocation of existing resources.  Remember, all these creative talents were making a living working for the individual editors at DC, and there was no particular reason to furlough them just because a genre (like westerns) happened to go out of vogue.  As well, recall that DC was remarkably consistent in terms of the number of comics it put out during the Silver Age.  They basically put out 360 comics a year, every year.  That number might vary widely by genre, as I have discussed in the past, but it stayed right around 360.  Therefore, they still needed the same amount of script and artwork done every year.
Posted by Pat at 11:03 PM 10 comments: