In January of 1966, the Batman TV show debuted and it seemed like the whole country went Bat-mad.  Perhaps in an effort to make clear the other comics that were coming to us from the fine folks who brought us the Caped Crusader, DC came up with the Go-Go-Chex idea; all of their comics starting in January 1966 or so had a checkerboard pattern at the top.  Here's the first Batman issue:
As you can see, it prominently features the Riddler, the villain Batman and Robin faced in the first episode of the TV show. 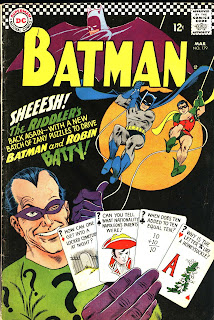 Anyway, since we have pretty good circulation data on a bunch of DC mags for 1965 and 1966, I thought I'd take a look at what the Batman effect was like on the rest of the line.

In a word, grim. This was definitely not the case of a rising tide lifting all boats.  Although it is undeniable that Batman brought lots of new comic fans to DC, they mostly only bought Batman titles, as did a lot of existing comics buyers, to the obvious detriment of almost the rest of the DC line.

Superman, which had forever been DC's best-selling title, not only dropped out of first place, but it sold a startling 100,000 fewer copies per issue than it had the year before.  And that was only the beginning; his related titles also took big hits in circulation--Superboy down 64,000, Lois Lane down 25,000, Jimmy Olsen down 32,000, Action and Adventure down about 35,000 each.  No surprise, the only Superman-related title that did better was World's Finest (up 47,000), the one he shared with Batman.

Nor were other comics spared.  Green Lantern and the Atom both shed about 25,000 buyers per issue. GI Combat dropped a stunning 65,000.  All of the comics mentioned were still selling over 200,000 copies per issue, and the Superman titles were almost all selling over a half-million.

Keep in mind too that in general comics circulation had increased quite nicely after the sudden drop caused by the increase in price from 10 cents to 12 cents.  For example, Superman, which sold 740,000 copies an issue in 1962, was up to almost 824,000 copies by 1965, a rise of over 11%.  Generally we would expect given the times for all these comics to show modest increases in circulation due to the bulge of the Baby Boomers coming into their comic-buying prime

But there is no denying that the declines must have been painful to DC editors not named Julius Schwartz. Batman and Detective Comics sales under his editorship soared (as did sales of the Brave and the Bold, which began to feature Batman in most issues).  But Schwartz made sure to feature Batman prominently on the Justice League of America covers, sometimes ridiculously so: 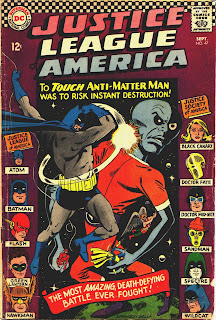 Okay, there's Batman flying in outer space punching some alien who supposedly can destroy him instantly.  And there's the usual floating heads to tell us that this is a JLA-JSA team-up. 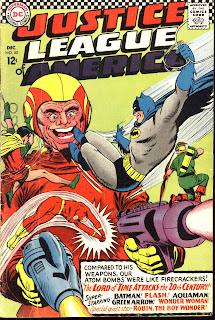 Batman again dominates the foreground and this time there's even Robin.

Justice League of America was one of the very few DC superhero titles that actually gained circulation from 1965-1966, with a pickup of 18,000 copies per issue.

Flash was another character who gained some circulation (about 27,000).  This obvious bit of cross-selling may have helped: 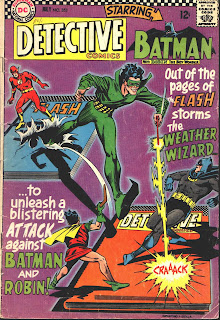 For the superhero titles DC reported sales for in both years, it is quite obvious that DC's overall circulation was up quite substantially.  For those titles (including all the Batman titles) they showed a increase of about 3 million issues per annum. But Batman and Detective sold about 5.6 million more copies, which means the rest of DC's superhero line got crushed. 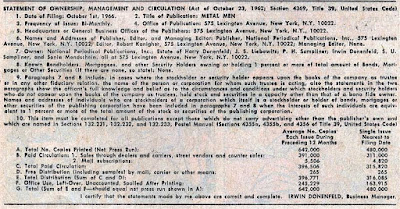