I wrote a long time ago about the saga of Lady Blackhawk, one of the female characters that DC introduced in the late 1950s to try to get more girls to read their magazines. Zinda Blake was an aviatrix who aspired to become the first distaff member of the Blackhawk family. Unfortunately for her, Blackhawk himself was dead set against it, and at least in her initial appearance she proved to be not quite ready for primetime when she did the eekamouse routine.

However, she returned often and proved herself worthy.  Then in Blackhawk #200 she lost her memory and became the villainess, Queen Killer Shark, pairing up with the team's worst enemy for the next two years or so, before eventually recovering (shortly before the Blackhawk series ended).

I've always had a soft spot in my heart for Lady Blackhawk, and so when a writer named Kevin Ahearn asked me to read his Lady Blackhawk comic, I was intrigued and clicked on the link. And read through the entire thing in one go.  I don't want to get caught up in summarizing it, but it's really cool. Kevin has put together an awesome collection of images, connected them with his writing, thrown in pop culture and history and technical references in a collage that ends  up being a history of the Blackhawks, as well as a "her" story about Zinda and her quest to join the team.  I had a blast reading it and hope that you folks will as well.  Please feel free to leave comments for Kevin here.

As it happened, I had been working on a post about Blackhawk and women, so the timing was right as well.  My own personal collection of Blackhawk issues was all 1960s issues, so apart from a few reprints I really hadn't read much of the Quality stories. And since Quality published right up to the end of 1956, there are technically quite a few issues that I consider to be in the Silver Age.

So I set out to read those issues, and I discovered something quite startling, which sheds a new light on why Blackhawk may have been suspicious of Lady Blackhawk. All I can say is that you'd be suspicious too if you'd had the experience with women that he had, especially with women who professed to admire the team. 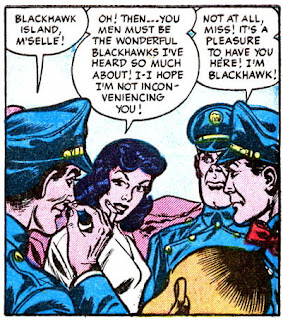 Blackhawk at this point was not the female skeptic that he would later become, and this gal goes a long way to showing why he moved rapidly in that direction: 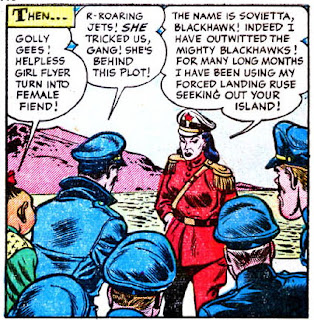 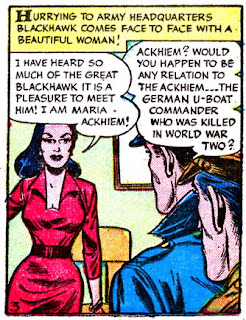 You mean my uncle?  Yes, but I'm not a Nazi submarine commander myself.  Oh, wait, I totally am.

In Blackhawk #90, the team rescues a gal from the Reds: 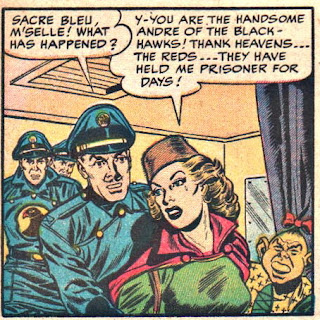 Beautiful woman? Check. Professes to admire the Blackhawks? Check. Turns out to be evil? 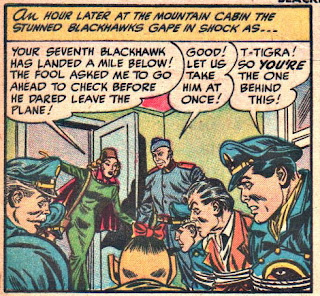 In Blackhawk #93 we meet Sirena: 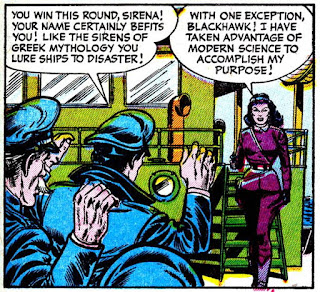 Although she at least never pretends to be anything other than a commie rat.

And in #94, the Black Widow trapped the Blackhawks in her web: 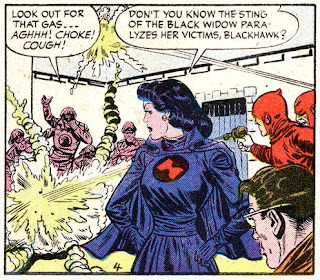 One must admire how advanced the Soviets were in their treatment of women, who were constantly being given positions of power.  In Blackhawk #95 the gals took over completely. First there was the commie pirate Madame Fury: 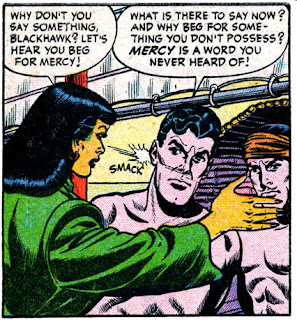 And then the more fittingly named Terra: 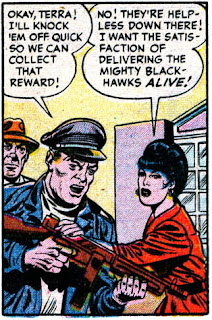 and closing with Lahla of the desert: 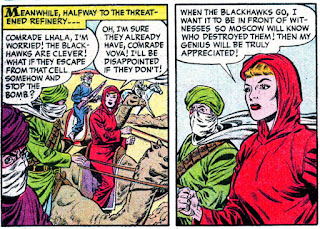 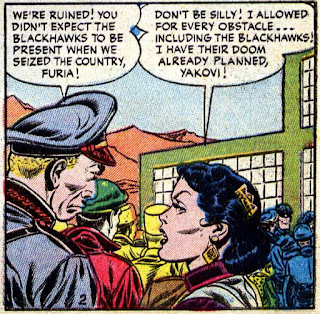 And another beauty who tried to kill Andre: 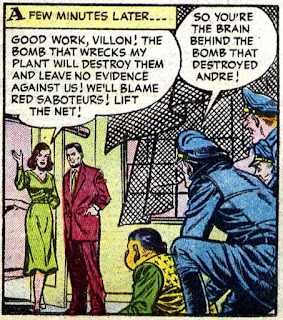 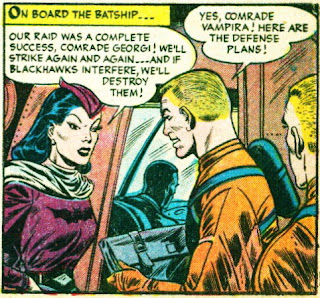 And Hitla, a gal who claimed to be Adolf's daughter: 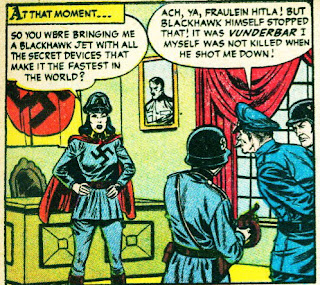 She pretends to be leading a revival of the Nazis, but secretly she is aiding a communist invasion. Her plot is foiled by Hendrikson, who gets in a pretty good dig: 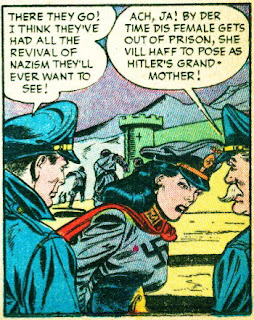 That's even before we talk about Communa and Zera and Dr Leza and Vendetta.  Keep in mind this is all in the course of about a year and a half.

And things did not entirely change when Blackhawk switched over to DC.  In #109 they met Maria, the daughter of communist revolutionary. She initially betrays them, but rebels when she learns they are to be executed and repents her evil past.

But perhaps the clincher came in Blackhawk #110. Once again, the Blackhawks met a pretty gal who pretended to be a big fan: 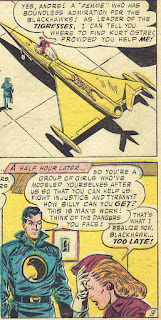 Yes, we admire you Blackhawks so much, would mind walking over this trapdoor here? 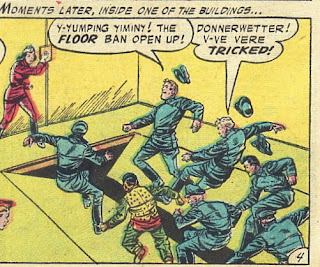 So after all that, is it really surprising that Blackhawk was a little cynical about Zinda?