This August 1957 issue is still done in the GA style with Harry Peter's inimitable style. The first story concerns a missing train that aliens have kidnapped. Wonder Woman foils their plot. More amusing is this side bit with Diana and Steve: 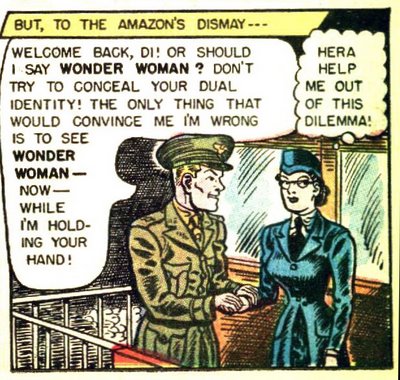 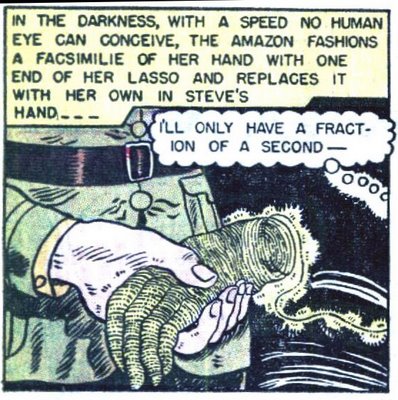 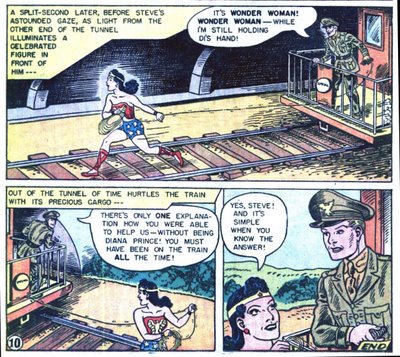 The second story is a 6-page short but it's a pretty good story, featuring Wonder Woman's longtime nemesis, Angle-Man. He tapes Wonder Woman commanding her invisible plane, then uses the recordings to prevent the plane from helping WW.

Wonder Woman foils a criminal circus gang in the third story.
Posted by Pat at 9:13 PM No comments:

This is arguably outside the normal realm of this blog, as it was published by ACG in 1954. During a brief era of popularity for 3-D comics, ACG came up with an interesting process that didn't require glasses. 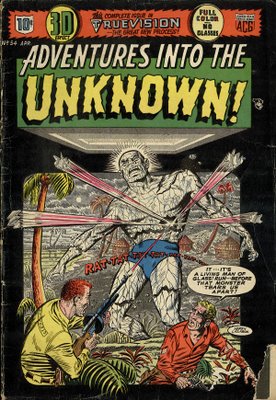 As you can see, the result was visually pleasing: 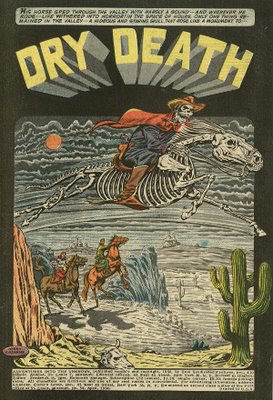 The effect used several tricks. First, the extension of the drawings outside the frame appears more obvious with the black pages. Second, people are drawn in bright colors while backgrounds are pastels or light greys. Not terribly difficult but it was a nice break from the glasses of the era.
Posted by Pat at 11:14 PM No comments: 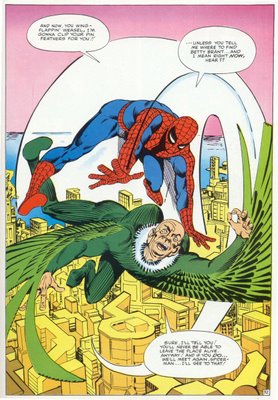 And there's an interesting pop culture reference. At the end Aunt May gets upset when she realizes that while she was out she missed the Beverly Hillbillies. In 1964 the Beverly Hillbillies became the only TV show to be #1 in its first season, and was a genuine phenomenon, although I suspect that had more to do with Boomer kids than old ladies in Forest Hills.
Posted by Pat at 11:00 AM 1 comment: 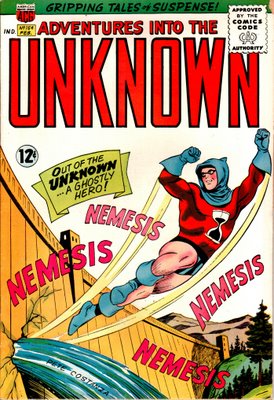 The series lasted for two years before finally giving up the ghost after #170. Adventures into the Unknown lasted until #174 before expiring itself along with American Comics Group.
Posted by Pat at 8:14 PM No comments:

By these issues, Peter was becoming so "hip" that the series seemed more like Archie at times: 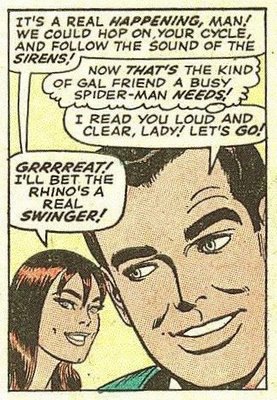 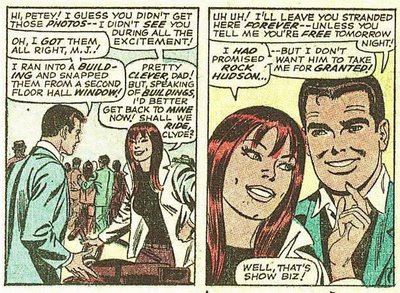 Of course, based on what we know now, Rock would rather have been dating Peter.

And then again the comic would suddenly turn topical: 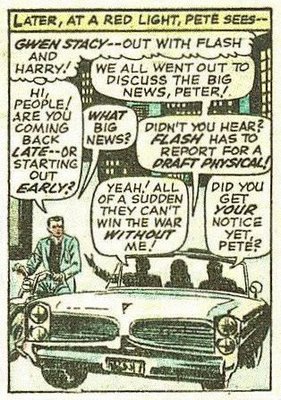 Perhaps an early omen of the "relevant" comics of the later 1960s?

But fortunately, Stan didn't let the soap opera aspects of his comics reduce the number of punches thrown between Spidey and his enemies.

ASM #43 features the return of the Rhino, once again after JJJ's son (apparently unaware that Spiderman has killed the space spores that made him valuable). But Spidey manages to destroy his hard skin with a special type of webbing that Dr Curt Connors (aka the Lizard) has helped devise.

In the next issue Peter is at Grand Central when he spots Dr Connors, who looks troubled. Sure, enough, the doc dashes off as he feels the transformation back into the Lizard coming on. Once again his dreams of conquering the world with lizards like him resumes.

Spidey's left arm is hurt in his first battle with the Lizard, and it's put in a sling. This causes him continuing trouble for the next few issues; just another example of throwing rocks at the hero.

Spiderman has a climactic battle in the railroad yards with the Lizard. In a moment of inspiration, he angers the reptile, who follows him into a refrigerated car. The cold-blooded creature soon is powerless, and Spiderman is able to take him back to New York and give him an antidote.

But it's on the personal side that some of the most interesting stuff happens. As noted above, Flash Thompson is drafted into the army, a jarring reminder of how old these comics are, since nobody's been drafted since 1972. Betty Brant and Ned Leeds get engaged. And Peter's budding interest in Gwen Stacy is thrown for a loop by the arrival of Mary Jane. Harry Osborn goes out of his way to be more friendly to Peter, setting the stage for the next big change in Peter's life.
Posted by Pat at 7:39 PM No comments: 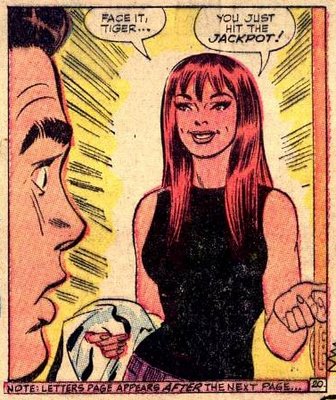