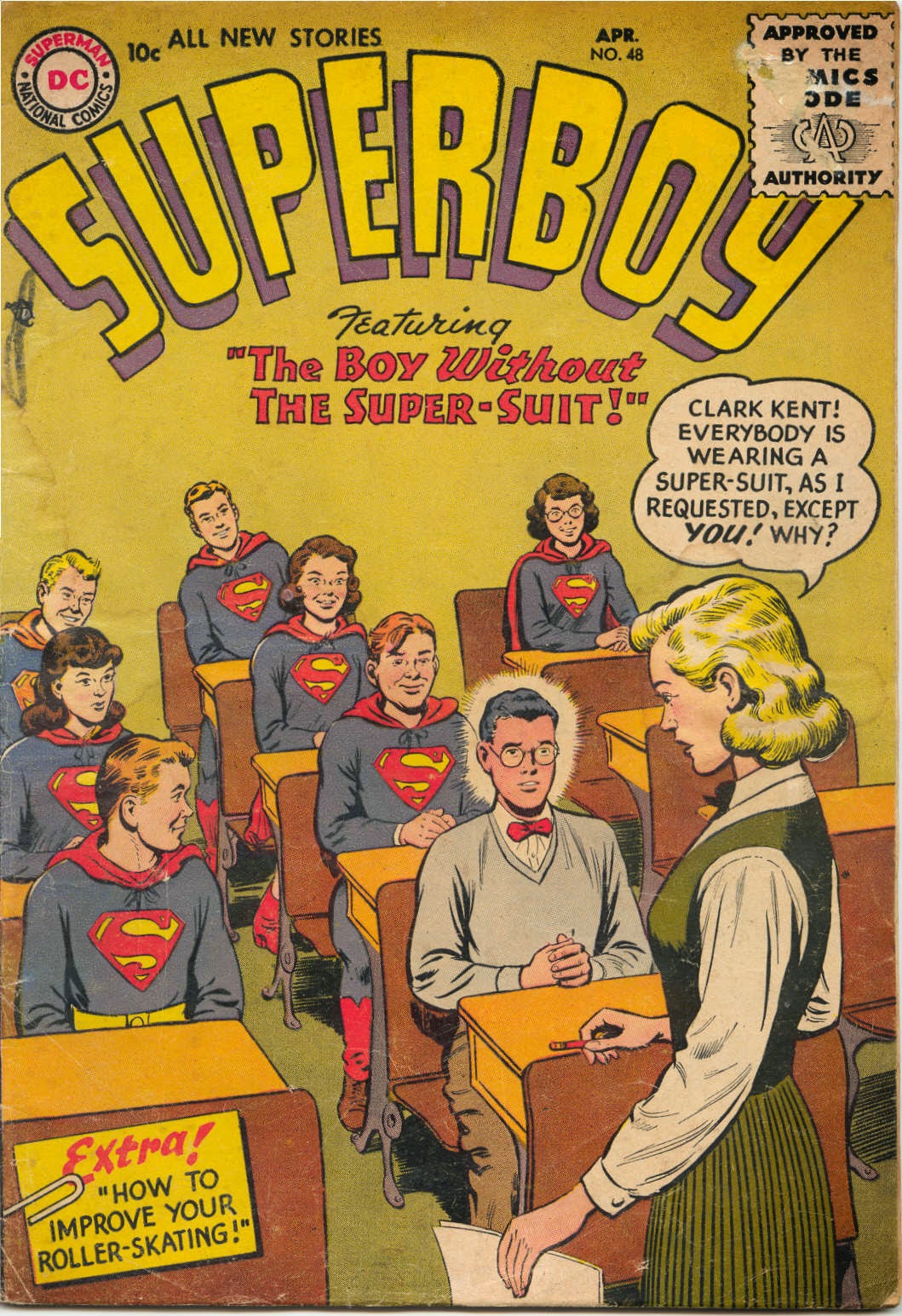 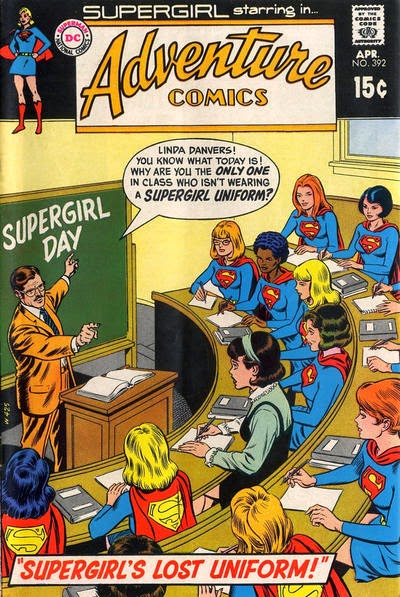 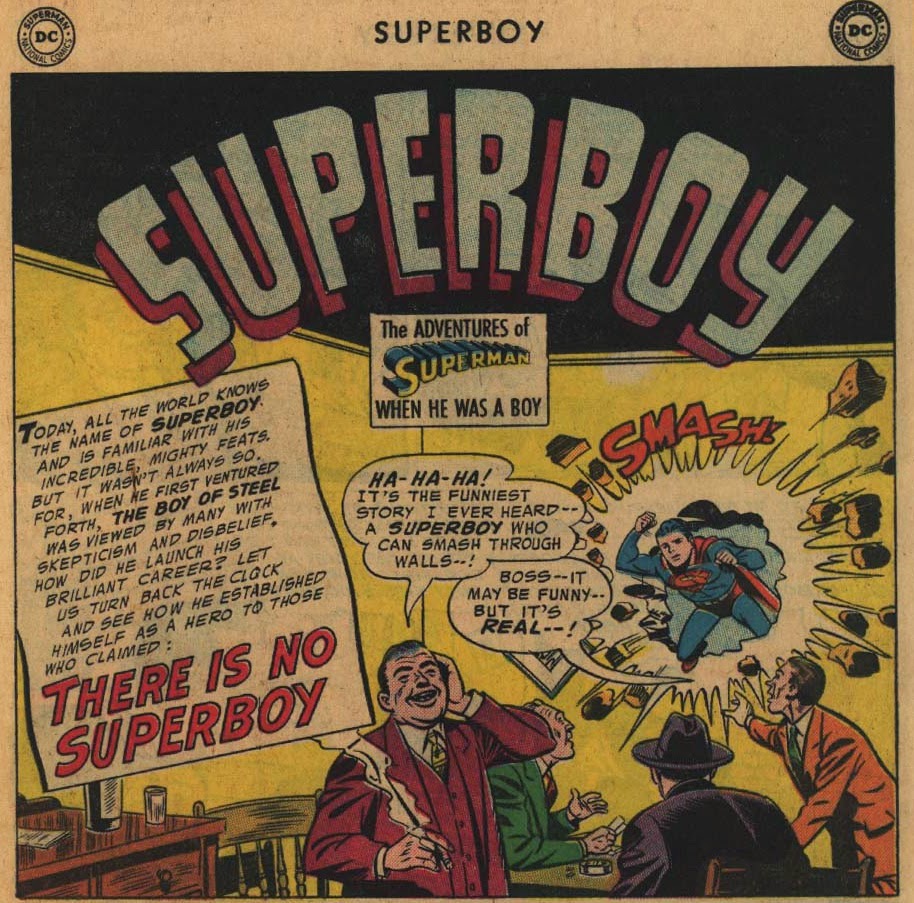 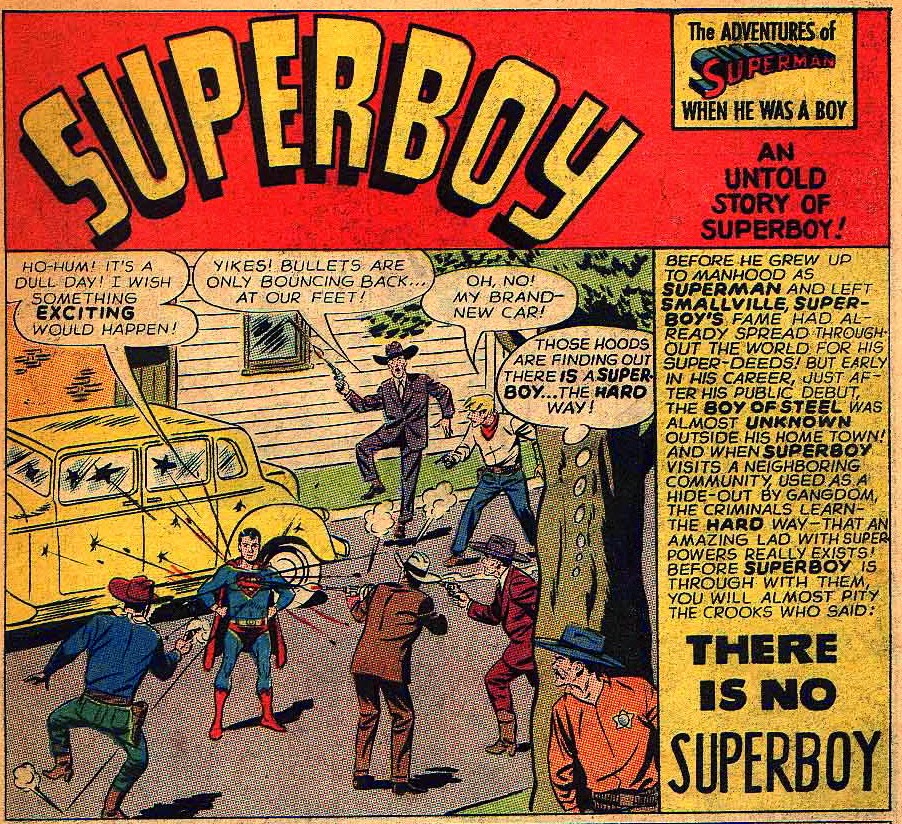 Same concept, different execution. In the first story (from Superboy #50) a gang of crooks have come to Smallville to hide out with their loot, although one of the underlings is worried about the rumors that a young lad has super powers has recently been making things tough for the local criminals.  The boss, as shown, finds the concept of a Superboy to be ridiculous, although he soon learns otherwise.  In the later story, Superboy goes to a nearby old West town where the local hoods haven't heard of him.
Posted by Pat at 3:52 PM 1 comment: 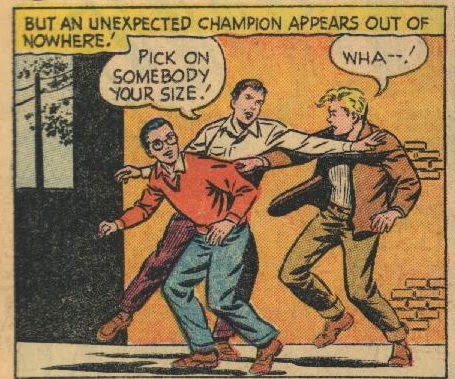 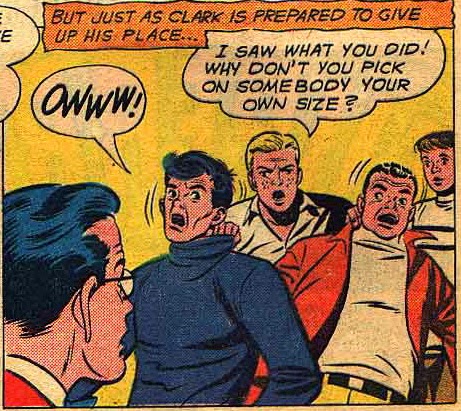 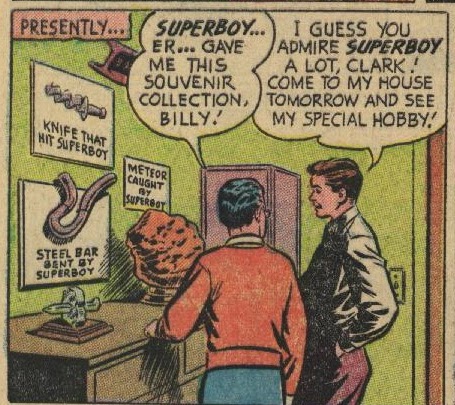 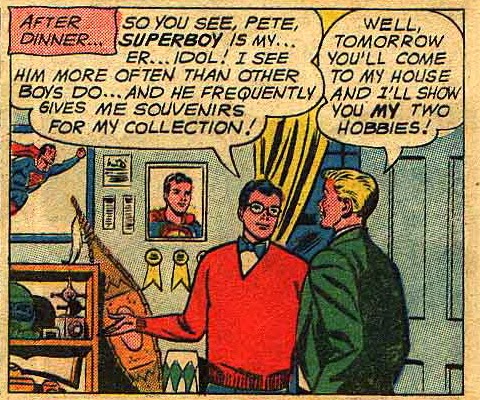 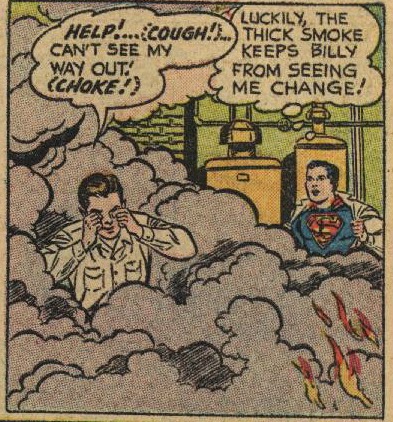 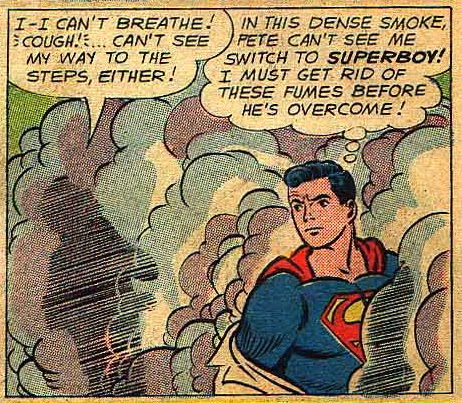 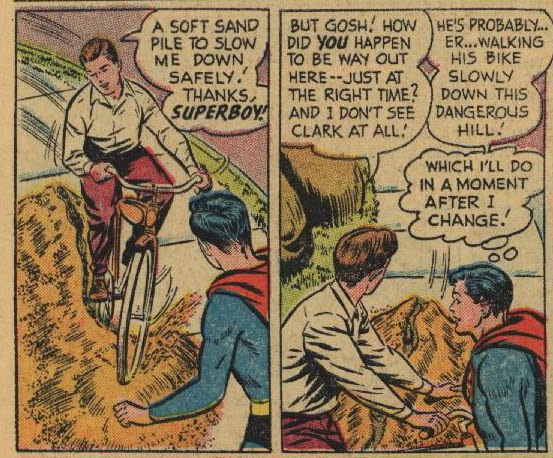 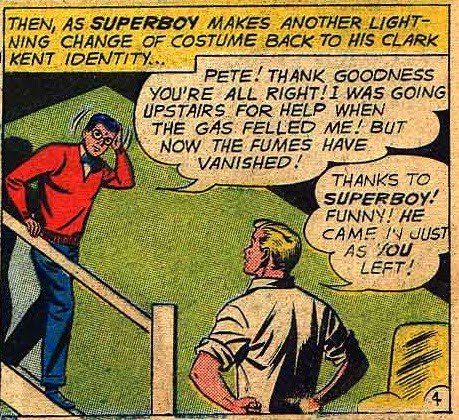 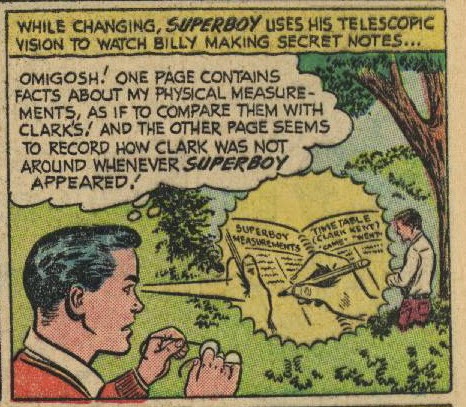 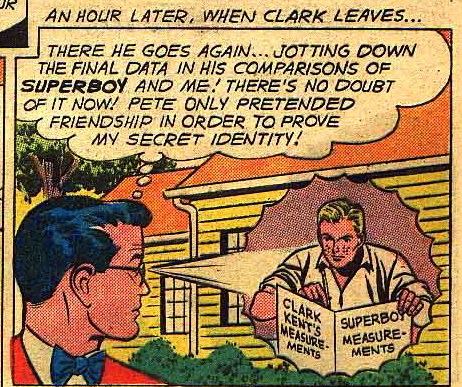 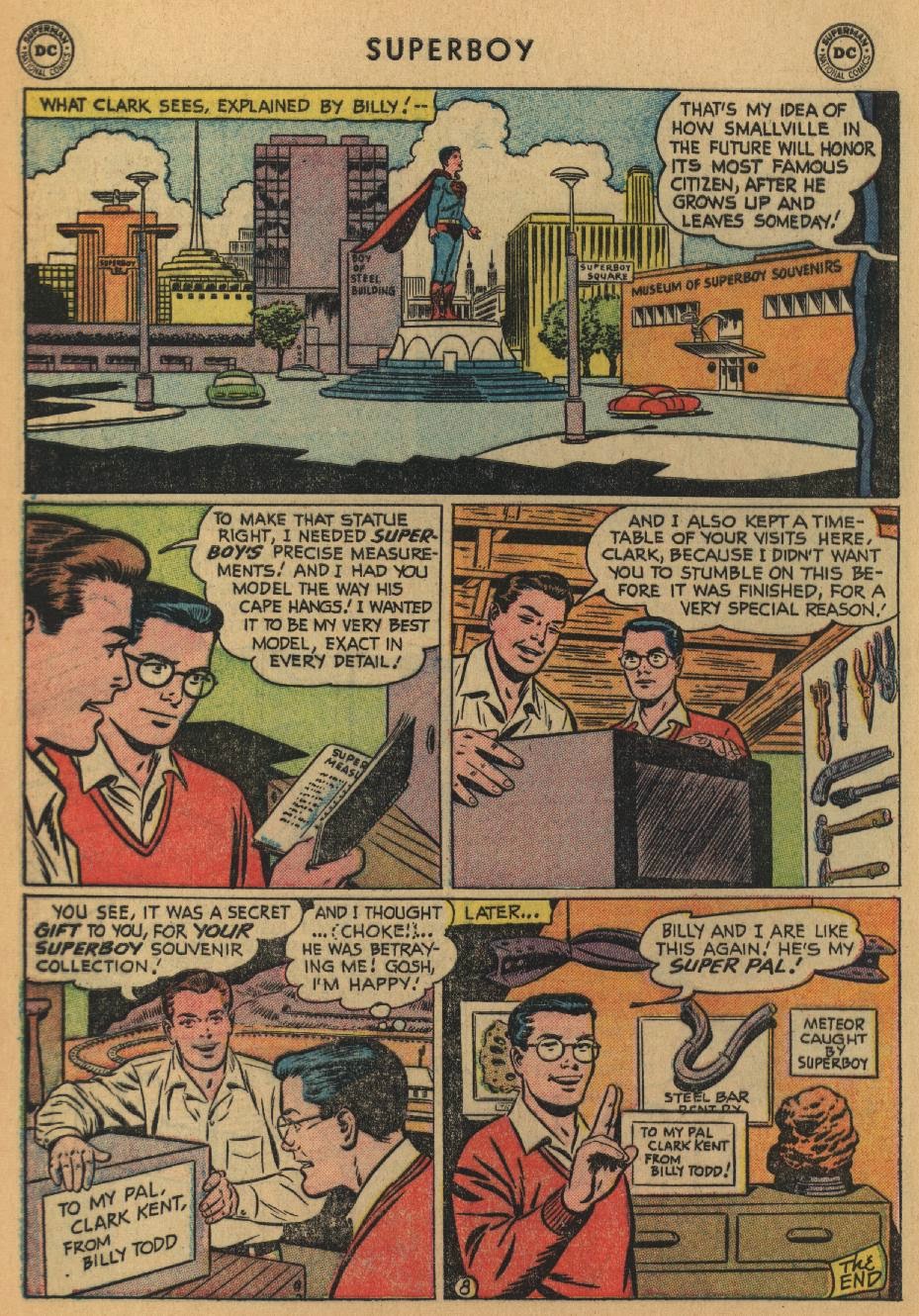 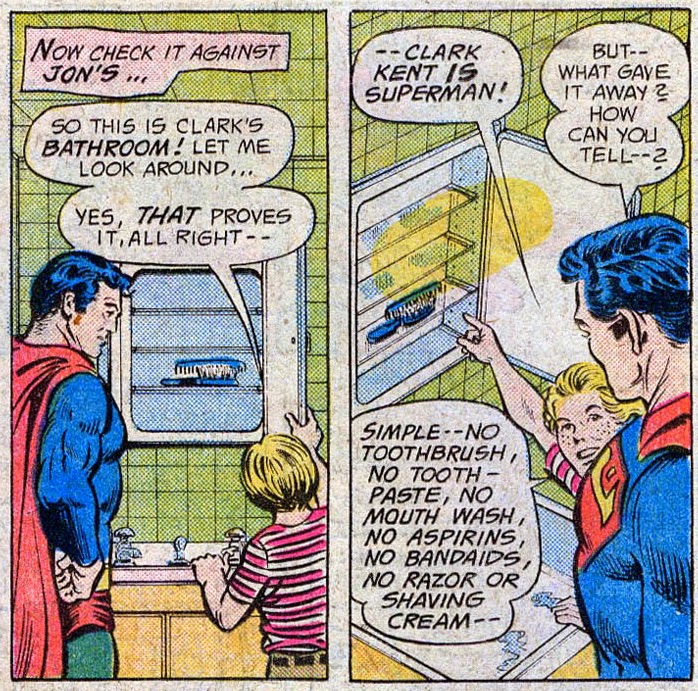 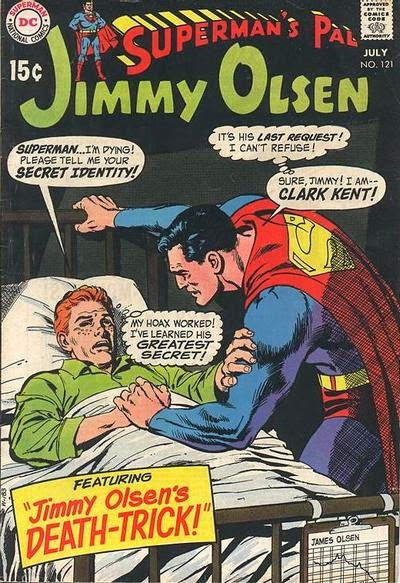 You Can Learn a Lot from Comic Books

Some of which just ain't so.  Consider these two amazing "facts" which I discovered while reading a couple of Superboy issues from 1954-1955: 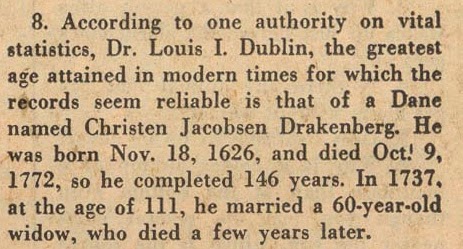 I can imagine a kid believing those things, but an adult should be just a little more skeptical.  Women in general live longer than men (about 7 years longer the last I heard), so it would be quite surprising to learn that a man actually held the title for the oldest documented living human.  We would also, given advances in medicine and corresponding advances in average life expectancy, for the oldest person ever to me more recent.  And in fact, according to Wikipedia, the current record for the oldest person is a Frenchwoman named Jeanne Calment, who passed away just 17 years ago at age 122.  In fact, of the ten longest-living people, only one (the tenth) was a man.

As for Drakenberg, simple math reveals that even with the dates given he did not "complete 146 years," but 145.  And this website reveals why that age is suspect at best:

The certificate also states the names of Drakenberg's parents, and of the farm at which he was born. In the postscript of the latest edition of Drakenberg's biography from 1972 Paul G. Ørberg disproves all the facts listed in this certificate (Ørberg 1972). The vicar of Skee in 1732 was Johan Schoug and the vicar in 1626 was Christoffer Lauritzen Friis; the two vicars named in the document have apparently never existed. The farm on which Drakenberg had allegedly been born had just been built in 1626, and was owned by someone else; no trace can be found of the people named as Drakenberg's parents and finally no church register going back to 1626 exists from the church of Skee, and it is doubtful whether one ever has. In other words the certificate proving the amazing age of Drakenberg is a forgery, though a very successful one.


As for the male deer bot fly Wikipedia notes:

In 1938 Irving Langmuir, recipient of the 1932 Nobel Prize in Chemistry, examined the claim in detail and refuted the estimate. Among his specific criticisms were:
And in fact the current estimate for this little fellow is a relatively sedate 25 mph.

Here's another bit from a text piece on how the toys of the 1950s were preparing kids for the jobs of tomorrow:

Now that may seem a bit sexist, but this was the 1950s when Dad went off to work and Mom took care of the kids.  In fact, my mother (before she got married) had her first job as a switchboard operator.  But I certainly hope no young girls practiced too hard on this toy, as the switchboard was already on its way out.
Posted by Pat at 3:09 PM 4 comments:

What Do These Two Covers Have In Common? 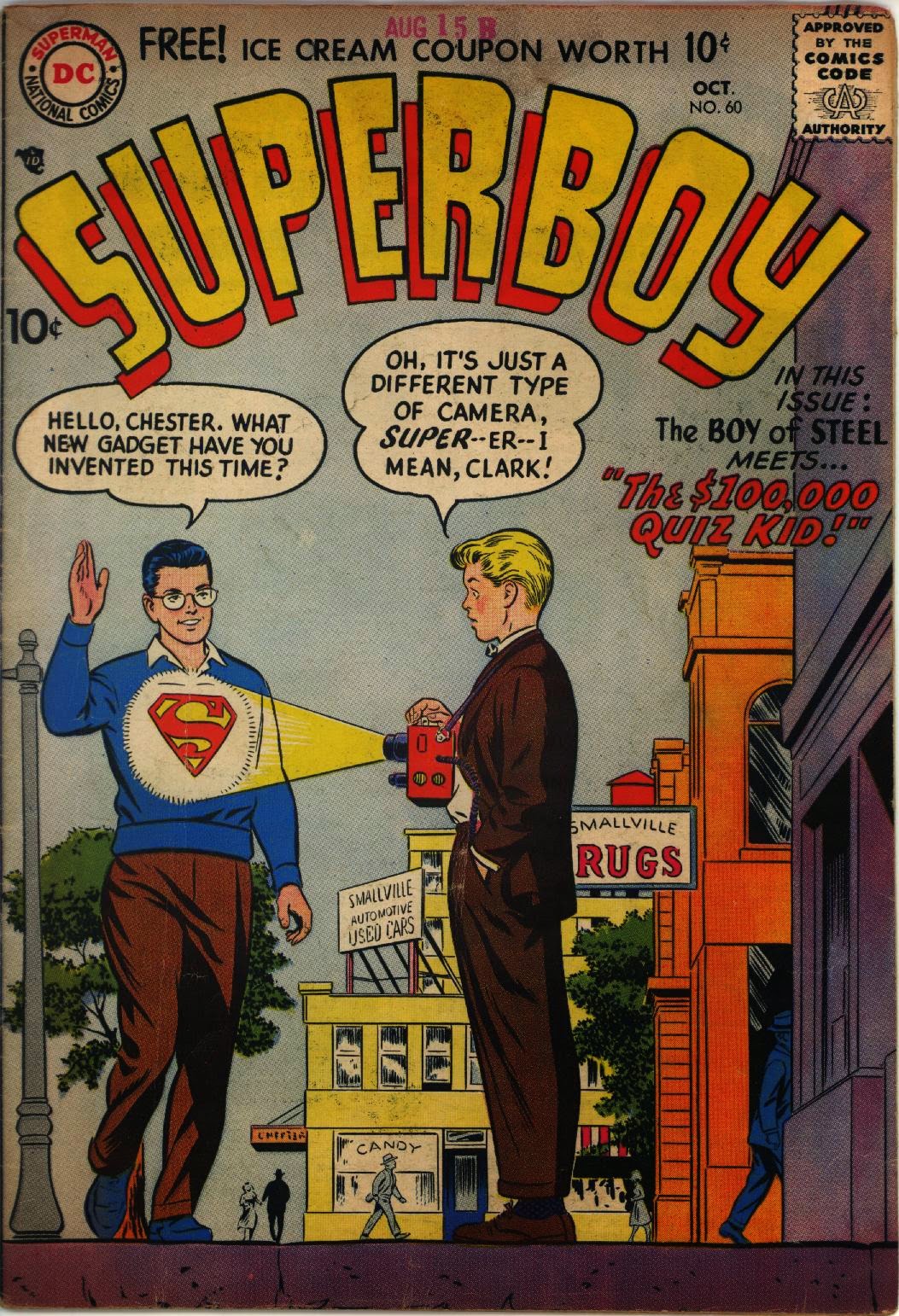 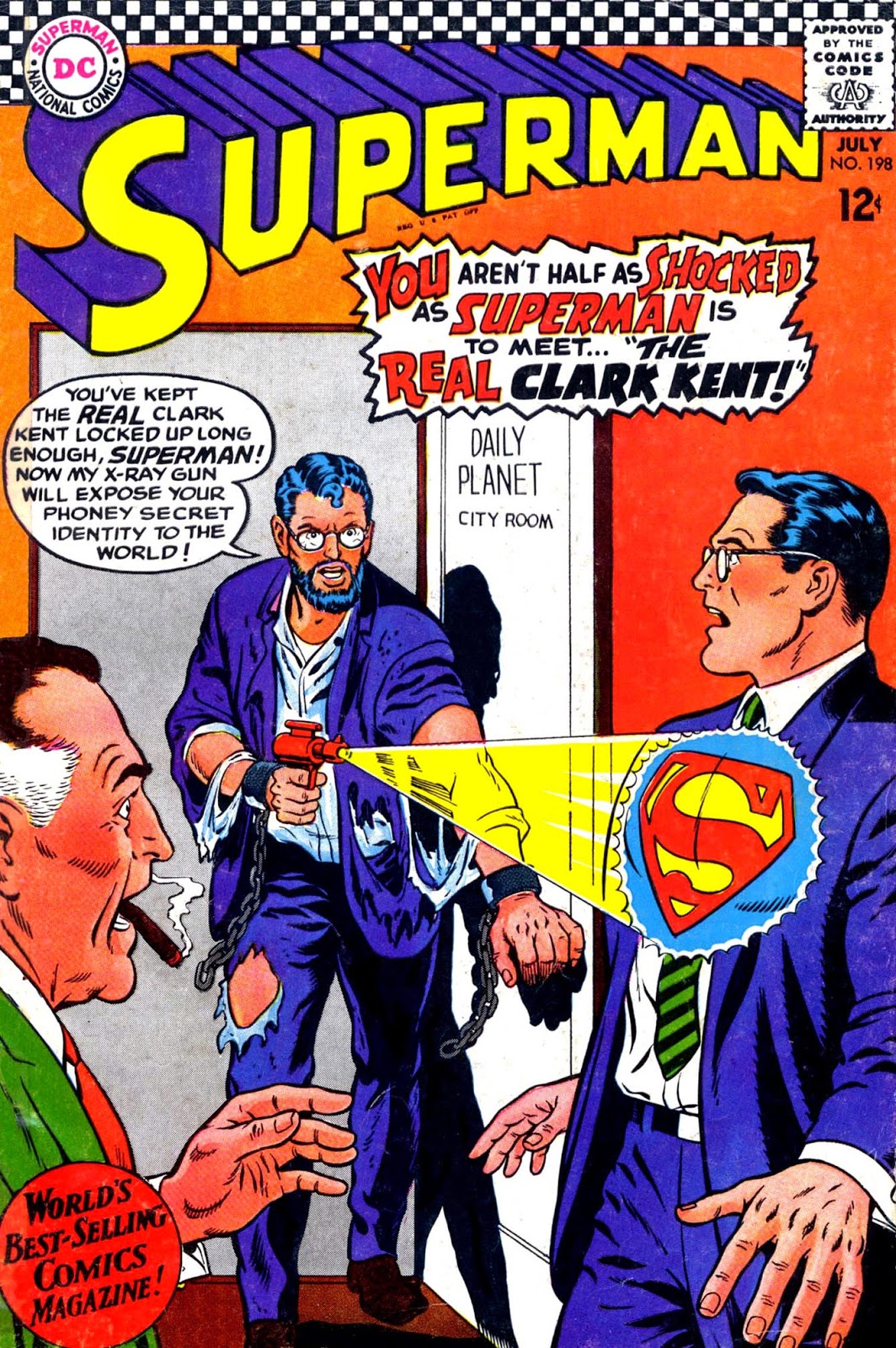 It's pretty obviously the gadget that somehow sees through clothing to reveal the S insignia on Superboy's/Superman's costume.  These gadgets are referred to in the stories as X-rays, although of course they do not work the way X-rays really do.  A real X-ray actually goes entirely through the person until it hits the film which then reveals the internal organs and bones.  There is no reason for the device to stop at one layer of clothing.  Although Superman's costume is invulnerable, it is not impervious to X-rays, at least according to this cover: 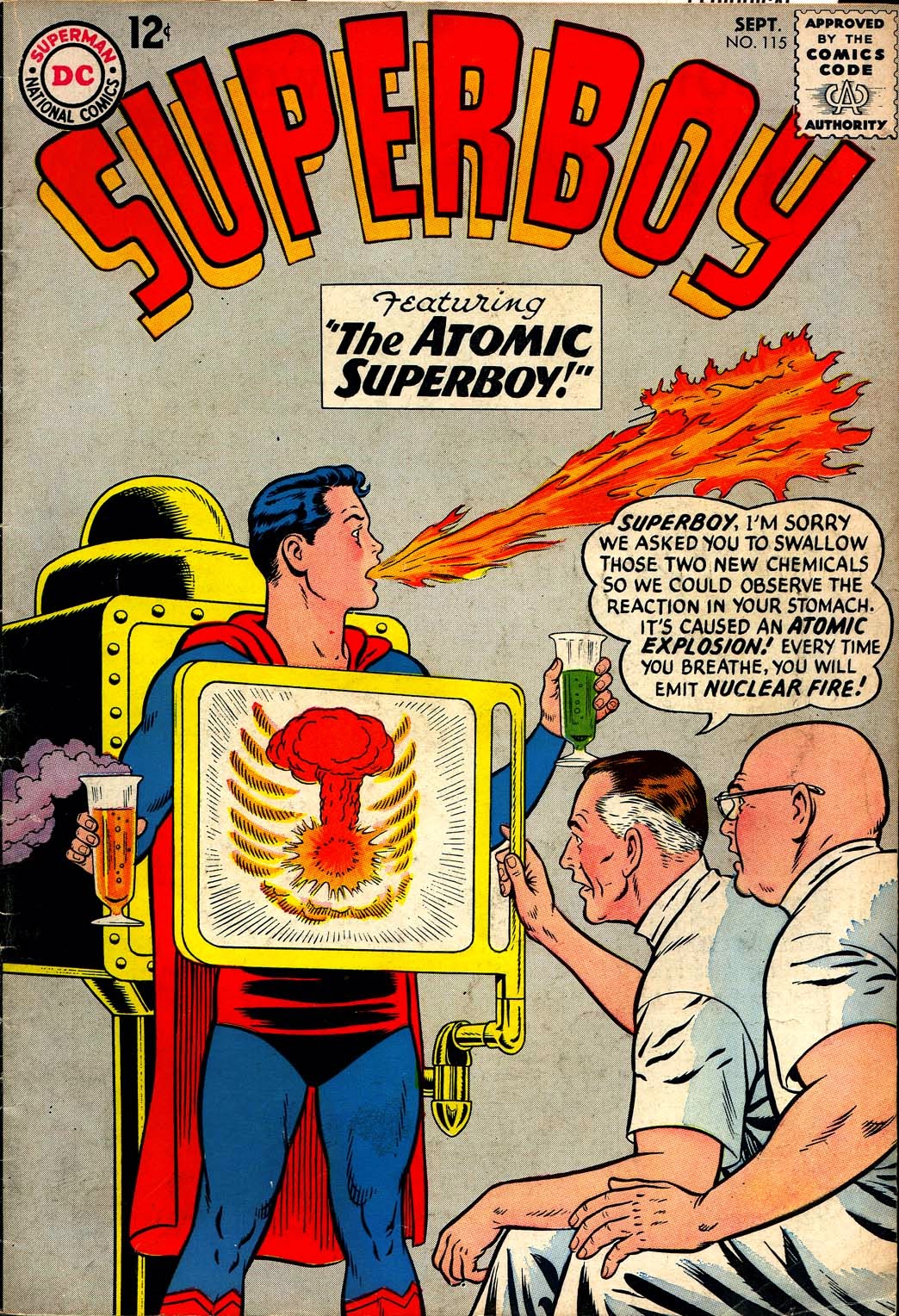 The two hand-held X-ray gadgets actually work pretty much like young boys hoped the X-ray specs advertised in the comics would.

The Superboy #60 story is the more interesting of the X-ray gadget stories.  When Superboy learns that a quiz show is intentionally stacking the deck against a young Smallville inventor, he helps the boy create some devices, including, ironically, the X-ray device that reveals his secret identity.  This appears to predate the public revelations about the quiz show scandals of the late 1950s.  I talked four years ago about an even earlier Batman story that exposed shenanigans in the genre.

In the Superboy story, the young inventor is eventually able to keep $30,000 (the amount he had accumulated before the Boy of Steel's intervention).  That would be a small fortune in those days, enough to purchase a house, car and a college education.

The Superman story is less interesting; it turns out that the bearded Clark Kent is actually from another dimension, where Superman was evil and had disposed of Clark.  But then we learn that it's all a trick to trap Superman in the other dimension.

By the way, in both stories, Clark is able to convince people that the actual device being used on him was actually just a projector which put the S emblem on his chest.
Posted by Pat at 12:04 PM 2 comments: