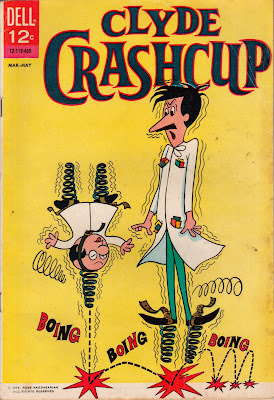 I don't even remember where I picked up this issue; it was probably a throw-in at some garage sale, or one of the collections I picked up at some point. I certainly never would have bought it individually, but.... It turns out to be pretty good. I remembered the name Clyde Crashcup as having something to do with 1960s cartoons, but not what the cartoons were about; if I'd had to guess I would have made the obvious assumption that he was a terrible auto-racer. It turns out that he was the backup feature on the Alvin and the Chipmunks show, and instead of being a driver, he's a madcap inventor. Of things that have already been invented: 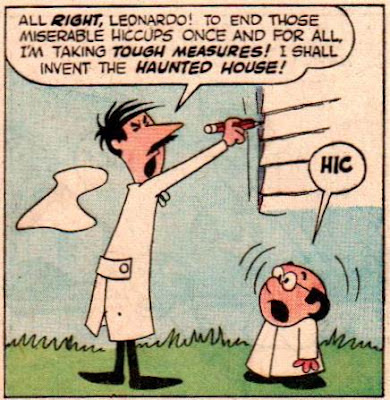 See, he'd just whip out his pencil and draw something and it would come to life. He also had a funny way of explaining the derivation of the name for his invention:

The formula for these stories is pretty simple; he invents something, but he and Leonardo, his (mostly) silent assistant, end up regretting it as it boomerangs on them: 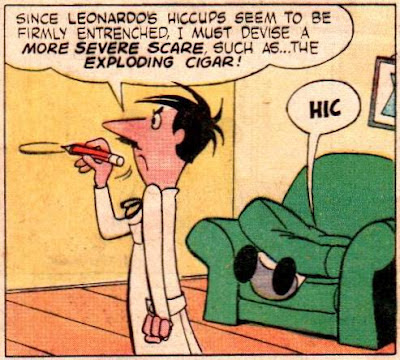 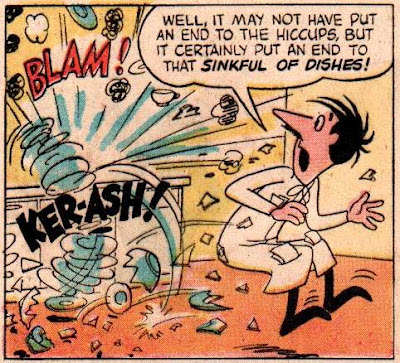 The artwork is quite good and the writing is way above average: 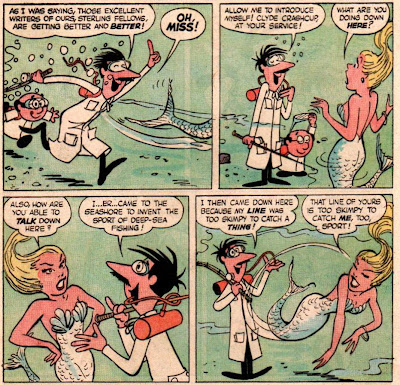 According to Toonopedia, there's a pretty good reason for that:


The comics are sought after by today's collectors, because all five were written and laid out by cartoonist John Stanley, whose work on Melvin Monster, O.G. Whiz and Little Lulu is considered classic.

Of course, I probably would have realized that if I'd looked hard at this panel: 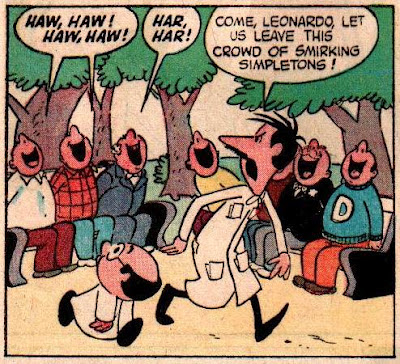 Update: Commenter rnigma points out that Crashcup's verbal style and appearance were based on the oldtime character actor Richard Haydn.  I don't remember Haydn myself, although obviously I did see several of the films he appears in (Please Don't Eat the Daisies and the Sound of Music).  Here's Haydn doing his schtick:

As you can hear by listening to this clip of Clyde Crashcup, it is obvious that he is indeed based on Haydn: Haydn seems to be one of those rare character actors who was hired to play himself in every movie he appeared in.
Posted by Pat at 11:35 PM 3 comments:

This is not my typical bailiwick, as I typically cover the Silver Age of Comic Books, and mostly don't cover comic strips.

Dick Tracy is one of the longest-running comic strips in American history.  He first appeared in 1931, and is still going strong some 81 years later.  Tracy is a police detective who solves cases by dint of dogged perseverance, occasional solid sleuthing, and incredible coincidences.

Dick has fought an oddball assortment of criminals and racketeers over the years, most of whom have some physical abnormality. Flattop had a flat head.  Pearshape was skinny on top, but obese below the waist.  BB Eyes had tiny eyes.

One of the most interesting things about the Dick Tracy series was its focus on chase scenes.  In almost every case, Tracy's first encounter with the villain does not end with the capture or death of that crook, but in an extended chase.  Tracy's antagonists were ingenious in their methods of escaping justice (temporarily).  For example, consider Mousey, a female shoplifter who specializes in releasing white rats in a store to distract the shopkeeper.  After stealing a mink, she finds Tracy on her tail.  What does she do? 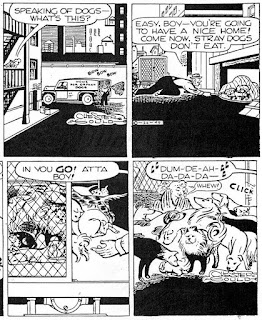 Yep, she hides in the dog-catcher's van, hidden under her stole.

The Tracy series was extraordinarily violent, especially compared to the books I normally review here.  Criminals often killed innocent bystanders, witnesses, and even their own spouses: 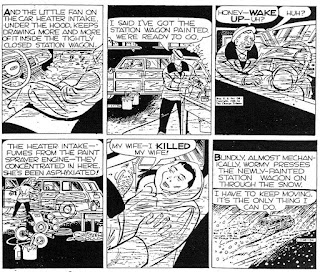 However, the series also had comic relief, generally provided by a hillbilly couple named B.O. Plenty  and Gravel Gertie, and their talented young daughter, Sparkle Plenty.  The series was not without its touching moments as well.  For example, on Christmas Day, 1949, it was announced that Dick had married his longtime girlfriend, Tess Trueheart: 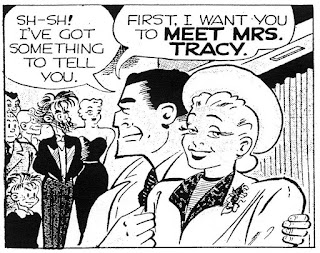 Almost a year later, B.O. Plenty stopped four bullets intended for Tracy, and seemed on death's door.  And there came this moving scene: 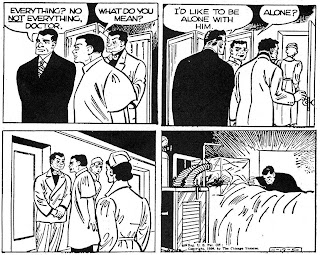 Tracy's prayers are answered, and B.O. rallies, although he remains in a coma.  Dick realizes that perhaps hearing his daughter, Sparkle, singing might bring him around:

The series also had a lot of high-tech (for its time) gadgetry, most notably, Tracy's two-way radio wristwatch (which later became a two-way TV).

I didn't read a lot of Dick Tracy in my youth.  My parents didn't get a paper with a Sunday funnies, so the only time I got to read the color comics was on our monthly visits to my grandparents.  And of course then it was almost impossible to keep up with a continuous strip like this, or Prince Valiant.  I do remember that he used to fly around in what looked like a garbage can, and there was some kind of race of people on the moon that he interacted with.  And of course there was the 1960s TV cartoon show, which pushed Dick to the sidelines in favor of a rotating crew of sidekicks, like Joe Jitsu (a martial arts expert) or Go-Go-Gomez.  The two-way radio functioned in the cartoons like the time-stopping watch.

Still, if you get the chance, I highly recommend reading the earlier years of the Dick Tracy strip.
Posted by Pat at 11:40 PM 8 comments:

How Fast Can Spiderman Travel? 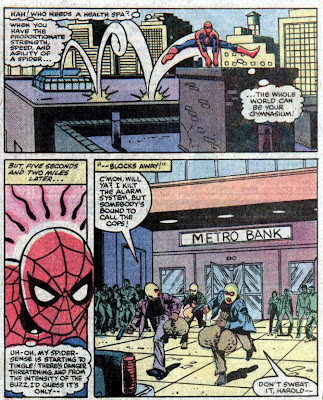 According to those panels, he covers 2 miles in five seconds, which works out to 1,440 miles per hour.
Posted by Pat at 8:31 AM 7 comments: