In the early 1960s, Marvel Comics had become something of a joke. They published a small line of magazines that mostly featured monsters with names like Fin Fang Foom or Shagg or Shamoo. But Stan Lee, the writer and editor for most of Marvel's stories noticed the superhero revival going on at DC Comics and decided to copy it. The first attempt was the Fantastic Four, a team title that was something of a knockoff of DC's Justice League of America.

The first issue told the origin of the team. The FF was made up of four characters who had travelled in a space ship to the radiation belt surrounding the Earth. The radiation caused strange mutations to the four. Reed Richards, the scientific genius leading the team, developed the power of stretchability, much like Plastic Man and the Elongated Man. Ben Grimm, a test pilot, turned into the super-strong (and super-ugly) Thing. Sue Storm, Reed's girlfriend, turned invisible, while Johnny Storm, her younger brother, burst into flame as the Human Torch.

The use of radiation as an origin device was new as far as I know, although Marvel would use it several more times in the next few years. Spider-Man, Daredevil and the Hulk would all see their powers result from exposure to radiation in one way or another.

The other novelty of the Fantastic Four was that the members were not "all for one and one for all". They bickered among themselves, especially Ben, who blamed Reed for his transformation into the homely Thing.
Posted by Pat at 8:47 PM 3 comments:

The Elongated Man first appeared in The Flash #112, April-May 1960. The Flash kept getting upstaged by this stretchable sleuth called the Elongated Man. Although EM had been a hero every time he appeared, the Flash wondered if he wasn't secretly behind a series of puzzling robberies. Who is the Elongated Man, and how did he come to be?

We are told in a flashback. Ralph Dibny had been an ordinary boy in the Midwest, when he was fascinated by an India-Rubber Man in the sideshow at a carnival. He vowed to learn how to stretch himself, but none of the carnies would tell him their secret. Then he remembered that all the stretching men had drunk a product called Gingold. By studying the product, he isolated the stretching ingredient. At first it didn't work on him, but then suddenly he began stretching wildly.

The Flash is suspicious of Dibny, but Ralph actually captures the thieves that had been ruining his good name, and they become friends. Of course, there had been stretchable detectives in the past, most notably Plastic Man, and there would be more before long--Elastic Lad and Mr Fantastic arrived in the next year or two.

The Elongated Man was created by Carmine Infantino. In his earliest appearances he wore a stretchable purple and blue suit with a domino mask. He appeared regularly in The Flash for the next couple years.

Things changed dramatically for the Elongated Man in 1964. DC had decided to fix the problem with Batman. There were two main problems: the art and the editing sucked. DC solved the first by adding Infantino to the Batman stable, while Julie Schwartz took over the editing chores.

The pot sweetener for Infantino was that the Elongated Man got his own feature in Detective Comics, starting with #327, the May 1964 issue. This was one of the very few times in the DC universe that a supporting character had graduated to his own feature; the prior ones that I can think of are Lois Lane, Alfred (briefly), Robin and Jimmy Olsen.

In Detective #327, Ralph Dibny and his new wife, Sue, were returning from their honeymoon in Canada. Ralph is now the "famous Elongated Man"; apparently the earliest superhero to maintain another identity, yet not keep it a secret. The Fantastic Four have an argument, but they never had secret identities, whereas Ralph clearly gave his up. Plus he's clearly one of the earliest superheroes to be married.

The pattern for the EM stories was established in that first appearance in Detective. Ralph and Sue are driving along, Ralph spots something suspicious and is off to investigate. The second story, in Detective #328, begins the tradition of Ralph's nose twitching when he scented a mystery:

The Elongated Man really hit the big time with Detective #331. For as long as Detective Comics had existed, it had always featured more than one story, and none of the other features had crossed over into Batman. But both those taboos were broken with "The Museum of Mixed-Up Men" in September 1964. Batman and the Elongated Man teamed up to defeat Boss Baron in a three-part adventure that consumed the entire issue. There was another crossover/full length story a year later in Detective #343's "The Secret War of the Phantom General". I don't believe there was another full-length story in Detective Comics after that until #500.

The next big change came at the end of Detective #350. Sue decided that her husband's costume was too boring, and gave him a new one, mostly red with black and yellow stripes. At about this time, the Batman TV show hit, and so the Elongated Man got read by a lot of people who otherwise would not have been reading a backup feature.

DC changed artists at Detective #357; Murphy Anderson and Sid Greene took over. Not sure what the story was there. For that issue only, Elongated Man's suit is primarily yellow. Perhaps a Reverse-Elongated Man? Or could the issue have been that the Silver Age Plastic Man comics DC had introduced made the uniforms too confusing?

The uniform changed again with Detective #359. Now it was purple with yellow and black. That was pretty much how it stayed for the rest of the run in Tec. Ironically the issue that finalized the uniform changes was also the one that doomed the Elongated Man's run in Detective, as it introduced the Barbara Gordon Batgirl. Elongated Man's last appearance in 'Tec was #383, so he appeared in 57 issues of Detective Comics. In Tec #384, Batgirl began an alternating feature with Robin.

I believe Elongated man next popped up in the Justice League of America during the mid-1970s.
Posted by Pat at 6:13 PM No comments:

I'm pretty sick of this theory myself, but this is one of the odder panels in the Batman series (from Batman #84, June 1954): 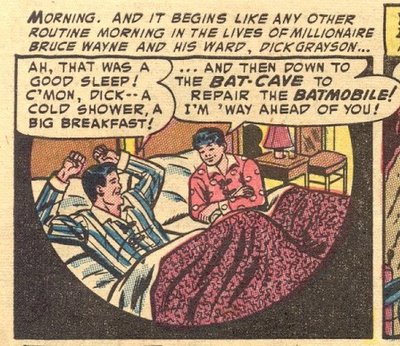 Actually it just looks like a poor job of art by Sheldon Moldoff; a later panel makes it clear they are not actually sharing a bed: 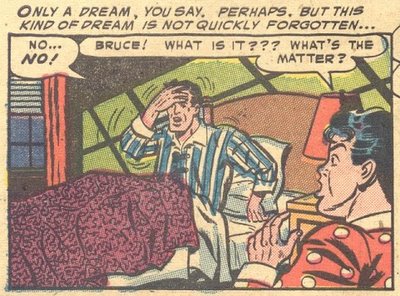 Now, you can make something out of the fact that they're sharing a room in Wayne Manor, but it's just a literary device to skip a few panels of Dick hearing Bruce's nightmares and coming down the hall.
Posted by Pat at 3:01 PM 1 comment: 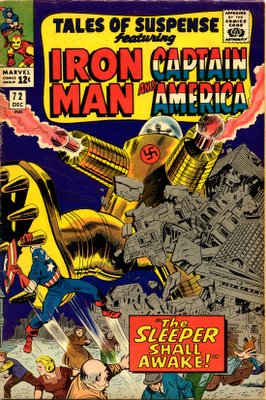 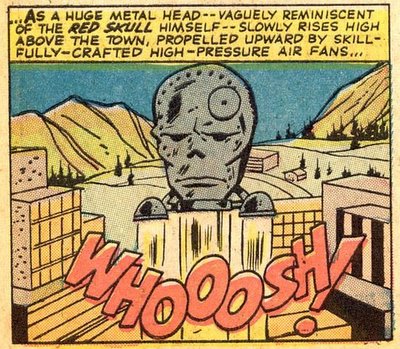 I believe there was another sleeper that came along later. The Red Skull would return before the end of the year, still alive despite his apparent death in ToS #72.
Posted by Pat at 3:42 PM No comments: