One of the continuing sagas in the Silver Age Superman was the Anti-Superman Gang.  Actually that's probably overstating things a bit; in reality they were just a convenient plot point for Weisinger and his writers.

The Anti-Superman Gang first appeared (as far as I can tell) in Jimmy Olsen #39, and in that story they're something of a sidelight to the main plot.  See, Jimmy is so obsessed with making sure that he doesn't lose his signal watch that he hides it someplace while sleepwalking, can't find it the next day, and wears a spare wristwatch.  Of course, he ends up having to signal Superman that day several times, and each time he has to come up with a creative means of doing so.  At least twice the Anti-Superman Gang tries to steal the (wrong) watch, and in the climax, Jimmy spots the leader of the group, Ace Manton, improbably hiding out at a drive-in movie theater.  Oh, and Jimmy finds his wristwatch hidden around his ankle.

The gang apparently didn;t give up after that, as they popped up in Lois Lane #13 a few months later.  Lois is wearing a blonde wig in an effort to get a photo of a movie star and his new bride, when two members of the gang spot her.  Hey, aside from that blonde hair, she's a dead ringer for Lois Lane and we can use her to get Superman.

Their next appearance was in Action #261.  Two visitors to the Fortress of Solitude (which has been transported to Metropolis as an attraction to raise funds for charity) are members of the gang planning to blow up Superman's HQ.  The plot is foiled in a typically convoluted fashion.  See, the Kandorians had been trying to radio Superman to warn him (they were in deadly danger themselves).  But a jewel in the fortress was interfering with the radio signals.  Fortunately, the crooks had brought one part of the bomb in a lead-lined container (so Superman couldn't see what was really inside) and when one of the crooks discarded the container it conveniently covered the jewel so the radio waves could get to Superman.

They try their luck against the Fortress of Solitude again in Lois Lane #21.  The plot again is absurdly convoluted.  An inventor comes up with a Lois Lane doll (possibly inspired by the Barbie phenomenon) that sells like hotcakes.  For the 10,000th doll, the inventor plans to make a life-sized Lois doll which will contain a nuclear bomb.  See, the inventor is a member of the Anti-Superman Gang, and he correctly reasons that Lois will give the doll to Superman for his memento collection at the Fortress.  I'd explain what goes wrong, but it's even more convoluted.  We do get to learn the gang's motto: 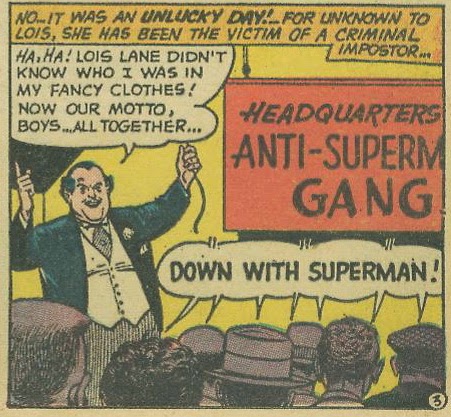 The gang returns in Action #276.  A wealthy philanthropist is dying and he summons Clark Kent to his deathbed.  He's a great admirer of Superman and believes that Clark is secretly the Man of Steel.  After checking the man's pulse (feeble), Clark figures what the heck and divulges that he is indeed Superman, doing a couple of super-feats to establish it convincingly.  A few moments later, the old man passes away.  But... it turns out that the wealthy philanthropist is secretly the head of the Anti-Superman gang, and had been inhaled a drug that briefly caused him to appear to be dying,  However, the doctor who had given him the drug warned that it might cause hallucinations, and becoming aware of the hoax, Superman sets up an elaborate plan to convince the gang boss that Clark's revelation was in fact a side effect of the drug.

There were quite a few more appearances of the Anti-Superman Gang--Superman #145 and #152, Jimmy Olsen #75, etc.  In Lois Lane #60 we learned the gang had a standing bounty out on Supes and his friends: 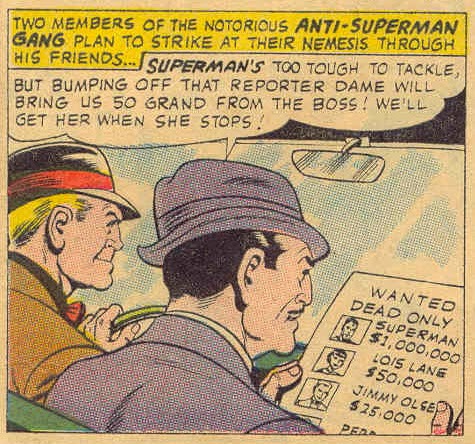 Jimmy only worth half as much as Lois?  But that's actually an increase over the amount offered a couple months earlier in Jimmy Olsen #85: 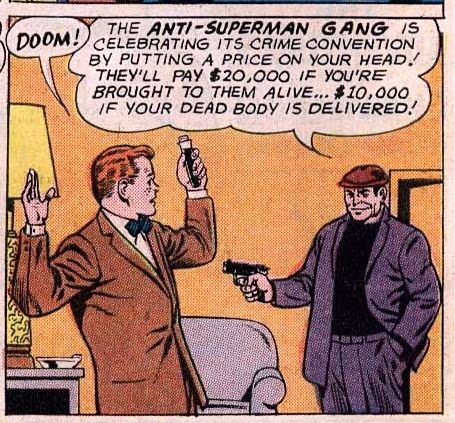 In Jimmy Olsen #87, we learned that the Anti-Superman Gang included some of his more famous foes: 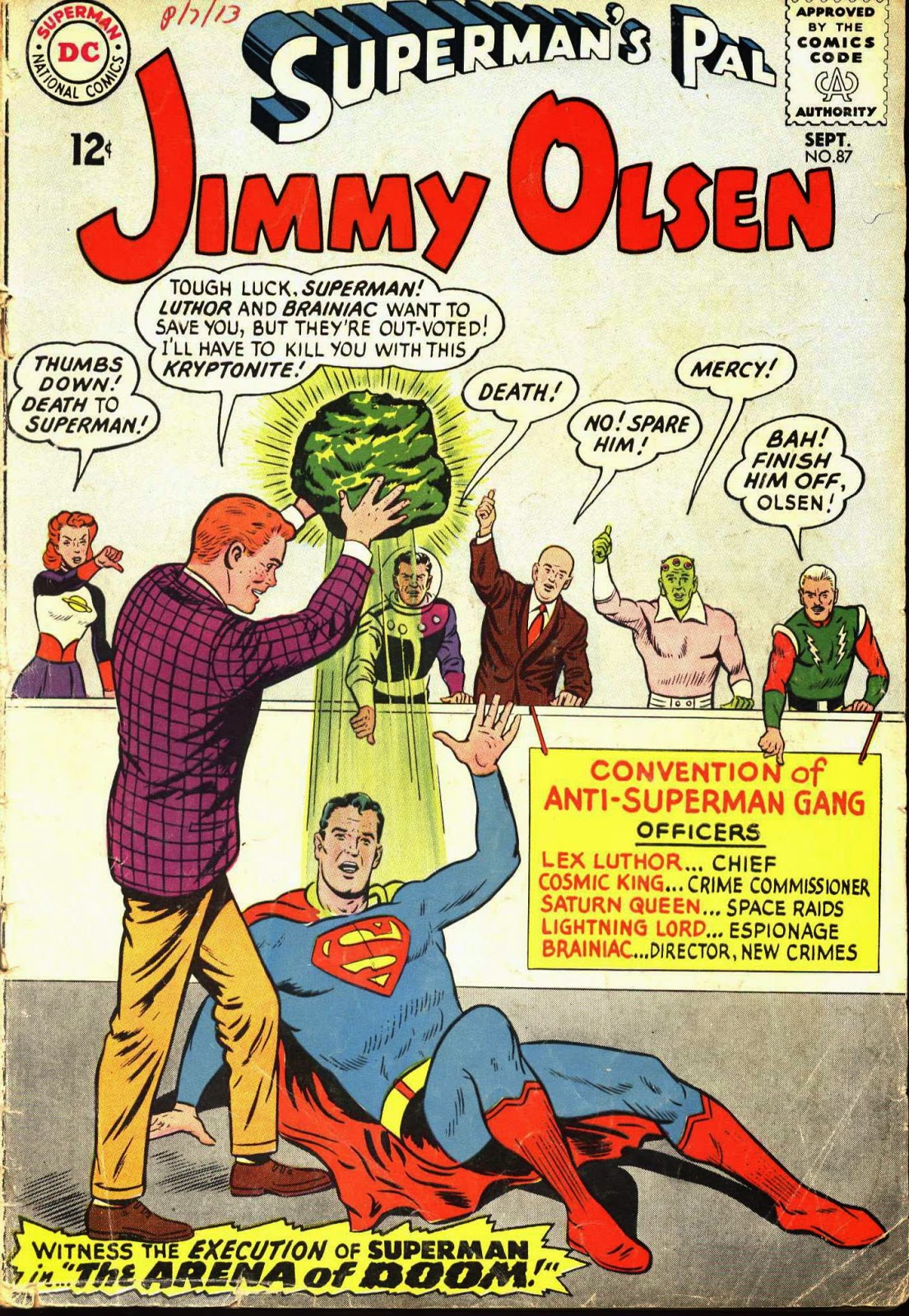 But aside from that story, the A-S G is made up of ordinary crooks.