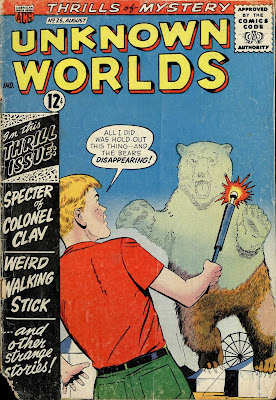 I've talked a little bit about American Comics Group, a small publisher that managed to put out about 1,150 comics from the late 1940s to the late 1960s. They put out comics in just about every genre, from teen to romance to funny animal to war. But their specialty was the kind of light fare that passed for horror in the Silver Age. Unknown Worlds was a late entrant for AGC in the horror field, coming on the heels of their long-running Adventures into the Unknown and Forbidden Worlds comics. I thought I would take a detailed look at one issue of Unknown Worlds from August 1963.

The opening story is entitled "The Specter of Colonel Clay". William Ames' family is forced to abandon their Oklahoma farm during the Depression. They decide rather than head to California like everybody else is doing, they'll go southeast. After an angry experience with a farmer who wants them to live in old slave quarters, they find an abandoned antebellum mansion which they hope to fix up and farm. But the mansion is haunted, and they are nearly killed a few times.

The young boy of the family manages to talk to the ghost, who had been a colonel in the Confederacy. The ghost is bitter at the Yankees who plundered his farm during Sherman's march through Georgia, and at the Southerners who refused to help him when he attacked in a suicidal raid, and determined to frighten away the Ames like he's frightened away other people who tried to live on his land. But this family is made of sterner stuff: 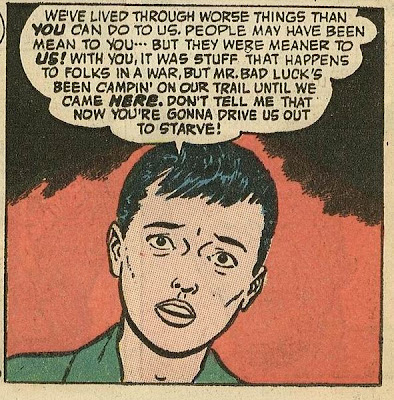 The colonel is of course unable to resist the little tyke's pleas, and they become friends and opponents across a checkerboard. He helps out the boy's dad when some young toughs decide to take over the farm, and in the end he realizes his hatred is misplaced and he joins the rest of his family, at peace in the cemetery.

The second story is "Gentle Brute". A husband and wife team of anthropologists come across a hidden valley where cavemen and dinosaurs live. They help a caveman, and in turn he saves them from a tyrannosaurus rex, teaching them that cavemen were capable of noble feelings.

The artwork on this story was by John Forte, at the time in the middle of his run on the Legion of Super Heroes.

"Tiny Mermaid" is a one-pager. A girl and a guy discover a mermaid in an seashell, but then a tidal wave washes over them so that they have no evidence.

In "Weird Walking Stick", a UFO is shot down in a cornfield. A hayseed manages to pull a strange, glowing stick out of the flying saucer. It has odd powers and seems to automatically do whatever its owner desires. However, it is stolen by a greedy carnival operator whose use ends up destroying the stick.
Posted by Pat at 8:18 PM