Weddings Bells Are Breaking Up That Old Gang of Mine...

Initially, almost all superheroes were single. This is quite common in fiction as it allows for additional storytelling elements like romance and physical attraction.

But the negatives of not being married became apparent when Dr Wertham published Seduction of the Innocent, with its implication of gay themes in Batman's relationship with Robin. So when the Silver Age started, many of the new DC heroes had longterm girlfriends. Ray Palmer had Jean Loring, Barry Allen had Iris West, Hal Jordan had Carol Ferris (more or less; she was mostly interested in Green Lantern). Hawkman and Hawkgirl broke new ground for the Silver Age; they were a married couple right from the beginning.

Aquaman did not have a girlfriend in his Silver Age debut, but he rectified that situation with Aquaman #11, when Mera debuted: 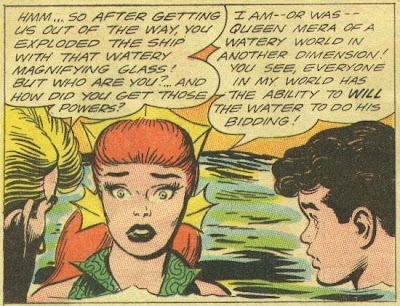 When she returns in Aquaman #13, the Sea Sleuth is not shy about expressing his feelings: 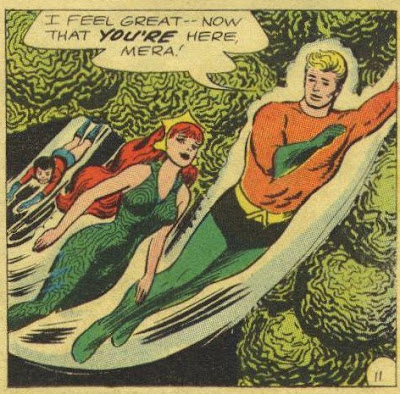 Nor is she timid about pushing matters forward a bit: 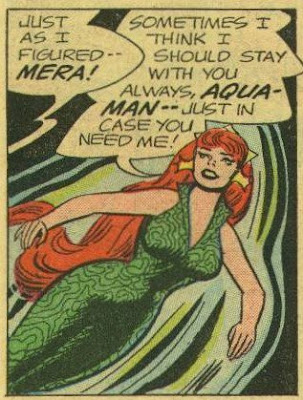 And for once there was no extended engagement: 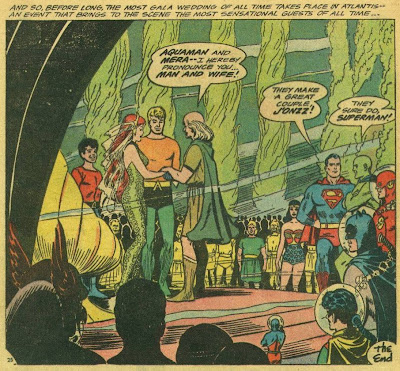 I believe that Aquaman and Mera were the first superhero couple to get married in a comic book; as noted earlier Hawkman and Hawkgirl were married when they first appeared in the Silver Age and the Elongated Man and Sue Dibney were married just prior to their appearance in Detective #327.

However, they were not the only couple to wed during the 1960s. Reed Richards and Sue Storm tied the knot in the pages of Fantastic Four Annual #3 (1965): 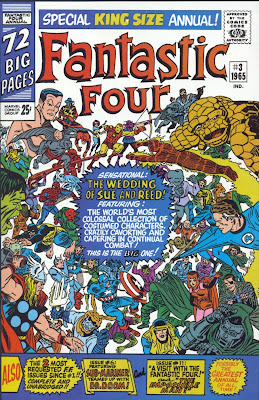 The final major wedding of the decade was announced rather tastefully: 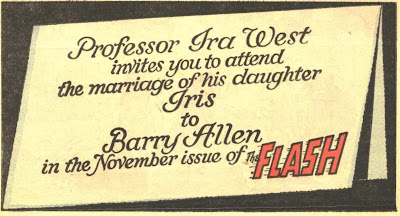 In two of the stories, there was a usurper to the groom. The Flash's mortal enemy, Professor Zoom attempted to marry Iris in Barry's place as shown here: 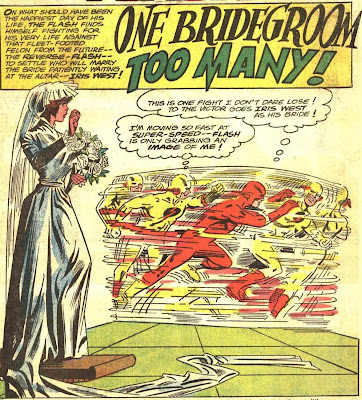 And in the Aquaman story, Oceanus kidnaps Mera and attempts to make her his bride. Oddly, there is no similar effort by the Submariner to prevent Sue Storm from marrying Reed Richards.

Why so many weddings in the mid-1960s after none before? I suspect that the comics writers were taking their cue from TV shows, which had discovered around the time that a marriage (and/or a new baby) gave sagging programs renewed ratings.

Update: Turns out there was another wedding which the baddies tried and failed to break up. 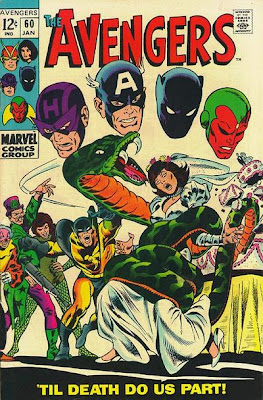 And there actually was one wedding that failed to come off due to the actions of the villains; in Hulk 124 Bruce Banner and Betty Ross were standing at the altar when the Leader's ray transformed Bruce back into the Hulk: 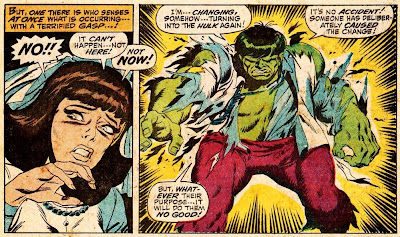