The Comics Code: Pros and Cons

Mark Engblom brings up the Comics Code, a very complex subject. The code comes up in the context of a letter to the editor in a Marvel Comic around 1974, and Roy Thomas' response that the CCA had arisen out of a legitimate problem.

More stunning stuff here. See, in all my years of collecting comics, it's been the accepted orthodoxy that everything about the Comics Code was toxic and repressive, and that the comics of the early 50's were exempt from moral scrutiny and social responsibility. Yet the editor acknowledges the excess and irresponsibility that lead to the Code's creation...a view I've long shared.

Comic books were originally not thought of as particularly aimed at kids; in fact if you look at some of the earliest efforts they commonly imitated the comics sections of the newspaper in that with a variety of stories and styles they intended to provide something for everyone.

But whereas the comics sections of papers could succeed with this diversity because they came with the daily paper and thus were "free", comics had to appeal to one person--the buyer who actually shelled out money for the issue, and that one person wanted specialized entertainment; hence Detective Comics and Planet Comics and Action Comics, etc.

So the comics became more specialized. The (sometimes graphic and gross) violence was there from the beginning. Check out this centerfold from Star Comics #5 (1937): 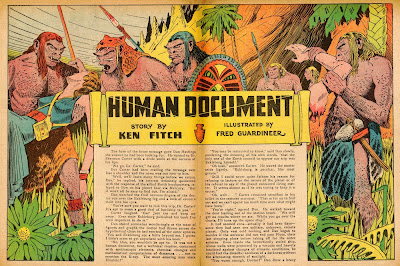 The sex... well, that changed quite a bit over the years. In general the Fiction House comics seemed designed to emphasize sex appeal, but it was mostly gals in bikinis in the jungle. Titillating back then but pretty tame by today's standards: 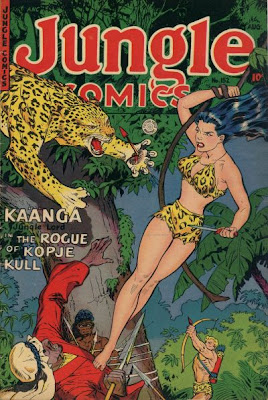 I agree that things got out of hand during the horror era, with genuinely gruesome stuff on the newsstands, although again I wonder who was reading it; probably mostly teens who could handle (and enjoyed harmlessly) the gross-out factor. But this was the part that could easily be demagogued with the claim, "This is what the kiddies are reading!"

The outside world intervened. In the early 1950s the problem of juvenile delinquency and gangs became a hot topic, and everybody was concerned as to why these problems had arisen and what could be done to reduce them in the future. My personal theory on this is pretty simple. Because of World War II, America had large numbers of young boys whose fathers were either absent for several years in their youth, or absent permanently (those who died in the war). This caused the problems later on down the road, just as absentee fathers in the 1970s can be blamed for gangs returning with a vengeance in the 1980s.

But at the time that may not have been obvious, and as a result, there was a rush to look at other recent changes. And there is no denying that comics (especially the EC line) had been pushing the boundaries on horror and violence (and selling phenomenally well). Enter Dr. Wertham and the CCA, stage right. Exit EC, Fiction House and Lev Gleason, stage left.

By the way, the aspect of Dr Wertham that is commonly forgotten is that he marketed himself as an expert witness for the defense in the murder trials of juvenile killers in an attempt to get them off on the "only a lad whose mind was ruined by comic books" defense. That's right, you can argue he was a "root-causes" liberal as easily as you can argue he was a bluenose conservative.

If the CCA had simply been a symbol parents could trust and demand that their younger children not buy anything without that label, I would have no trouble saying it was a good thing. That it became a de facto bar to the distribution and sale of comics that had entertained teenagers and adults, like the EC line, makes it harder. The comparison to today's video games and their ratings could not be more obvious.

And I do note that when Marvel (remember, this came up in a Marvel letter column) experimented with more adult fare with Savage Tales #1 (in 1971), what were the adult aspects? Nudity, sexuality and violence. Marvel definitely pushed the envelope on the nudity; check out the Black Widow stories in Amazing Adventures, which regularly featured her showering or changing into her costume and giving us provocative glimpses of her anatomy that were not noticeably crucial to the plot.

Now all that said, I acknowledge that the effective abandonment of the code around 1971 (which makes it odd that it would be discussed so earnestly in 1974) was the beginning of some of the problems that I see today with comics: the sexist imagery of women and the abandonment of any moral center. Nowadays, "heroes" can be alcoholics, two-timers and wife-beaters; that would have never happened with the code in force.
Posted by Pat at 11:00 AM