There's A Man Who Leads a Life of Danger 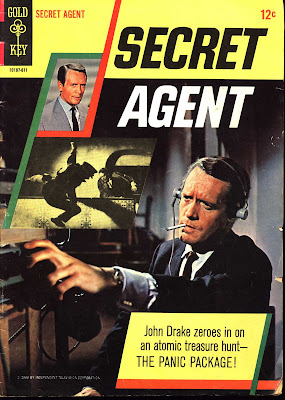 One of the great theme songs of all time. With the death of Patrick McGoohan it seems like a perfect time to cover Secret Agent #1, which arrived in the comics stores in 1966, at the absolute height of the spy boom of the 1960s.

The story starts out with an Air Force bomber in trouble in the tropics. The pilot jettisons "the package", aka a hydrogen bomb before crash-landing the plane. John Drake is assigned to cover the pilot, who was severely injured and find out where the bomb was dropped. As was common, the gadgets are featured: 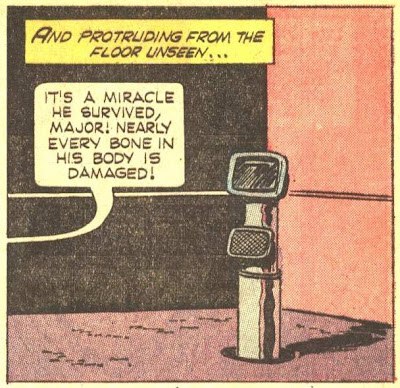 But the pilot dies without revealing his secrets and so Drake must join a safari which is going near where the plane must have jettisoned the bomb. He meets a beautiful woman and a Russian named Gahanna who is clearly the heavy. Here's one of those classic "Who's gonna do it?" panels:

Scheer quickly gets himself killed, and Gahanna was with Drake when it happens, so it is obvious that there is another villain on the safari. Mr Igor is the next to bite the dust, and we learn that Filmore is a former atomic scientist who's opposed to nuclear weapons. So when Professor Fathershun is killed, that leaves us with two options: Either Jan Lovelace is the villain or Filmore is not so "former".

When they find the bomb, Filmore reveals that he's really just a no-nukes kook: 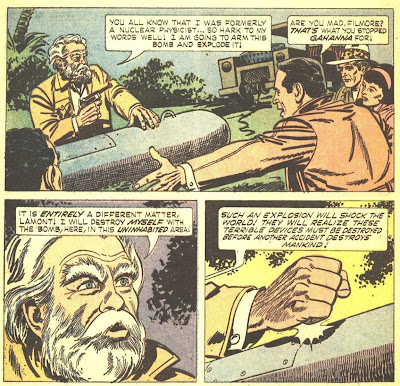 But Drake manages to disarm him and foil the plan. It turns out that Scheer was a former Nazi and Igor (apparently) a former concentration camp victim, so Igor killed Scheer and then Gahanna killed the others. Drake holds the bomb until the authorities can come and move it to safety.

Comments: Although I was not a big fan of the Gold Key line, I have to confess that this is a pretty well-executed story. The art is acceptable if never soaring, but the plot is intricate and realistic; indeed so realistic that I can't help but wonder if it was based on an actual episode of the TV show. One thing is conspicuously missing, and that is the resolution of the hinted attraction between Drake and Jan Lovelace; they didn't leave those parts out of the James Bond movies of the time.

Gorilla Daze has some Kirby Prisoner. The Prisoner was, of course, McGoohan's other famed series in the US; although it lasted only about 13 episodes it is indeed a classic of paranoia.

The Fortress Keeper has more, including the video of the intro to the Prisoner.

Update: Booksteve points out a possible reason for the unconsummated relationship between Drake and Lovelace.

New York born but veddy British nonetheless, he was reportedly in the running to have been the original James Bond but his refusal to kiss women onscreen--virtually unheard of--would have kept that from happening.