The Great Editors of the Silver Age: Julius Schwartz 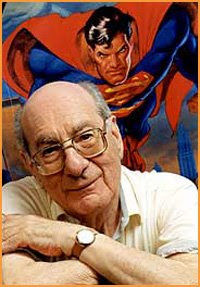 Much of what we consider today to be the DC Silver Age was developed under the watchful eye of Julius Schwartz. Schwartz was an influential science fiction fan, creating an early (1932) fanzine called Time Traveller, with two friends, Forrest Ackerman and Mort Weisinger.

By the early 1940s, Schwartz had landed at All-American Comics, which at that time was still separately owned by William Gaines. Schwartz was an assistant editor for the Golden Age Flash, Green Lantern, Wonder Woman, Sensation Comics and All Star Comics. When All-American merged with DC, Schwartz retained most of his assistant editor titles, although eventually most of the All-American titles folded. Schwartz was made the full editor of Wonder Woman, which I believe was the only AA title to survive into the 1960s (although he did not last that long as editor of that mag).

When DC decided to branch out into science fiction in the early 1950s, Schwartz was the natural choice to edit the new mags, starting with Strange Adventures in 1950 and Mystery in Space in 1951. Schwartz had extensive contacts in the science fiction industry, having also served as an agent to several sci-fi writers before moving over to the comics biz. (Note: Whitney Ellsworth was listed as the editor of most DC magazines in the 1950s including SA and MIS, but Schwartz did the work.)

In 1956, DC decided to launch a tryout magazine for new features, called Showcase. Unlike most titles, Showcase had a rotating editorship, with each separate feature under a different editor. The first three issues of Showcase were nothing special, but with #4, DC struck gold. Schwartz, Bob Kanigher, and Carmine Infantino collaborated to bring back an updated (Barry Allen) version of the Flash.

Schwartz also worked on the Adam Strange launch (and picked up the character for his Mystery in Space title). With Showcase #22, Schwartz brought back his second Golden Age hero for DC in the form of the Hal Jordan Green Lantern. In Brave & Bold #28, Schwartz combined the new Flash and Green Lantern with existing heroes Wonder Woman, Aquaman and the Martian Manhunter to form the Justice League of America. In this endeavor, Schwartz was greatly encouraged by the letters of Dr Jerry Bails, a huge fan of the Golden Age Justice Society of America.

Over the next few years, Schwartz helped relaunch new versions of the Atom and Hawkman. In 1964, he was given control of DC's second-most famous character at the time, Batman. Although I remain unimpressed with the "New Look Batman", Schwartz did get rid of some of the cheesier science fiction elements that had plagued the character under prior editor Jack Schiff, and there is no denying that he made a major (and terrific) revamp of the character after the collapse of the Batman TV show.

Schwartz was an unusual editor in that he "got" fandom. After all, that was how he himself got his start. When Roy Thomas and Dr Jerry Bails approached him about their fanzine for comics (the original Alter Ego), Schwartz not only provided helpful advice from his own fanzine experience years earlier, but gave them a plug in the letters pages of JLA. To encourage quality letters in his own magazines, Schwartz began giving away original artwork to the best writers.

Schwartz was a great editor, consistently turning out quality entertainment through into the 1980s, eventually taking over the reins of Superman from his childhood buddy Mort Weisinger. And by all accounts, Schwartz was an even finer human being; I don't think I've ever heard anybody who had a negative thing to say about him.
Posted by Pat at 8:18 AM