I won a trivia quiz over at Golden Age Comics, and as a result, I received two delightful comics calenders that would look great on your office or living room wall. The calendars are published by Asgard Press, where their motto is "Old School is Now in Session". As you can see at that site, they publish an astonishing array of calendars, including just about every college football team, Mad Magazine, and Pulp Sci-Fi.

The two comic calendars are DC Comics and Marvel Comics, with the DC edition spanning from the Golden to the Silver Age, while the Marvel Comics calendar is mostly drawn from the 1960s. Here's the cover of the DC calendar: 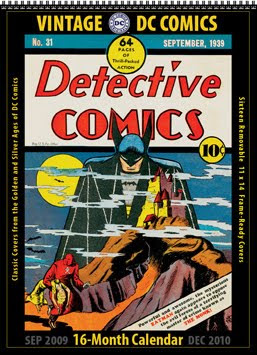 As you can see, the colors are bright and sharp, and the black background really makes them pop out at you. The DC Edition contains the following covers:

The Marvel calendar has the following covers:

The calendars also come with a brief history of each company, with Bill Jourdain himself doing the DC, while the Marvel calendar is introduced by Dr Arnold T. Blumberg. They also contribute a capsule discussion of each cover on the monthly pages.

The colors are beautiful and extremely realistic. The World's Fair Comics cover has some discoloring (looks like dirt on the cover), which I actually appreciate; this is almost a 70-year-old comic. It shows that Asgard Press did not do a lot of photoshop work to make the covers look better than they are; rather they found very nice specimens of each cover and reproduced them exactly.

Update: Peter Shin, the publisher, stops by in the comments section and says that while they did do some restoration to the covers, they tried to maintain the balance between fixing problems and presenting something that wasn't there in the original. I do have to say, they did a wonderful job!

About the only criticism I have is the inclusion of the Captain Marvel Adventures cover as a DC mag; of course that is only true retroactively, after DC acquired the character around 1970. But that quibble aside, these are beautiful calendars that would make a handsome addition to your wall. The individual covers can also be detached from the calendar and framed. If you are interested in buying, Bill Jourdain mentioned a promo code in this podcast that will give you a break on the price. Highly recommended!

Update: Bill has further details (and that promo code) here.
Posted by Pat at 5:25 AM