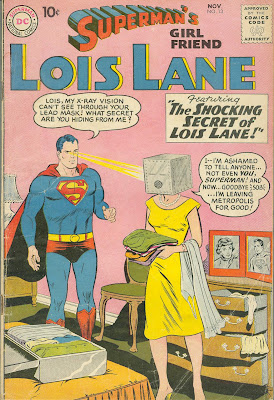 This is a classic example of Weisinger's puzzle covers. The idea was to present a startling situation on the cover, with the hope that the kids would be compelled to pick up the comic and leaf through it to find out what shocking secret had compelled Lois to wear a lead mask. Weisinger knew through focus-group type studies that he had done that kids who actually picked up a comic and flipped through it were much more likely to purchase that actual issue, and thus his goal was to get them to grab the issue off the spinner rack.

The first story features a visit to Lois' hometown of Pittsdale. The local newspaper, where she got her start as a reporter, is celebrating its 100th anniversary. Perry kindly gives her the weekend off, but when she checks for a flight, she finds that the Metropolis Airport is all fogged in. Fortunately Superman takes pity on her and flies her back to Pittsdale. He agrees to stay the weekend: 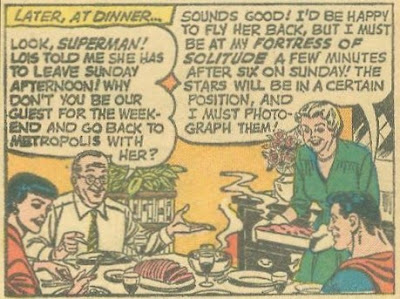 Pop Lane realizes what a great son-in-law Superman would make when the Man of Steel helps out with some of the chores:

But when he pitches the idea, Superman demurs with the usual, "She'd make a wonderful wife, but my enemies would attack me through her," line. Unfortunately, a local snoop heard only the first part of the conversation and the rumor that Superman and Lois are getting married spreads like wildfire. And, as must happen in all comedies, it is decided that it would be too embarrassing to admit the truth, and thus they pretend to be ready to go through with it. Lois gets a visit from a former beau: 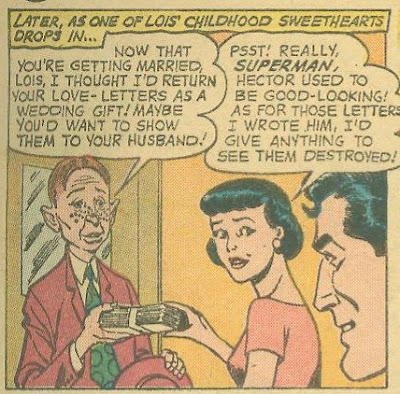 Yes, I am sure that Hector was once a hunk, before he started wearing the Joker's outfit. Pop Lane is generous to a fault: 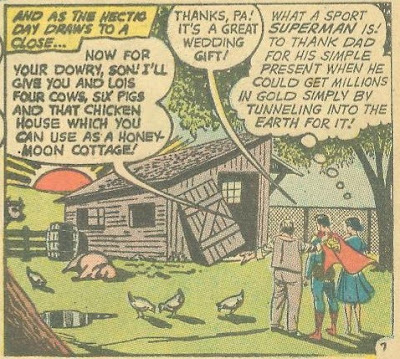 But just as it looks like the wedding is inevitable: 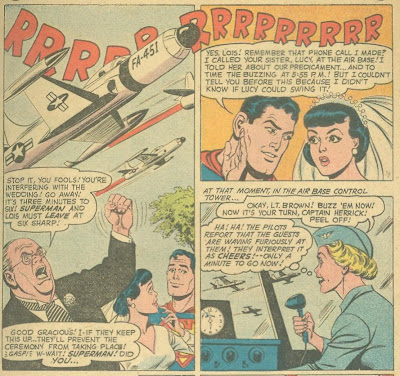 Remember, Superman had to leave at six to photograph those stars, so the wedding has to be called off until the next time they're back in Pittsdale.

Comments: An extremely silly, slapstick story, that mines a lot of the same ground used for the rural comedies at CBS (Andy Griffith, Green Acres, Petticoat Junction) in the 1960s, although this November 1959 issue actually predates those shows.

Next up is Alias Lois Lane. Lois visits a western US town with the intent of getting a photograph of a TV star who's on his honeymoon. She dyes her hair blond to disguise herself, but a couple of crooks realize she's the spitting image of the famed girl reporter; 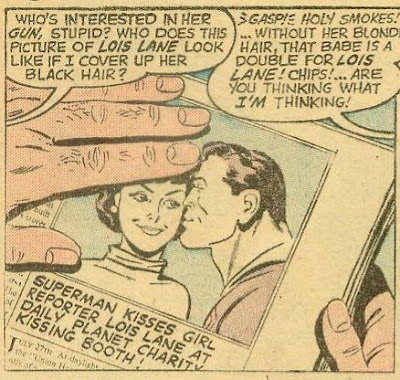 They blackmail her into helping them out (although she really goes along with their plot to get a scoop). Of course, they want her to imitate Lois Lane, but while her appearance is successful, she's nowhere near as smart or sophisticated as the genuine article: 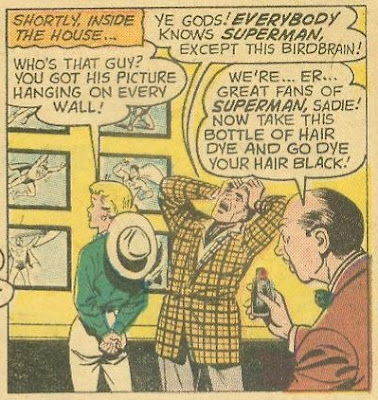 But through effort, they teach her to recognize Lois' friends and to mimic her voice: 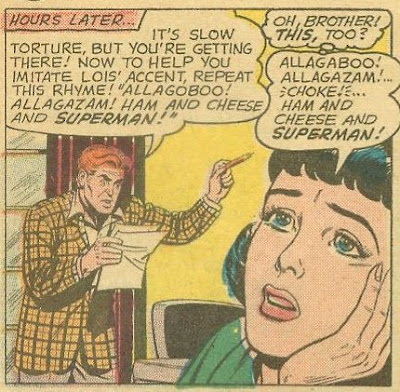 Hmmm, anybody hearing echoes of, "The rain in Spain falls mainly on the plain,"?

But she enjoys ticking them off by getting things wrong, to the point where they're ready to give up hope. But then she manages to get saved by Superman: 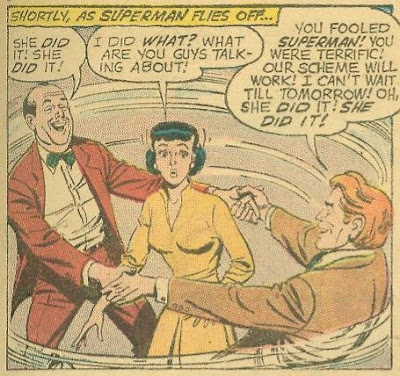 Yep, it seems pretty obvious that an inspiration for this story was My Fair Lady, as one of the key songs in that Broadway play (and later movie) was "She Did It!" at any rate, the crooks now reveal their plot; they will have Lois photograph Superman with a special camera that contains Kryptonite, letting them steal a valuable mouse. Mouse? Superman explains: 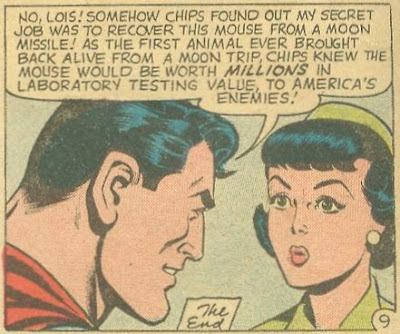 As I have discussed before, animals being shot into space was a hot topic around then.

Comments: Cute take-off on the My Fair Lady theme. One interesting note: In both this story and the previous one, the pretext for the initial situation gets ignored the moment the real plot is introduced. Remember, Lois went back to Pittsdale for the 100th anniversary of her newspaper, but that never comes up once they get to the Lane family farm. Ditto with this tale, in which Lois never gets the photograph of the TV star and his blushing bride.

The finale is the cover tale, and it reveals the downside of puzzle covers; the story they represent is often wacky and filled with incredible coincidences. So it is with this tale, which starts out with Superman saving Lois and expressing exasperation with her curious nature: 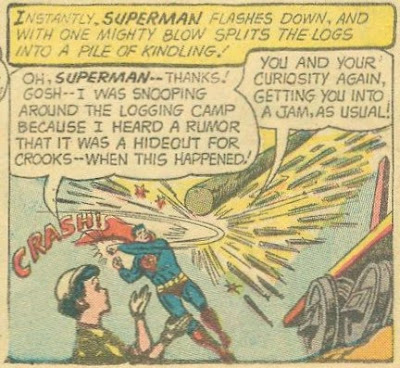 The next day he spots her car crashed into a tree and rushes to the Daily Planet to see if she's okay: 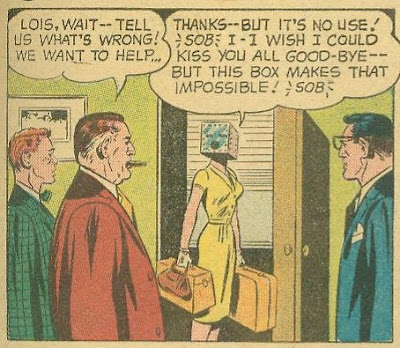 He suspects that she was badly disfigured in the car crash, but that turns out to be wrong. Instead, Lois had attended a nightclub the evening before, where she watched a magic act: 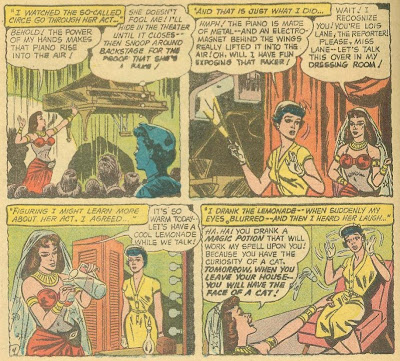 And sure enough the first two people who see Lois the next day react oddly. When she looks into a lake: 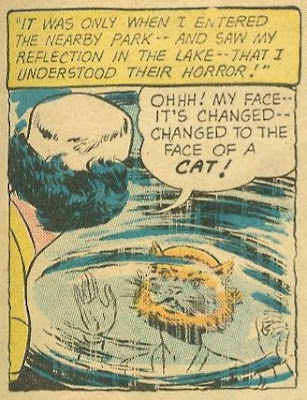 She wraps herself in bandages, but realize this will not conceal her from Superman, so eventually she gets a welder to fashion the lead mask. Yet when Superman later removes the mask, it turns out her face is perfectly normal; all the magician had done was to plant a hypnotic suggestion in her mind that she would look like a cat the next day. But what about the people who reacted so strangely to her? 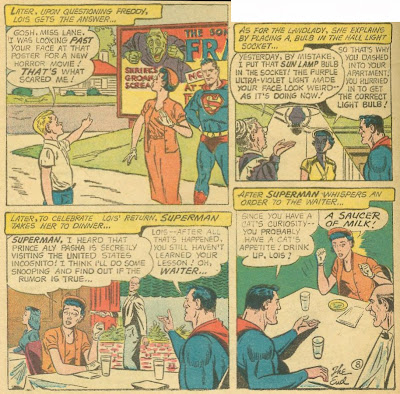 Comments: Clearly one of those stories where Weisinger came up with the cover idea and then assigned his writer the chore of creating a story where it happened. Incidentally, Lois got the head of a cat in another story appearing in Jimmy Olsen #66 a few years later.
Posted by Pat at 11:32 AM

I miss this kind of cover. Also, I always find it fascinating how apparently easy it was to obtain lead containers in the 1950's and 60's.

I have to say it - poor Hector. Granted, it's a little creepy to return love letters to a woman so she can read them with her husband-to-be, but did she have to make fun of his ugliness RIGHT IN FRONT OF HIM? Sheesh. With those big ears I'm sure he can hear her.

It gets worse, BIM; in the next panel she hands the letters to Superman and he incinerates them with the heat of his x-ray vision. :)

That scene with Hector is hilarious. I love the idea that you would give an ex-girlfriend old love letters as a wedding gift. Maybe I should try that one.

Anonymous said...
This comment has been removed by a blog administrator.
12:06 AM