The Short Life of Mike Murdock

One of the more bizarre sagas from Marvel in the 1960s concerned Matt (Daredevil) Murdock's "twin brother", Mike. As I have discussed in the past, most superheroes are also only children, and as it happens, Matt is no exception to that trend.

The story begins in Daredevil #16. DD's enemy, the Masked Marauder, comes up with a novel idea on how to tie up two superheroes at once. He creates an army of Daredevil knockoffs and instructs them to attack Spiderman, who recently foiled one of his schemes. After the initial attack, they are to fade away, leaving the wall-crawler angry and frustrated.

The plan works to perfection. When Spidey encounters the real Daredevil, he lashes out angrily. While they are battling, the Masked Marauder pulls of a spectacular robbery. This convinces each hero that the other was in cahoots with the MM. By a bit of coincidence, Spiderman happens to be swinging by the law offices of Nelson and Murdock awhile later, and his spider-sense alerts him to the presence of Daredevil. He makes the obvious deduction that DD cannot be a blind man, and thus accuses Foggy:

Matt and Karen eventually convince Peter of the error he's made. In the following issue, DD and Spidey team up to defeat the Masked Marauder. A few issues later, Peter sends a letter to Matt Murdock, revealing that he knows that Matt is really Daredevil, but not to worry, he won't disclose the secret to anyone. Unfortunately, Matt disappears shortly afterward and Karen remembers a special delivery letter and: 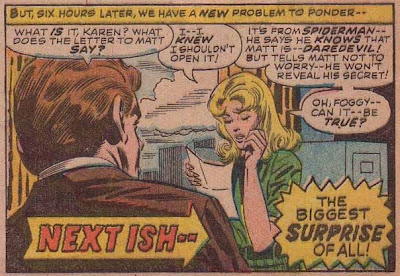 This sets the stage. In DD #25, Karen and Foggy confront Matt with the letter: 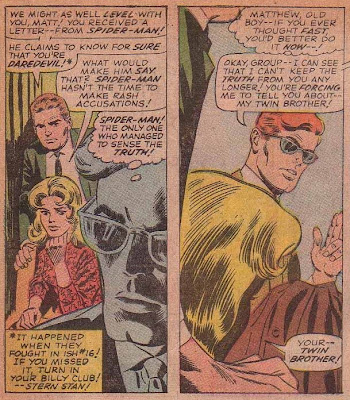 Of course, Foggy points out the obvious: that he roomed with Matt at college and never heard anything about a twin brother. So Matt prevaricates some more and Karen says what does it matter now that Matt's back, but Foggy still wants to meet this mysterious sibling and so: 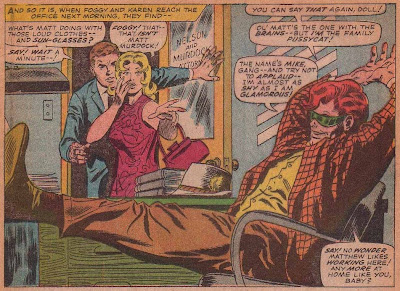 And for the next year and a half, Mike became a regular character in the DD universe. It's an insane plot twist but Stan manages to pull it off with some credibility because a) he acknowledges that it's crazy and b) Daredevil's abilities mean that he's able to pass Mike off as a sighted person despite being blind.

It's safe to say that most adult readers today find the storyline unbelievable and a low point. However, I remember reading these issues as a young teen and enjoying the heck out of them. Mike was the opposite of Matt in every way; confident where Matt was tentative, arrogant instead of sensitive and relishing letting Foggy and Karen know he was Daredevil. He flirts outrageously with Karen and teases Foggy abut his weight. What teenaged boy wouldn't want to try being a new person, confident and breezy, especially with the understanding that he could always go back to being the meek and mild-mannered guy if things didn't work out?

Again this is not to deny how ridiculous the stories are. Because Matt and Mike couldn't appear together, Matt was forced to rely on a series of increasingly implausible ruses to keep the imposture going: 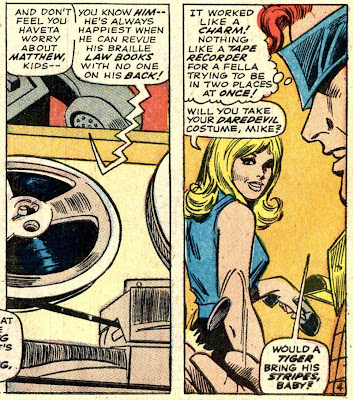 And he apparently enjoyed being Mike so much that he began to get some decidedly weird ideas: 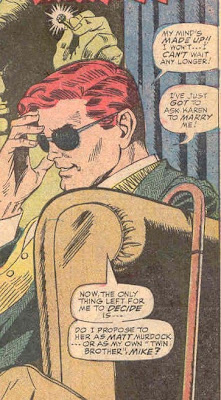 For a lawyer, Matt doesn't think things through very carefully.

In Daredevil #41, Mike (as Daredevil) is "killed" while destroying a machine that moves people into another time dimension. Is this the end of the superhero as well? Umm, no, as Matt tells the Jester (plus Foggy and Karen) in the next issue: 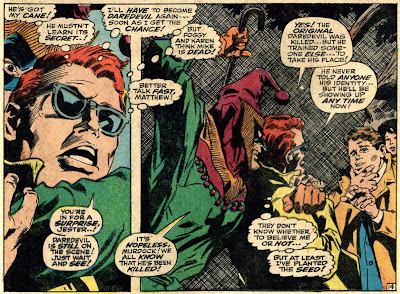 Blog into Mystery covers one of the early Mike Murdock stories here. There were two oddities that I noticed while reading the stories in this run:

2. The villains often attempted to blind (temporarily or otherwise) DD. The Masked Marauder hits him with an "Opti-Ray" blast that had briefly blinded Spiderman. The Gladiator threw sand in Daredevil's face in #23. The alien invaders in #28 use a "sight-stealing ray". The Cobra and Mr Hyde actually succeed in eliminating DD's extra senses with a potion intended to blind him in #30-32. And Dr. Doom's hynoticon in #37 fails precisely because ol' Horn-Head is sightless (just as the Ringmaster's hat was unable to hypnotize him in Amazing Spiderman #16).

I was glad to see you post this one, Pat. I had wanted to do a column of my own on the Matt/Mike Murdock plotline. It's one of the rare Marvel sub-series, and those are tough to find. (DC lends itself much more to on-going sub-sets.)

Unfortunately, while I had read those stories as a kid, I no longer possessed those issues (a casualty of my youth). And without them to reference for details, I couldn't write anything on it.

But I'm glad you did. First, it was fun reading about it all over, again. And, second, I now have a place to go to for the details if I ever get asked about it.

Nice to get some detail on this, I remember references to it I believe in Baby Boomer Comics.

great post, love the Mike Murdock stories. I agree that they might seem ridiculous now, but I also loved them as a kid!!

I always knew Daredevil was crazy - and this event was the proof!

It was indeed stupid and crazy, but it was a nice twist on the secret identity thing - where instead of just two identities, try juggling three!

It just made it, when he was finally outed as Daredevil, all the more humorous, because he put such gosh-darn effort into protecting that secret identity.

With art by the great Gene Colan.

I'm glad I found this blog, I really appreciate your view on comics.

I grew up with these stories as well and enjoyed the absurdities. the most bizarre idea was when Matt/Mike disguised himself as Thor, wearing his DD costume underneath! Man, did this guy have psycological problems or what??