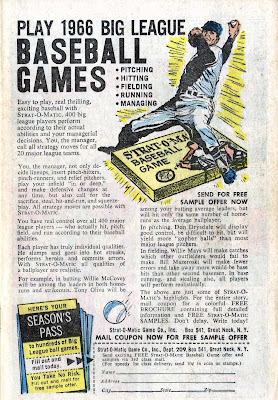 Before there was fantasy baseball, there was Strat-O-Matic. Their ads were a fixture in the Silver Age. And, as it happens, their product was one of the very few that I ever bought based on the comics ads.

The game was relatively simple, and nine innings could be played in a half hour or so, making it a perfect little time-waster. You had cards for each individual player.

You rolled three dice, a small blue one which determined whether you read from the batters card (1-3) or the pitcher's card (4-6). The two white dice were combined and you read down on the applicable card to see the result.

Here are a batter's and pitcher's card from the 1969 set: 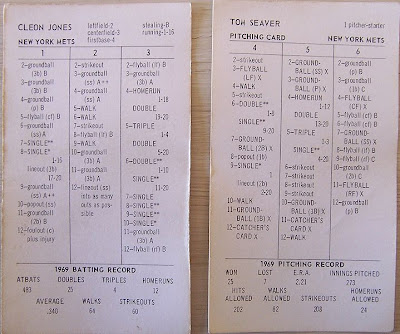 As you can see, a 3-7 there would be a single (read from Cleon Jones' card), while a 4-8 would be a popup to the first baseman (read from Tom Seaver's card). Some additional refinement came from results like 3-4, where you see the notation HOMERUN 1-12, DOUBLE 13-20. There was a deck of cards numbered 1-20 included with the game and you had to pull one when you got a result like that. Some of the results also relied on the defensive ratings of the players in the field. For even more realism, the backs of the cards could be used to play a game with platoon advantages, where left-handed hitters would hit better against righty pitchers and vice-versa.

I bought the 1978 season, and when the set of cards arrived my friend Bob and I sat down to replay the 163rd game of the American League, the playoff game between the Yankees and the Red Sox. The game was famed for Bucky Dent's improbable three-run homer into the left field screen as the Bronx Bombers went on to the World Series. But in the replay, it was Dwight Evans who went yard in the bottom of the ninth to bring the Bosox the AL East title.

It was a very cool game, and as it happens, the Strat-O-Matic company is still in business, celebrating its 50th anniversary. Obviously in the digital age, sales of the cards are down, but they have a computerized version of the game.

While we're on the topic of baseball simulations, I have two more memories to share. Back around 1964, my dad bought a similar game where you used spinners and had pieces of paper with the player's names and possible outcomes that you actually fit over the spinner. Anybody remember that game? I loved it. Update: Here it is:


Another baseball simulation I enjoyed was Micro League Baseball for the Commodore 64. It was another game where you solely controlled the management decisions--whether to steal, pull the infield in, issue an intentional walk, etc.,) and the players performed according to their statistics. The game included a lot of the famous teams of baseball history, including the Murderer's Row Yankees of 1927 and the Big Red Machine of 1976. But the team I enjoyed managing was the Washington Senators of 1955, a pathetic outfit that finished last in the American League that year. The thing was that you could actually put together a pretty decent lineup with that team. They had Mickey Vernon, a .300 hitter at first base, Eddie Yost who walked nearly 100 times that season, Roy Sievers to slug the ball out of the park, and a young Harmon Killebrew, who played a couple games at shortstop that year and so was able to replace the hopeless Jose Valdivielso. Mickey McDermott had a reasonable ERA and could actually hit, which meant that I selected non-DH games.

So no kidding, about ten years ago I'm listening to sports talk radio and one of the announcers was talking about Micro League Baseball and how he loved to play the 1955 Washington Senators. I just about drove off the road laughing.
Posted by Pat at 5:28 PM

I remember the game with the spinner - my friends and I played it hour after hour - it's where I learned high homer potential comes with high strike out potential. (And that Don Drysdale was a fair hitter!).

Wish I could remember the name of the game.

For me it was the Sports Illustrated dice game...both baseball and football (pro and college). Hours of fun with my younger brother. Escaping into the fun of these games made the worst days of early teenage life bearable. Same kind of "slipping into another world" that comics and books gave me.