I got the hankering to read a bunch of Metal Men issues in a row, and rather than try to cover the plots and such I thought it might be more interesting to talk about overall impressions from the run.

First, there is more continuity in this series of Metal Men issues than I remembered.  The stories don't always end with cliffhangers, but they often have unresolved problems that are covered in the following issue.  For example, in #2, Tina invents a robot Doc, who turns out to be evil.  She ties him and a plutonium robot who's about to explode to a rocket headed for the moon.  It blows up in flight, "killing" all three.  In the next issue: 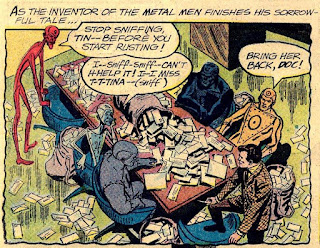 So they go to the moon but they can't recover enough of Tina to revive here.  So he creates a new platinum robot, but this time Doc has "fixed" her responsometer: 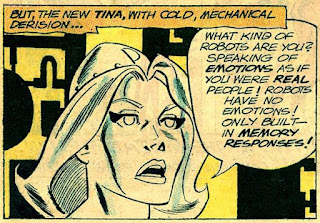 Doc soon discovers the problem with perfect responsometers; they don't think for themselves:

His last command was to catch him, but she fails to bring him back to the surface, and he only survives because the other Metal Men save him. So he scraps the new platinum robot and they return to the moon and eventually find enough of Tina to revive her, gushing her love for Doc and all.

At the end of that story, Tin is lost in space, having turned himself into a can to capture a giant amoeba from the moon that came back with Tina.  So the next several issues involve the Metal Men rescuing Tin, first from space and then from the clutches of a mad robot queen on another world.

There is certainly plenty of bickering going on within the group; it is obvious that Robert Kanigher, who both wrote and edited the series was picking up on Stan Lee's efforts with the Fantastic Four.  Mercury's always riding Tin and Tina and Doc is constantly frustrated at her amorous advances towards him.

So that's two elements of the Marvel magic that are featured in the Metal Men.  What are the differences?

1. The pressure is never racheted up progressively.  Instead, there is a threat, then a resolution, then another threat and a resolution.  I've talked a bit about George M. Cohan's famous description of a three-act play: "In Act I, you get the hero up a tree.  In Act II, you throw stones at him.  In Act III, you get him down from the tree."  Kanigher always made sure to get the hero down from the tree before throwing stones at him. 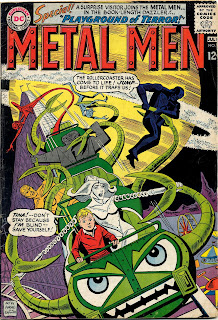 They're not really menacing, just kind of clownish.  And it does stretch credulity a bit that the Metal Men keep finding these other planets where there are robot rulers and attacking amusement rides.

The one really interesting set of villains is the Gas Gang, who appear in #6 and again in #10: 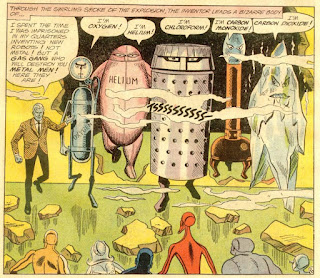 Although there's really no particularly logical reason why chloroform, for example, would affect robots, who presumably don't breathe.

The series is not without its share of amusing moments.  For example, when one of Doc's model girlfriends mocks Tina: 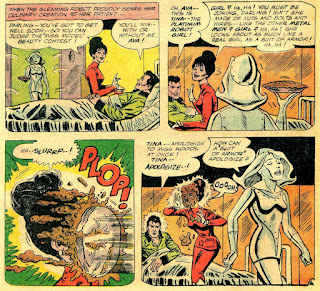 The romantic tension between Doc and Tina is well-handled.  As readers we all wanted Doc to recognize Tina as his true love; however, realistically Doc has a very good point:

The educational aspect is frequently mentioned in the letters to the editor, but this mostly consists of mentioning the melting/boiling points of the various metals and Mercury's frequent observation that he's the only metal that's liquid at room temperature. Overall, I found the run entertaining and while silly at times it's not tiresome. I was not a fan of Andru and Esposito's art as a youngster, but I confess that it's grown on me over the years.
Posted by Pat at 6:12 AM

They really did a good job with the Doc/Tina relationship, especially showing that he's not as unmoved by her as he claims (which probably explains why he's always grumbling about her not acting like a robot when none of the male robots are emotionless machines either).
I also liked the bit in #8 (if I have it right) where the MM tell the blind boy that even if every other scientist in the world has failed to cure him, they know Doc can do it.-Fraser

Fraser, I liked it too, except I thought Kanigher then blew it by not having Doc cure the boy. Instead he was cured purely by a fluke, and not just once but twice.