Why All the Women?

This came up as part of a discussion over at the Fortress Keeper's. Noting the strong female character of June Walker (from Challengers of the Unknown) the FK writes:

June Walker, the unofficial fifth Challenger, occupied a rather unique and definitely unheralded space in comics history – a strong female character that solved problems with her wits. Heck, she didn’t even wear a revealing outfit when springing into action!

And let’s face it, fan people, how many times have we seen a comic where the male leads marvel over a heroine’s prowess while she poses in a manner that states, rather powerfully, that she not only deserves but expects their respect!

(An aside: Actually June Robbins is the usual name of the character; the "Walker" used in this issue is a mistake by the writer.)

What is interesting is that June was hardly alone; there were a whole slew of female characters popping up at DC. Let's put together a timeline:

Usually when something like this happens suddenly, I can point to overall changes in society that were driving the comics. For example, we see covers like this one and it's not hard to understand the cultural context: 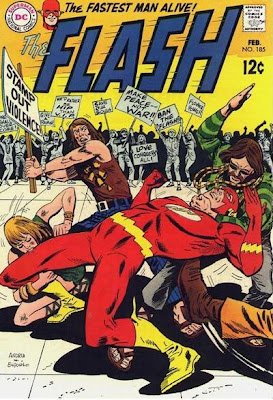 Long-haired demonstrators carrying signs were not exactly a novelty in 1969. BTW, the trio attacking the Flash were aliens disguised to look like hippies.

But I have to admit that I'm not aware of an strong social movement of women that could account for their sudden emergence as independent characters in the DC universe in the late 1950s. Remember, beyond these examples you have the DC girlfriends of the Silver Age (all introduced in the same general era) who were also non-traditional females. Iris West was a reporter, Carol Ferris ran an aircraft manufacturing company, Jean Loring was an attorney and Shiera Hall was a policewoman/museum curator.

Why was this happening back then? It's not as if comics are often ahead of their time; in fact they're generally a lagging cultural indicator. Was DC simply trying to market more to girls while maintaining their core readership of boys? Was there a sense that the girls of the baby boom generation were going to be much more independent and achieve more in the outside world than their mothers?

It's not as if this continued. The first Aquagirl only had that one appearance; Julius Schwartz banished Batwoman and Batgirl when he launched the New Look Batman and Miss Arrowette disappeared along with Green Arrow. Lady Blackhawk did become a semi-regular in the Blackhawk series. Supergirl became the backup feature in Action but did not get her own mag until 1969.

I'm interested in your answers; feel free to blog it (I'll link in a followup post) or post some thoughts in the comments.
Posted by Pat at 10:18 AM