The Superman story qualifies as a fairly idiotic story in the Action Comics catalogue. Superman meets a super-powered woman and they apparently fall in love, much to the dismay of Lois Lane. But in the end it was all a trick to fool the invading aliens (like that never happened ten million times in the Silver Age).

Of course, in the end, the super-powered woman turns out to be Supergirl, which is rather embarrassing since the cover and one panel show Superman kissing her rather passionately: 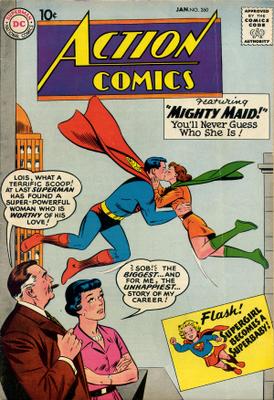 The Supergirl feature itself is a rather pedestrian "turn into a baby" story that DC was fond of back in the 1960s. There are numerous ridiculous examples of this plot device. In this one, Supergirl (still operating secretly) saves an old man from drowning in an pool by pushing him out of the water and onto land. Of course, it turns out that the pool contains the legendary Fountain of Youth, and the old man becomes a young man, while Supergirl becomes a baby, in which guise she manages to get some crooks arrested.
Posted by Pat at 11:16 PM

"Return of the Jedi" revealed that Luke and Leia were siblings, so many fans cringe while re-watching the previous episode, "The Empire Strikes Back." It has a scene where she kisses him passionately. The cover of Action #260 may provoke a similar reaction for a similar reason.