Although the more famous "relevant" comics came at the end of the Silver Age, there were several earlier attempts. Here's an amusing story from Superman #114, July 1957: 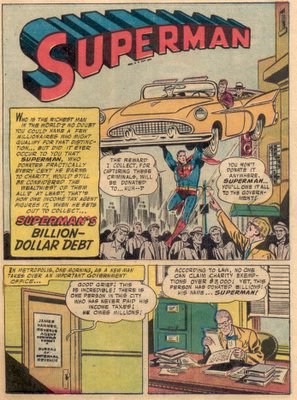 Not even Superman can avoid the taxman! In the story, Superman owes a billion dollars to the government, and must pay up by the next day. But every time he tries getting something valuable he finds a better use for it than paying the debt--hospitals need the radium he digs out of the ground, for example. In the end, a compromise is reached.

This is only one of several Silver Age stories I can think of that featured the emerging snares of the postwar era. For example, in Batman #91, the Caped Crusader had to deal with "Batman's Publicity Agent", an overagressive promoter. In the following issue, "The Fan Mail of Danger", Batman is forced to hire a secretary when his fanmail starts to pile up. There was also a story about Superman at some point where he had to purchase life insurance, and as a result the insurance company begins bugging him not to engage in so many risky events.
Posted by Pat at 1:48 PM