Most of the superheroes in the DC universe had some method or other of traveling through time. Batman had Professor Nichols, who initially appeared to project him and Robin into the past via hypnosis, a preposterous notion that DC covered up for years by throwing more and more scientific-looking instruments into the room.

Flash had his Cosmic Treadmill, a definite forerunner of the exercise machine gathering dust in many basements across America. The Atom had the Time Pool. Superman could just fly in a tight circle for awhile and he'd automatically go forwards and backwards in time.

For awhile DC even standardized the look of a time machine for their characters who had no other way to travel through the ages: 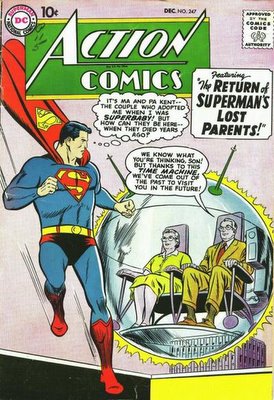 The basic glass sphere would remain constant for most of the Silver Age. Many of the machines had skids, like a helicopter, or else a tripod arrangement for stability when on the ground.

The crucial element of time travel that DC established first appeared in a Superboy story, The Impossible Mission, in Superboy #85. Superboy decided to travel back in time to save President Lincoln from John Wilkes Booth's bullet. But when he got back there, he encountered the adult Luthor, who had also traveled backwards in time for some plot. Luthor, thinking Superboy was onto his schemes, managed to paralyze Superboy with a piece of red Kryptonite. When the commotion arises at the Ford Theatre, across from Luthor's hotel room, Lex realizes he has helped to kill the greatest President the country ever had. Surprisingly he seems genuinely upset and guilt-ridden. But the lesson that Superboy takes from this escapade is that you cannot go back in time and change history. And for the most part, DC stuck with that rule for the rest of the Silver Age.
Posted by Pat at 10:43 PM

I read over your blog, and i found it inquisitive, you may find My Blog interesting. So please Click Here To Read My Blog