In the late 1950s, DC began introducing female counterparts to their male heroes. Batman had Batwoman, Superman had Supergirl, and Blackhawk had Lady Blackhawk. Originally introduced in Blackhawk #133 (February 1959), Zinda Blake (her real name) wanted to become a member of the Blackhawks. She proves her worth by saving the team from a jungle stampede, and introduces herself rather dramatically: 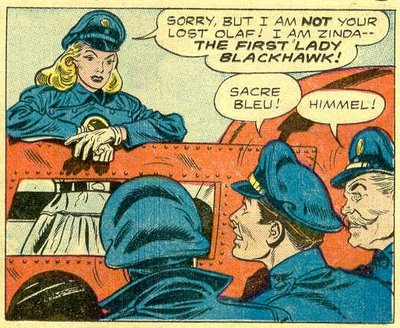 She's been training for years to become skilled at the tasks the team members perform. Unfortunately for her, Rule 14 (c) of the Blackhawk Code says "No Dames Allowed!" 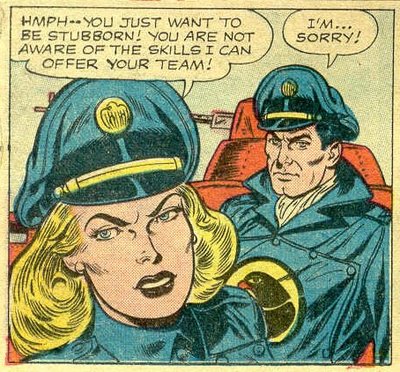 But of course, she's undeterred. She gets the team caught, but manages to help them escape. They are sneaking up on the crooks when: 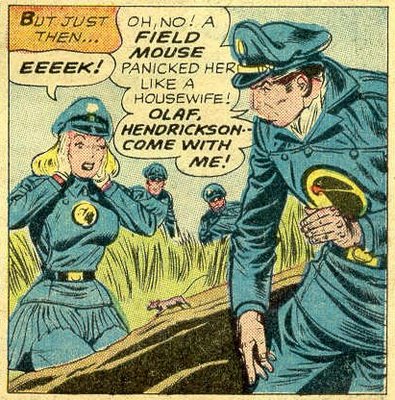 But once again she saves the day by kayoing the crooks with gas that she keeps in the heels of her boots. In the end, she notes that she's not quite ready to be a Blackhawk, but she's determined to overcome her weaknesses.

She returned many times over the years, and appears to have been inducted as a full-fledged member of the team in Blackhawk #140 (don't have the story to check, but her next appearance opens with this line): 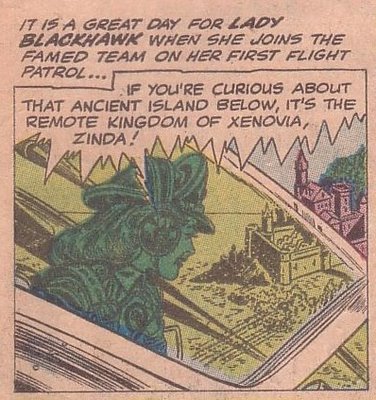 This is unusual compared with the other female characters that DC added to their line: Batwoman was initially forbidden by Batman to operate, while Supergirl had to act as Superman's "secret weapon".

Lady Blackhawk appeared regularly over the next few years, in #143, #147, #151, #155, #161, #163, and many other issues. Things changed dramatically for Zinda in Blackhawk #200. While battling their old foe, Killer Shark, the Blackhawks are startled to note that he has a new accomplice: 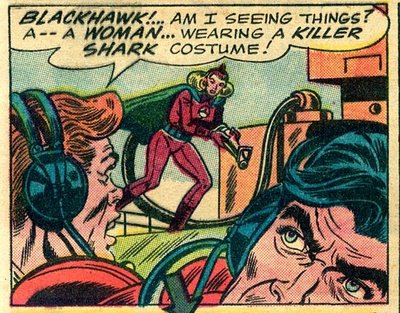 They quickly realize it's Lady Blackhawk, who has suddenly gone bad. Killer Shark reveals that he obtained a chemical from a scientist that would change anybody from good to bad. He kidnapped Zinda and: 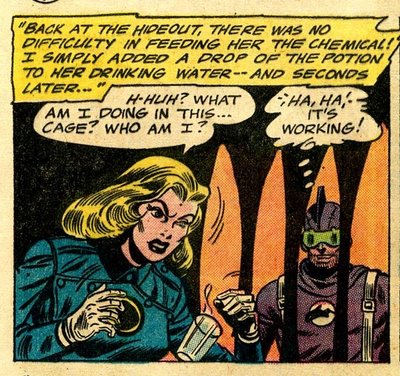 At the end of this story, Zinda escapes, still in her Queen Killer Shark persona. Killer Shark himself is brought to justic. Queenie returns in Blackhawk #204. In this story, Blackhawk forces down Zinda's plane in the water. The shock jolts her back into her normal self. However Killer Shark is free again and he attempts to blast her with a concentrated dose of the formula. Unfortunately it hits Blackhawk and he is turned evil.

In the end of the story, Zinda manages to hit Blackhawk with the ray to reverse his transformation. Unfortunately, it turns her evil again and she escapes (although Killer Shark is caught once again).

In Blackhawk #216, Killer Shark is on the loose again, racing the Blackhawks to an inventor's secret weapons. Queenie is with him, and Blackhawk reluctantly orders the downing of their jet, which crashes. That turns out to be a scheme, however, as they beat the Blackhawks to the weapons. In a memorable moment, they use the Blackhawks as a human bridge to get the third weapon. 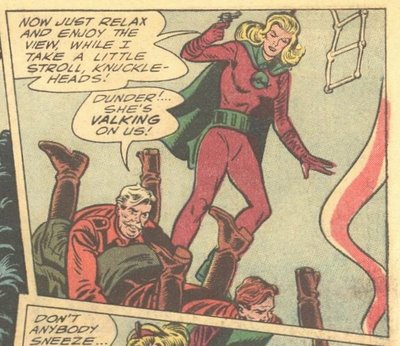 In the end of this story, Queen Killer Shark and her boyfriend are finally captured. Can the Blackhawks find a cure to bring back Lady Blackhawk?

She next appeared in Blackhawk #225. Apparently the writer and editor had forgotten that Killer Shark and Zinda were captured in their last appearance, since the story begins with them on the loose. This time Queenie wants her new boyfriend to capture all the Blackhawks for her. He does so, but she pulls a double cross on him, locking them all in a bathysphere that will roam under the water for years. Killer Shark escapes and steals Zinda's gun. But the Blackhawks have also escaped and they win the final battle. However, once again there's no resolution at the end of the story.

The storyline finally wraps up in Blackhawk #228. The Blackhawks are assigned to protect a famed pirate named Jolly Roger. But Blackhawk discovers that Queen Killer Shark is once again loose and gunning for the freebooter. He prevents her from shooting Roger, but then: 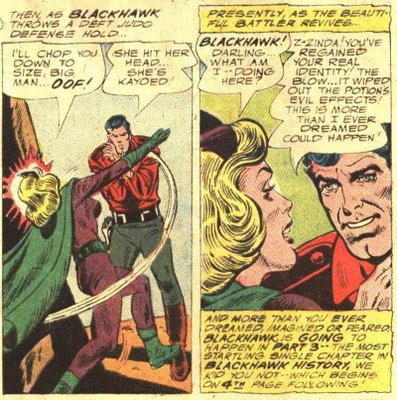 Unfortunately, Lady Blackhawk was not allowed to enjoy her return to normalcy, because the Blackhawk series had hit the iceberg. In #228, they were described as the "Junk-Heap Heroes", which meant that DC had decided to try to update them to modern times. They were about to get new identities and a new mission as members of G.E.O.R.G.E (stands for Group for Extermination Of Revenge, Greed and Evil). The series limped on for another year or so before finally giving up the ghost, with Lady Blackhawk only making limited appearances. At the time, Blackhawk was the fourth longest-running magazine dedicated to one feature, after Superman, Batman and Wonder Woman.
Posted by Pat at 11:28 PM