This is another excellent run of Spiderman, with several classics and no clunkers.

ASM #28 features Peter Parker's graduation from high school. That may not seem like much, but Dick Grayson had been in high school for about 25 years at that point (although he too would move on to college before the end of the Silver Age).

Spidey faces a new foe, the Molten Man. Old Molty got splashed with some "liquid metal alloy" (more Stan Lee science) and somehow the metal fused with his body, turning him into a foe with hard fists and a virtually indestructible body. Spidey is able to defeat him only by hand and foot-cuffing him with his webbing.

Then comes Peter's graduation ceremony. He's thrilled when he is awarded a scholarship to Empire State University because he has achieved the highest grade point average in the history of his high school. But he's deflated a bit by Liz Allen (incorrectly identified earlier in the issue as Liz "Hilton") here: 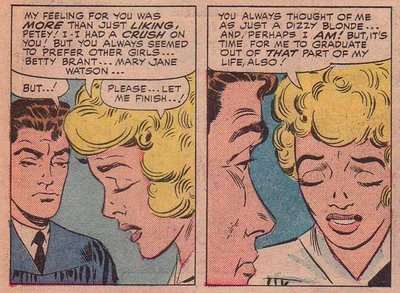 That's a pretty remarkable little sequence for a comic book.

In Spiderman #29, Max Gargan, aka the Scorpion, returns. He breaks out of prison by using his strong tail like a spring. He's still after JJJ, although that doesn't make a lot of sense, since presumably by now the authorities know who the Scorpion really is. We also learn that Ned Leeds has returned from his assignment in Europe, and is dating Betty Brant again, and that Aunt May has been feeling a little ill lately.

Spiderman #30 begins another string of classics. Webhead must tackle a clever cat-burglar, as well as "the Cat". This part always confused me because at several points in the story the cat-burglar himself is referred to as "the Cat", but that appears to be a mistake.

In an amusing twist, J. Jonah Jameson is robbed by the cat-burglar and offers a reward for his capture. Spidey decides it would be fun to earn that reward, and teases the newsman about it. Of course JJJ has a horrible daydream: 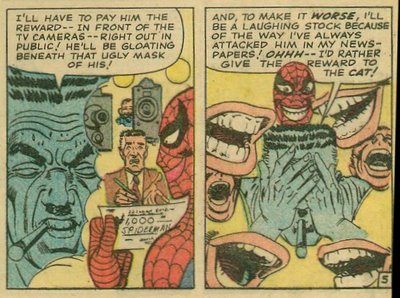 So he sends Foswell out to try to find the cat-burglar with his underworld contacts. Meanwhile, Ned has asked Betty Brant to marry him. She breaks the news to Peter, who realizes that he must take the risk of admitting his double-identity to Betty. But as he leads into talking about Spiderman she shudders, explaining that what initially drew her to Peter was his studiousness and hard work. She could never marry somebody who worked in a dangerous field after the death of her brother. Peter storms out, leaving Betty crying that he's the one she loves.

That pretty much clears the decks on the romance front for old Petey, and to add injury to insult, he doesn't win the reward money for capturing the cat-burglar.

By ASM #31, Stan must have recognized the mistake he'd made with "the Cat" because the villain Peter must find is now known as "the Master Planner". Probably designs new home communities, right?

Nope, he really does seem to be a planning genius with every contingency covered. This issue also features Peter Parker's first days at college. Unfortunately for him, his aunt collapses and is in the hospital, so he's far too distracted to make friends early and everybody begins to think he's a snob, including a young lady who we'll be seeing quite a bit more of in the Silver Age: 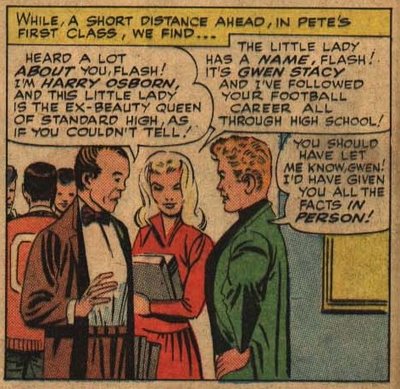 In #32, we learn the identity of the Master Planner: it's Doctor Octopus making his first appearance since ASM Annual #1. Meanwhile Peter gets bad news about Aunt May; it turns out that she's got some radioactivity in her bloodstream, no doubt caused by the transfusion she received from Peter way back in ASM #10. But it's causing her problems.

Peter realizes that perhaps Curt Connors (fka the Lizard) could help him save Aunt May. They order a rare chemical from the West Coast, but it is stolen by the Master Planner. Spidey must go into action again to save her. He begins busting up crooks all over town, looking for information on the Master Planner. Finally he tracks the hideout down and battles with Doc Ock. Unfortunately, their battle destroys much of the undersea hideout, and at the end of the story Spiderman is trapped under a giant machine, only feet away from the chemicals he needs to save Aunt May.

The saga concludes with ASM #33. Spidey is still trapped under the machinery, but he is determined not to let Aunt May die the way Uncle Ben did. And thus begins one of the most famous sequences in the history of comics: 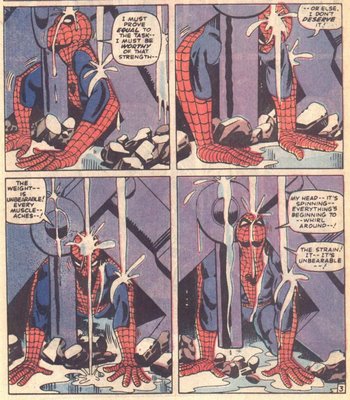 Spidey eventually gets free of the machine, but then he must fight his way through the Master Planner's henchmen. Once again his determination wins out: 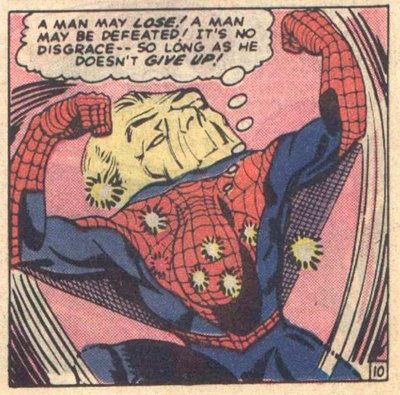 Not too much doubt in my mind that Steve Ditko wrote the dialogue for that panel; it's classic Ayn Rand, and Ditko was a well-known disciple of hers. And in the end: 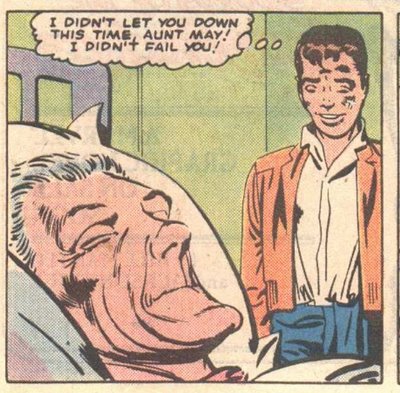 Just a superb series of stories capped by The Final Chapter, one of the greatest moments in the history of comic literature.
Posted by Pat at 8:04 AM