Hawkman in Mystery in Space

DC had a tough time launching Hawkman in the 1960s. The first three tryouts, in Brave & Bold #34-36 apparently did not sell well enough to justify giving him his own book. DC gave it another run in B&B #42-44. When those did not work out as well as planned, DC shifted the character to Mystery in Space effective with #87. In addition, Joe Kubert was taken off the art chores. Kubert had drawn Hawkman in the Golden Age, but his style did not seem to impress superhero fans (although his war comics sold well at the time).

DC handed the character to Murphy Anderson. Anderson had mostly been a science-fiction penciller for DC, although he also did inks for many titles. A fine artist, Anderson had a tight line and a terrific eye for facial expressions. Sadly, Anderson's assignment to Hawkman may have prompted the end of the terrific Atomic Knights series which he had created in Strange Adventures; the last episode of that feature appeared two months after the first MIS Hawkman.

The first story in Mystery in Space introduced a frequently recurring villain known as Ira Quimby, aka IQ. Quimby at first could think up brilliant criminal schemes but he was unable to put them into action until one day at the Metropolitan Museum, Quimby is turned into a genius by light rays falling on a glowing stone. Now his great ideas work because he is able to invent amazing machines that make them possible.

As it happens, Carter Hall and his wife Shiera are visiting New York at the time and they witness IQ's first major crime. However, he brilliantly manages to come up with a way to defeat the Winged Wonders. Quimby later figures out that the stone is behind his sudden brilliance, but his attempt to steal it results in chips of the stone being left behind. Hawkman is able to use these to defeat Quimby.

Adam Strange makes a brief appearance in the story in his archaeologist guise: 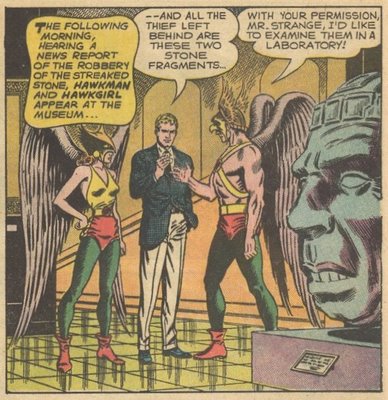 One particularly oddball facet of the Hawkman series was Mavis Trent. Mavis worked at the same museum as Carter Hall, and decided to set her cap for Hawkman after meeting him, even though he was obviously partnered with Hawkgirl. The heat gets turned up on this romantic triangle a notch in MIS #88, where Mavis impersonates Hawkgirl after accidentally finding her costume in the museum. Because Mavis has discovered a connection between Hawkman and the museum, they worry that she'll connect Carter Hall and Shiera with Hawkman and Hawkgirl, so they convince Police Commissioner Emmett (who knows their secret identities) to imply without quite lying to Mavis that Hawkman is still single.

The highlight of Hawkman's brief run in Mystery in Space came in MIS #90. The story "Planets in Peril" featured a book-length team-up between Hawkman and Adam Strange. Earth is suddenly transported to an orbit around Rann's sun, but on the opposite side from Rann, and with a slightly faster orbit, which means the two planets will collide eventually. But with the heroes of two worlds working together, they manage to defeat the villain who caused the Earth to be teleported to Alpha Centauri.
Posted by Pat at 9:19 PM