Lois Lane famously appeared alongside Clark Kent in Action Comics #1. In the early Superman stories, Lois appears to despise Clark, who loves her and longs to win her himself, although it quickly becomes apparent that she's more interested in Superman.

Lois earned a feature of her own right in Superman #28. Although the title of the feature may seem sexist to us now, "Lois Lane, Girl Reporter" was accurate at the time. Many newspapers had a "girl reporter" as something of a novelty--Nellie Bly being the most famous. The stories were generally four pages long and emphasized comedy over drama, much like the Alfred series that was printed in Batman around the same time.

In 1954, a Superman supporting character was given a solo book, but it wasn't Lois Lane or even editor Perry White. Rather it was Jimmy Olsen. Olsen had been a relatively minor character in the comic books up till that time. In fact, he was so minor that in Superman #72, a character looking exactly like the Silver Age Olsen appeared, as Perry White's son!

Of course, Olsen had been a much more significant character in both the Superman radio show and on television, which is the most probable reason for the sudden launch of Superman's Pal, Jimmy Olsen.

Lois didn't get her shot until Showcase #9, July-August 1957. She had one more tryout in the following issue, and in March-April 1958 Lois Lane #1 appeared on the newsstands. That issue also included the first artwork by the man who was to define Lois for the rest of the Silver Age, Kurt Schaffenberger.

Schaffenberger had drawn Captain Marvel back in the Golden Age, and he seemed to sense that Lois Lane needed to be slightly different from the ultra-serious Superman series. The covers often featured Lois or Superman in a particularly humiliating, yet comical situation, such as this: 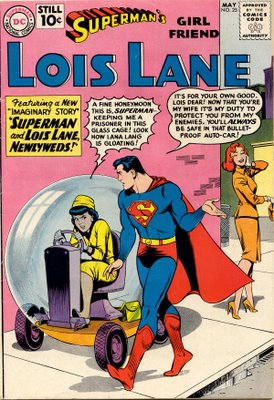 The stories from this era are always a guilty pleasure. They have just the right amount of whimsical humor without quite dissolving into farce. A frequent theme had Lois being wooed by another man, either wealthy or powerful. Of course, Lois' goal was always to marry Superman, and there was a continuing "imaginary" series including the above story about the trials and tribulations of being married to the Man of Steel.
Posted by Pat at 11:49 AM