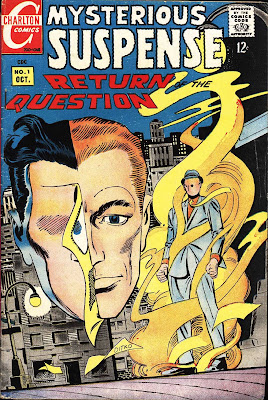 This story was actually published by cover date in October 1968, and thus arguably falls between Blue Beetle #4 (Dec 1967) and Blue Beetle #5 (Nov 1968). What happened? I'd guess that Charlton had issues in the pipeline when the Blue Beetle series was canceled and they decided to put them out anyway. The story in Mysterious Suspense appears to have been intended as a multipart backup story. Charlton added a splash page by another artist to make it look more like a normal issue.

In the story, the Question observes big-time mobster, Max Kroe, palling around with tycoon Jason Ord. It is clear to him that Ord is crooked. Meanwhile, Vic Sage (the Question's secret identity) is losing sponsors for his news broadcasts, thanks to the backstabbers at the studio. 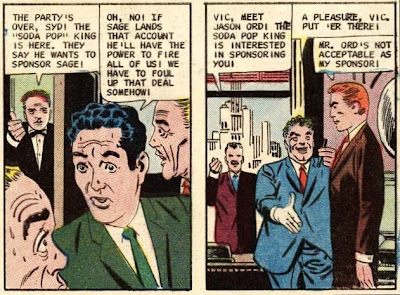 Vic tells the station owner his suspicions about Ord, but can't be more specific without revealing his identity as the Question. His own staff sticks with him, but some of the others urge him to bend a little: 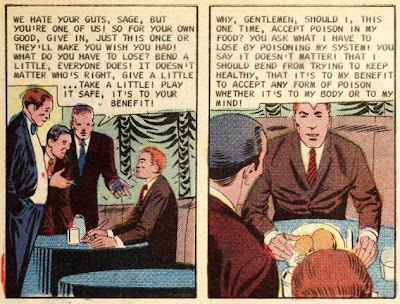 On one level, Vic is talking about the events in the story, but on another he's expressing Ayn Rand's objectivist philosophy at the same time. Rand was a firm believer in unfettered capitalism, and an ardent anti-communist. But she was also opposed to halfway measures like socialism or even liberalism. At one point she was quoted as saying, "There is a right way and a wrong way, but the middle is always evil."

What the men are offering Vic is the middle. He doesn't have to condone Ord's activities, just accept his money. But he's made of sterner stuff than that. Sage is given a two-week deadline to prove his charges against Ord.

And being opinionated, he does not soften his message: 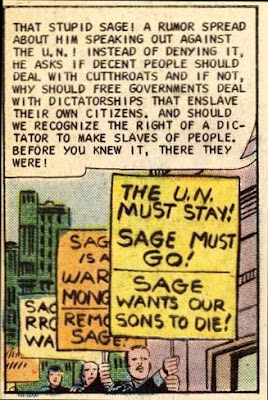 Let me emphasize here that what is interesting about this comic is not Ditko's opinion on political issues of the day. Rather it is the creator of one of the greatest superheroes of all time telling us what he thinks makes a hero. That is a compelling topic and one worth exploring here, not whether the US should be involved in the UN. 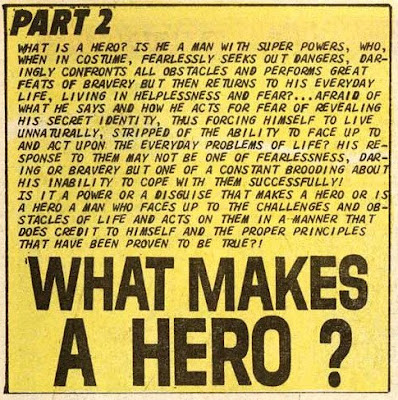 In Part II, Ditko ratchets up the pressure on Vic. His assistant, Al, is framed on murder charges by Kroe and Ord.

Some very complex themes are being discussed in this comic book that were almost certainly going right over the heads of any teenage boys reading it.

The Question manages to find the identity of the real killer, but before he can be apprehended, Kroe bumps him off. Reasoning that he has to go to the top on the case, the Question calls Ord and threatens him with blackmail. Ord and Kroe meet in a warehouse, where Vic is captured by a gunman. Things look pretty grim, but Vic manages to hide. By cleverly switching back and forth from the Question, Sage convinces the crooks they're facing two men.

Meanwhile, Vic is about to be fired by the station manager, much to the delight of the loathsome Syd. Nora proves that she's good for more than looking pretty: 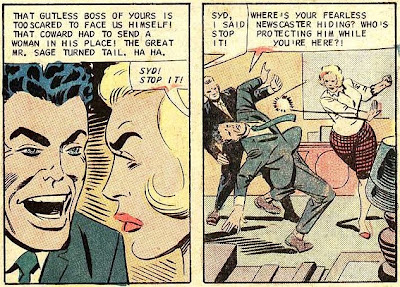 Vic manages to find a phone and call the cops for help. He gets Kroe and Ord on tape admitting to their criminal activities, and the cops arrive in time to save him from being killed by Ord, who has already shot Kroe.

Syd quickly rushes on the air to break the story, and takes the lion's share of the credit. What will Vic do? 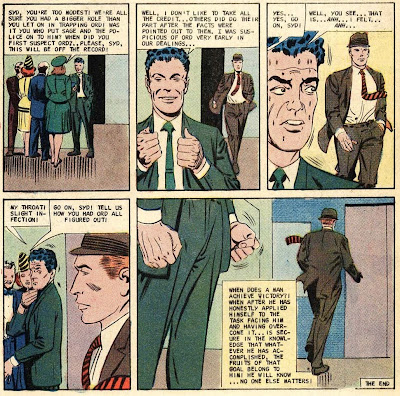 Comments: As I discussed above, while the political aspects of Ditko's story are entertaining and challenging, the real significance of the comic is the debate over what makes a hero. Ditko lost the debate back then, but in my opinion, time and history have proven him correct. As superheroes lost their purity, their unwavering belief in the righteousness of their cause, they also lost that special quality that made them iconic heroes, a standard that boys could measure themselves against knowing they might never achieve that status themselves, but that it was worth striving to attain nevertheless.

Incidentally, since it has come up that this post is included in the Pennsylvania State Library, my name for attribution purposes is Pat Curley.
Posted by Pat at 9:50 AM

Email ThisBlogThis!Share to TwitterShare to FacebookShare to Pinterest
Labels: Charlton Comics, Steve Ditko, The Question
Newer Post Older Post Home
Contact me: pcurley49+6 at gmail dot com (do the arithmetic to get a usable email addy).