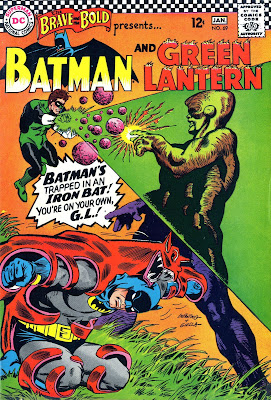 Lord knows the Silver Age was not the best era for Batman, but even in the depths of that era he rarely appeared in a stinker quite as bad as this one. Note when reading this review that although the cover above is not exactly dynamic and thrilling, it's also completely bogus. The scene depicted on the cover never appears inside the comic book.

The story opens with residents of Gotham City getting quite an odd sight: 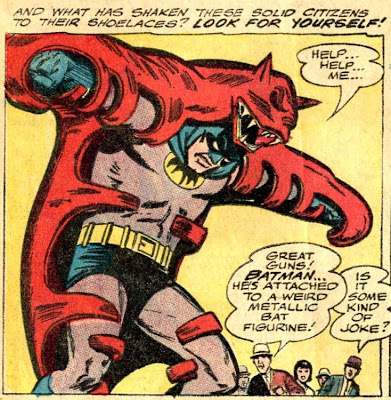 Now, it looks to me like if he twisted a little bit, he could get out of that, but apparently not. Commissioner Gordon is summoned and after a joke about how the Policemen's Ball is coming up, but it's not a masquerade, he asks how Batman got trapped. Batman explains that he had spring fever, and went for a drive in the country. After falling asleep in a field he awoke to find himself trapped.

They take him to the police lab, but the metal proves impervious to any efforts to remove the mechanical bat from Batman. So he asks them to contact Green Lantern, and meet him at dawn in the park. And he shuffles away. No, I am not kidding: 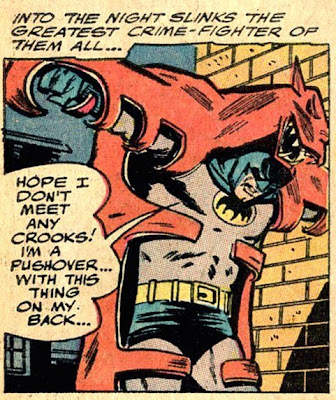 Bear in mind that they just transported him to the lab with a police escort, but now he's walking through Gotham alone? At night? Can we say convenient to the needs of the plot?

Fortunately nothing happens and the next morning GL cuts Batman free. Wow, that was pretty quick resolution of the story on page 5. But a few minutes later as GL flies away he spots Batman in the Whirly-Bat, who doesn't know anything about being trapped. So it was clearly a plot to get power from the power ring, which suggests that they are facing the Time Commander, a villain they had previously encountered in Brave & Bold #59 who used the same MO.

Indeed it is he, as we learn in the next sequence, where the Time Commander indulges himself in a little mumbo-jumbo monologue:

As names of dreaded things go, Cosmo is, shall we say, right up there with Shagg and Fin Fang Foom. Not exactly calculated to keep kids awake at night.

The Time Commander succeeds in bringing him back but there's just no gratitude these days: 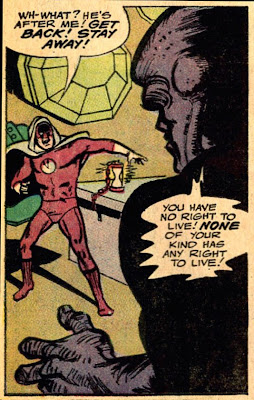 It turns out that Cosmo has absorbed star power over the years, and he attacks the Time Commander with that, and old TC has to vamoose into a "temporary time plane", leaving Green Lantern and Batman to handle the problem of Cosmo.

They encounter Cosmo as he's tearing down an abandoned building with "emanations from his body". GL discovers that his power ring is useless against Cosmo as he's absorbed energy from the ring already. They observe that Cosmo pores through the rubble of the building as if he's looking for something. Batman calls the Police Department and learns that the former owner of the building was Carruthers (who was the scientist who created Cosmo).

Batman and GL find Carruther's diary in the rubble which gives Batman his next clue: 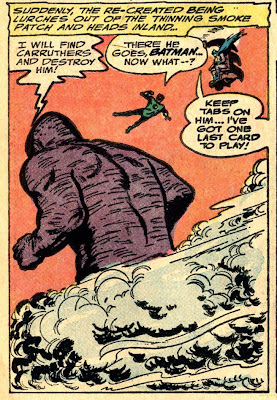 Now, note that Batman is in the Whirly Bat there. He dashes off to find Carruthers, who left note in his diary that he particularly liked this one nursing home. And Batman comes back again with Carruthers: 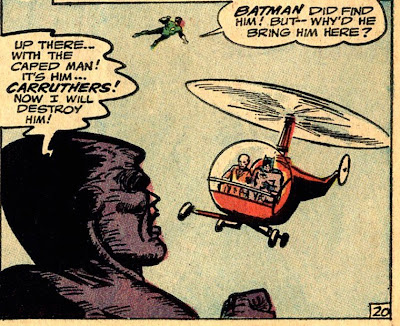 Okay, it would have been pretty gay to have Carruthers sitting on Batman's lap in the Whirly-Bat, but don't you think we are owed some explanation as to this heretofore unseen helicopter? 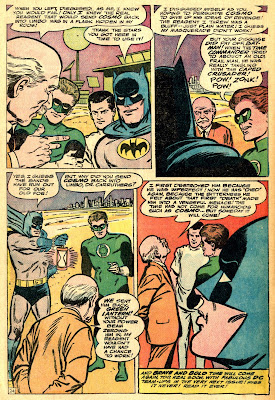 Comments: Painful. Just painful. This was while the Batman TV show was in full swing--note the "Go-Go Chex" on the cover--and while most of the Batman-related comics during that era were mediocre, Brave and Bold managed to take the level of suckage to new lows.

There are many hideous issues of Brave and Bold around this time and it's not hard to figure out the culprit. There are two issues of B&B from 1965-1968 that aren't jaw-dropping bad, and those are the two Black Canary/Starman issues, the only issues that Bob Haney didn't write. You can make an argument for the Metamorpho tryouts being less horrific than most thanks to Ramona Fradon's style, but remember that Haney around 1968 had Neal Adams doing his stories and they still stank on ice (but looked marvelous).
Posted by Pat at 8:16 AM