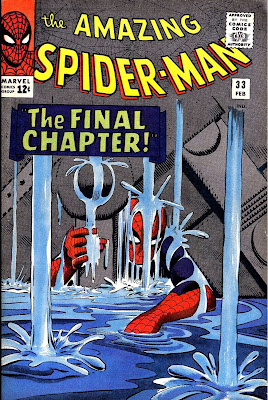 This will be a continuing series where I look at the greatest comics of the Silver Age. The story starts with Amazing Spiderman #30, where a criminal called the Cat shows excellent planning ability until his gang is broken up by Spiderman. In ASM #31, the Cat's name is changed to the Master Planner. In #32, we finally learn the real identity of the Master Planner: Doctor Octopus. We've also discovered that Aunt May is seriously ill; it turns out that she's got a radioactive particle in her blood. Of course this is a reference to Peter's donating blood to Aunt May way back in ASM #10. The only thing that can save her is a rare serum called ISO-36, which is ordered specially from the West Coast.

But when Doc Ock's gang steals the ISO-36, Spiderman goes into action. He locates the entrance to the Master Planner's underwater hideout and battles it out with the goons and the Doc, largely destroying the facility in the process, which leads to a catastrophe: 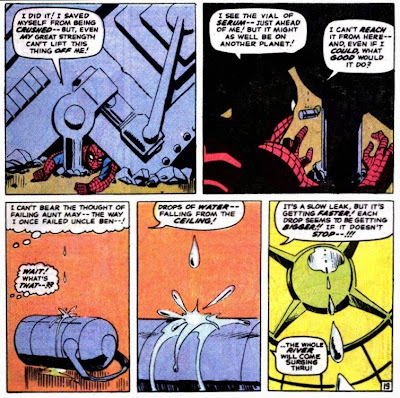 And thus the stage is set for The Final Chapter, and what I consider to be the World's Finest bit of sequential art in the entire Silver Age of Comics: 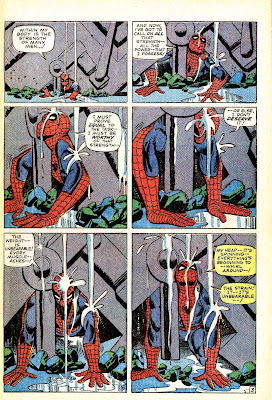 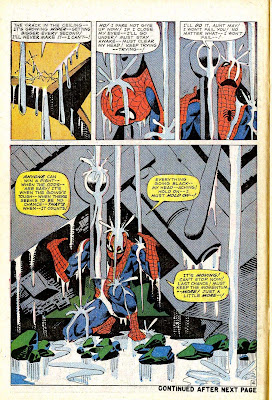 Finally freed of the machine, Spidey discovers that the roof has collapsed. He gets swept along by the rushing water, but manages to hold onto the serum. But his troubles are far from over:

In an oddball moment, Spidey decides to let the gang beat on him for awhile so that he can concentrate on regaining his strength. Then he fights back:

As I have mentioned in the past, there's not much doubt in my mind that Steve Ditko wrote those words; it's pure Ayn Rand. He brings the serum to the doctors and in the end: 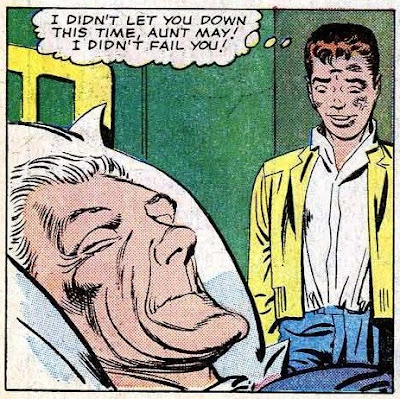 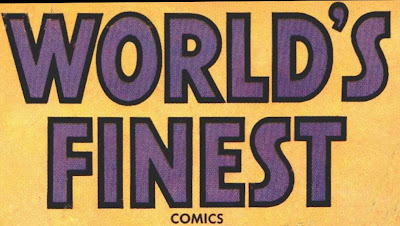 Update: Meekrat had a look a couple months ago at a pair of animated homages to older comics, including a revised version of the opening sequence to ASM #33. Thanks to Mike in the comments for pointing this out!
Posted by Pat at 11:02 AM