I have remarked in the past how secular comics seemed to be in the Silver Age, and this was not exclusive to the Christmas season. Thanksgiving stories also were reduced quite substantially. According to the GCD, there were 16 stories published between 1940 and 1954 with the word "Thanksgiving" in the title, while from 1955-1970, there were only 8 such stories (and one of those was a reprint). I have already remarked on one of those stories, the Atomic Knights tale, Thanksgiving 1990. Here's another, from ACG's Forbidden Worlds #73, which is famous for another reason (which I'll give at the end of the post): 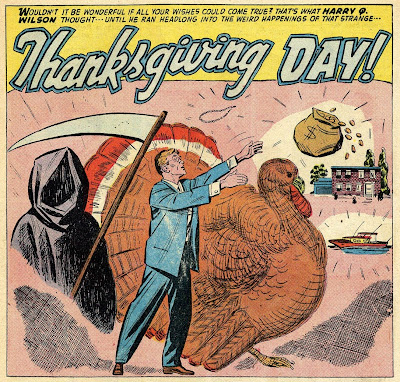 Harry was an ordinary guy with work pressures and not enough money to buy the things he would like for his family. 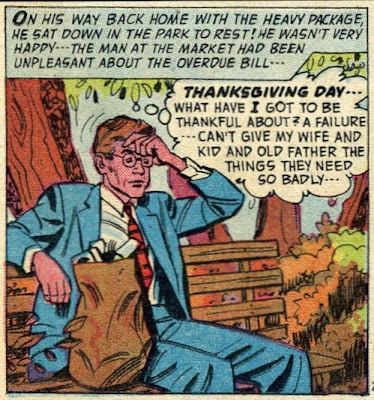 As he sits there on the park bench, he wishes that his financial problems would end. And: 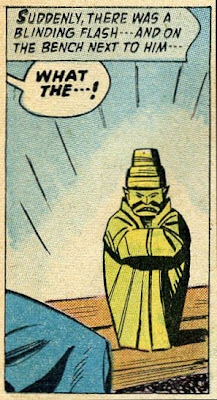 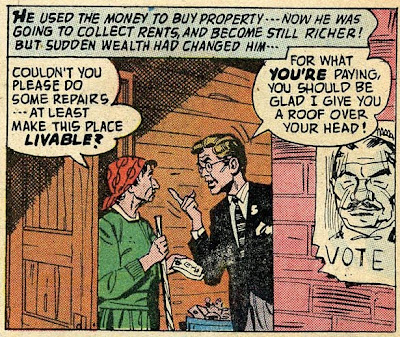 When his father confronts him over his changed behavior, he decides to throw away the idol. But it doesn't work; when he gets home the idol has magically returned to his pocket. So he sells his rental property and invests in the stock market, which (thanks to the idol's advice) does spectacularly well for him. But as he continues to pursue wealth: 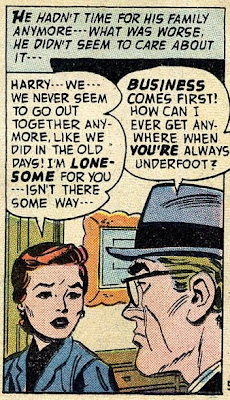 He partners up with another businessman, and they agree that if either dies, the other will be able to buy back his share of the business. But inevitably, the partner becomes an annoyance to Harry and: 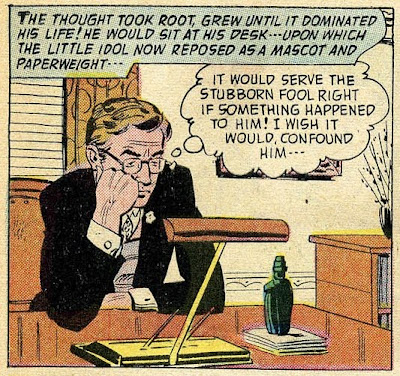 Your wish is the idol's command, and the next thing Harry knows, his partner has fallen out the window to his death. He's horrified but again finds himself unable to rid himself of the idol, or his pathological greed. His son is lonely, so he buys the boy a horse. But tragedy strikes as the boy, inexperienced at riding, is killed. His wife leaves him, and even his father, who had always expressed pride in his son: 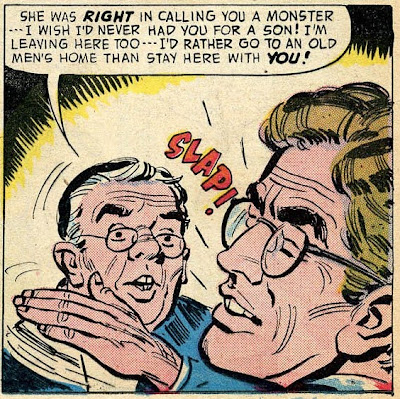 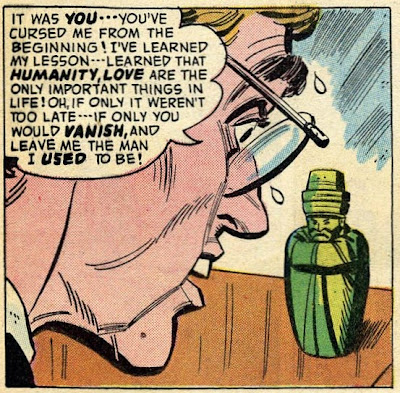 And sure enough, the idol disappears. Harry leaves his magnificent estate behind, and wanders back to his old neighborhood. He sees boys playing and realizes that if he had not found that idol, his son would be out there with them. And then suddenly, there's Bobbie, running up to hug him! And his wife, and his dad, who found the Thanksgiving turkey on the park bench. Yep, somehow Harry's been transported back to the start of the story. 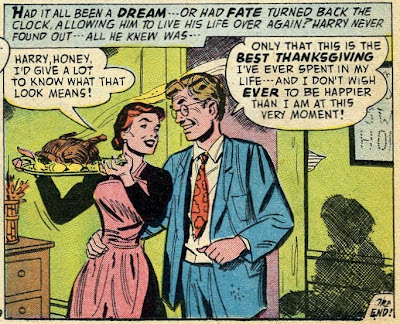 Comments: Wow, what a terrific story! I confess, I got about halfway through it and wondered if it was going to be too depressing for a holiday post. Stories like these, almost certainly from the fertile mind of Richard Hughes (who wrote and edited almost single-handedly the entire ACG line of comics) are why I consider American Comics Group to be the great unknown publisher of the Silver Age.

Why is Forbidden Worlds #73 famous (and the single most valuable comic ACG published in the Silver Age)? It's because of this story: 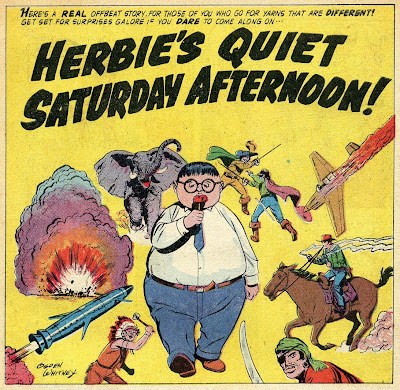 Yep, it's the first appearance of Herbie Popnecker, considered by many to be the greatest character of the ACG line.
Posted by Pat at 8:44 AM