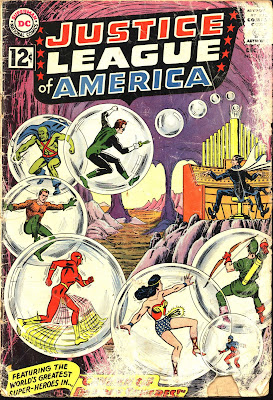 I saw that this comic was mentioned in Tony Isabella's book as one of the 1000 Comic Books You Must Read, and thought it would be worth reviewing in some detail. As you can see, my copy of JLA #16 is not quite mint, so I don't think I'll be sending it off to CGC anytime in the near future.

The story starts with the various members of the JLA heading towards a meeting. Wonder Woman is flying there in her invisible plane, while Green Arrow is taking the Arrow Plane, and they meet, as usual, over the town of Three Corners. But they notice something odd down below.

When they exit their planes, they find themselves compelled to dance along with the rest of the civilians, as does the Atom, who emerges from a local phone line that has been tapped into by a repairman. Things get a little more interesting as a group of crooks target the local bank while everybody's busy. But Green Arrow spots a chance to grab Wonder Woman's rope and tosses it into her hand. Then WW lassos GA and forces him to stop the crooks.

Meanwhile, Green Lantern, Batman and the Martian Manhunter have similarly met up along the way to their meeting, and stop to break up a payroll robbery. Once again the weird music compels them to dance, and once again the group teams up to defeat the crooks. Batman frees some silver iodide crystals from his utility belt, and MM sends them up into some nearby clouds. As the rain pours down around GL's feet, J'onn freezes it, making it impossible for Green Lantern to dance. Thus freed from the spell, Hal is able to capture the crooks.

Superman, Aquaman and the Flash have a similar adventure, and again team up to defeat the crooks. It appears that all of the gangs have been using the musical abilities of the Maestro to pull off their robberies. As they compare notes, the Atom sadly muses: 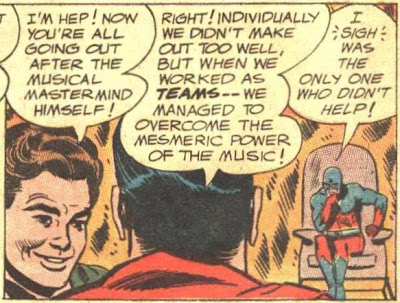 They head off in search of the Maestro, whom they have located in a general area of caves. Sure enough, they find him at his keyboard, but this time they are wearing earplugs so that his music should have no effect. But: 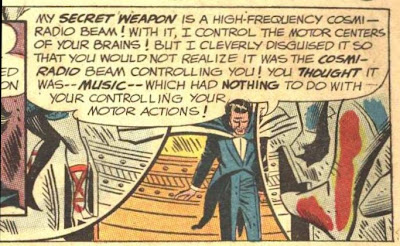 The Maestro reveals that the bubbles he has the JLA trapped within are specially devised for each member. Superman's bubble contains Kryptonite, while GL's bubble saps his willpower and Aquaman's prevents him from telepathically summoning his finny friends, etc. It appears he has finally won, and as we go to the third chapter of the story, the JLA looks defeated. But:

Yep, it was all a bit of fan fiction by "Jerry Thomas". Of course, Jerry Thomas is a composite name, created from two big fans of the Justice League, Jerry Bails and Roy Thomas. So the JLA spends much of the third chapter trying to figure out how they might have been clued into the real scheme of the Maestro. And, not too surprisingly, it is the Atom who figures it out:

Armed with the knowledge that the music was not the real means of hypnotizing the JLA, they would have approached the Cavern of Deadly Spheres with a secret weapon of their own: 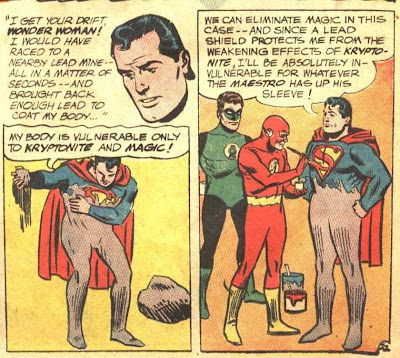 And sure enough, they would have defeated the Maestro.

Comments: Although I am not usually a fan of these kinds of "trick" stories, I must confess that I enjoyed this one thoroughly, especially now that I know a little more about the Bails/Thomas/Julius Schwartz relationship.